OK, so I am getting old. And that means I am getting rather tired of all the anaemic, gutless, and wishy-washy Christianity that I see all around me. I want the real deal, or I want nothing at all. So much of Western Christianity has become so compromised and carnalised that it offers nothing at all to a needy and broken world. 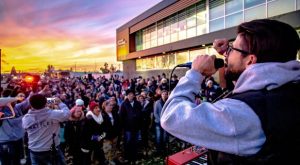 I am always reminded of the amazing Christian missionary C. T. Studd who said this: “Some wish to live within the sound of a chapel bell; I wish to run a rescue mission within a yard of hell.” Yep, that’s it: so sold out for Jesus that you will go where the gospel is so desperately needed.

A new article just appeared on my social media timeline and I am just quite enamoured with what it has to say. The title sure got my attention: “Pastor Starts Church on Steps of Planned Parenthood.”  It is so cool that I will simply offer much of the article. Here is the first half of it:

Pastor Ken Peters was faithfully leading his small church in Spokane, Washington, when a guest preacher’s Sunday sermon grabbed his heart and prompted an unexpected response. That providential moment led to the creation of “The Church at Planned Parenthood” (TCAPP), a monthly gathering of Christians from various churches to worship God, boldly preach the gospel message and spend time in corporate prayer repenting for our nation and for the church’s silence on abortion—while standing together outside of a Planned Parenthood clinic.

We spoke with Pastor Ken to learn more about TCAPP and to understand the impact that this church plant is having nationwide. Below is an edited transcript of our conversation.

Tell me about the pivotal moment that started TCAPP.

I thought, That sounds like church: preaching, worship, and prayer. I felt like the Lord spoke to me and said, “Don’t you dare plant another regular church until your next church campus is the church at Planned Parenthood, an outdoor church.” I got up after the sermon and announced to the congregation that our next church was going to be a church at Planned Parenthood!

My guess is there was surprise and even concern after your passionate proclamation. Describe the reaction.

Ken Peters: My wife looked at me like I was crazy! And Reverend Thomas literally bent over. He said he had never heard of such an idea. It was so simple, yet so profound because he had just proclaimed that the church will win against the gates of hell. Quite frankly, after I made the announcement, I began to doubt. I was afraid. My church was supportive but they waited to see if I would follow through on my promise.

Two months later, in October 2018, you held the first service of the new church plant. What happened?

Ken Peters: I was expecting my wife and maybe 20 people to show up—maybe a couple of elders and deacons from the church because they felt obligated. But 175 people came for the first service! The church was so gracious—they followed their crazy leader and responded.

Describe the atmosphere at a TCAPP service.

Ken Peters: You can literally feel the spiritual warfare. When it’s almost time to start, people are coming in from everywhere because they have to park in the surrounding neighborhoods and walk because Planned Parenthood won’t let us use their parking lot. The police are there with five to eight police cars with their lights flashing. They have to put up barricades on both sides of the street because we’ve attracted a number of protesters.

Ken Peters: We are not a protest. We do not engage with the protesters. We are there to call upon the Lord. It’s spiritual warfare, not warfare of the flesh. We are having church, believing that the gates of hell will not prevail.

You are following the model of worship, prayer and preaching, but is your preaching geared towards pro-life issues?

Ken Peters: It’s naturally going to be more focused on the life issue because we’re right next to Planned Parenthood. If the preachers want to preach the gospel, that’s what they do. A picture is worth a thousand words when you have Christians out there worshipping God. You don’t have to say anything about life, but everyone knows why you are there.

TCAPP is growing across the country and there are other locations replicating what you started. Talk about your vision as this church is gaining attention and more people are learning about it.

Ken Peters: My vision is that the “bushel” is taken off the church. Jesus said, “You are the light of the world, a city on a hill.” Either keep your light under a bushel or “let your light shine before men that they might see your good works and glorify your Father in heaven.” My ultimate goal is to see revival and to see the church activate.

Why do you think the church has been largely silent on abortion?

Ken Peters: I think it’s become a political issue. Churches want to reach everyone. But they’ve stayed away from issues that might chase people away, instead of realizing that Christ Himself is the Truth and we don’t need to be afraid of the Truth. I think we can speak truth boldly and not hatefully. www.charismanews.com/culture/80140-pastor-starts-church-on-steps-of-planned-parenthood

Wow. Now that’s what I am talking about. That is biblical Christianity at its best. Let me conclude with two other radical Christians who shook up their world for Jesus. I refer to William and Catherine Booth, founders of the Salvation Army.

William famously said this: “The chief danger that confronts the coming century will be religion without the Holy Ghost, Christianity without Christ, forgiveness without repentance, salvation without regeneration, politics without God, heaven without hell.”

And let me offer just a few quotes from Catherine from her book Aggressive Christianity. She said this about why we have so many weak and unstable believers:

“Here is the reason why we have such a host of stillborn, sinewless, ricketty, powerless spiritual children. They are born of half-dead parents, a sort of sentimental religion which does not take hold of the soul, which has no depth of earth, no grasp, no power in it, and the result is a sickly crop of sentimental converts. Oh! the Lord give us a real, robust, living, hardy, Christianity, full of zeal and faith, which shall bring into the kingdom of God lively, well-developed children, full of life and energy, instead of these poor sentimental ghosts that are hopping around us.”

And here are a few more quotes:

“If we are to better the future we must disturb the present.”

“Opposition! It is a bad sign for the Christianity of this day that it provokes so little opposition. If there were no other evidence of it being wrong, I should know it from that. When the Church and the world can jog along comfortably together, you may be sure there is something wrong. The world has not altered. Its spirit is exactly the same as it ever was, and if Christians were equally faithful and devoted to the Lord, and separated from the world, living so that their lives were a reproof to all ungodliness, the world would hate them as much as it ever did. It is the Church that has altered, not the world.”

“Faithful witnesses must speak out, not mince the matter – not ‘mumble,’ as they say in court. The judge makes the witness speak up so that everybody may hear him. He must be heard. Speak out – why should not the Lord’s witnesses speak out? I wonder when we shall be done with this sneaking, hole-and-corner, shame-faced religion. I wonder when Christian England will cease to be ashamed of its God!! The only nation under Heaven ashamed of its religion and its God is the one that has got the true God to worship and to love. What an anomaly! Speak out!”

“This was the kind of witnessing the martyrs did. I often wonder whether there would be any martyrs now. Sometimes I think that the greatest boon to the Church of Christ would be a time of persecution. I believe it would. I believe it would drive us up to God and each other. We should find out, then, whether we were willing to forsake all to follow Him. You know that if the martyrs had taken the standard of religious life that exists now, they would never have been martyrs. They would have looked after their own skins, and left the Lord to look after the Gospel.”

“Real Christianity is, in its very nature and essence, aggressive.”

“What can we do without the Spirit? This is the reason of the effeteness of so much professed Christianity – there is no Holy Ghost in it. It is rotten. It is like a very pretty corpse.”

Hey, I am with Catherine Booth. I am with Ken Peters. Are you?