The Royal Family in times of crisis gives us a very faint picture of the Easter message:

With Easter once again upon us, it is worth reflecting on a few matters in this time of crisis, and look at another crisis of not all that long ago. And let me tie in a television address just made by the Queen concerning the corona crisis – a quite rare event, aside from her annual Christmas messages.

Queen Elizabeth II began her four-minute speech with these words: “I am speaking to you at what I know is an increasingly challenging time. A time of disruption in the life of our country: a disruption that has brought grief to some, financial difficulties to many, and enormous changes to the daily lives of us all.” Here is the second half of her speech: 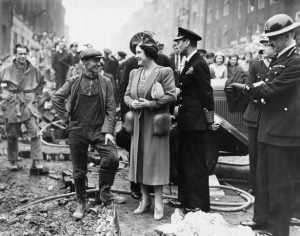 Across the Commonwealth and around the world, we have seen heart-warming stories of people coming together to help others, be it through delivering food parcels and medicines, checking on neighbours, or converting businesses to help the relief effort.

And though self-isolating may at times be hard, many people of all faiths, and of none, are discovering that it presents an opportunity to slow down, pause and reflect, in prayer or meditation. It reminds me of the very first broadcast I made, in 1940, helped by my sister.

We, as children, spoke from here at Windsor to children who had been evacuated from their homes and sent away for their own safety. Today, once again, many will feel a painful sense of separation from their loved ones. But now, as then, we know, deep down, that it is the right thing to do.

While we have faced challenges before, this one is different. This time we join with all nations across the globe in a common endeavour, using the great advances of science and our instinctive compassion to heal. We will succeed – and that success will belong to every one of us.

And you can watch her delivering the speech here: www.youtube.com/watch?v=2klmuggOElE

I am reminded of what her own mother and father did in another major crisis: the Second World War. Her parents were urged to leave the country during these turbulent times – especially during the Blitz – and find safe haven elsewhere. But they chose to remain behind and encourage the people.

The Blitz was a period from September 1940 to May 1941 in which the Germans unleashed a strategic bombing campaign against England. London and other cities were targeted, with both populated and industrial areas being bombed. During this nine-month period some 44,000 civilians were killed.

One article gives us a bit more detail of these very dark days:

The Blitz began on 7 September, ‘Black Saturday’, when German bombers attacked London, leaving 430 dead and 1,600 injured. London was then bombed for 57 consecutive nights, and often during daytime too. London experienced regular attacks and on 10-11 May 1941 was hit by its biggest raid. German bombers dropped 711 tons of high explosive and 2,393 incendiaries. 1,436 civilians were killed. However, this proved to be the last major raid until January 1943.

While London was bombed more heavily and more often than anywhere else in Britain, the Blitz was an attack on the whole country. Very few areas were left untouched by air raids. In relatively small compact cities, the impact of a severe air raid could be devastating. www.iwm.org.uk/history/the-blitz-around-britain

While the Blitz may have been somewhat short-lived, the War of course dragged on much longer. Another article speaks of how the Royal Family was involved in the nation during this period:

At 6pm on 3 September 1939, King George VI spoke to the people of Britain and the Empire. In his radio broadcast, he talked of the difficult times ahead and urged his people to stand firm. The King held the ranks of Admiral of the Fleet, Field Marshal and Marshal of the Royal Air Force (RAF). He and Queen Elizabeth inspected troops and visited work places. On these occasions the King always appeared in uniform.

During the Blitz, the King and Queen visited bombed areas to see the damage caused by enemy air raids. On these visits, the Queen took a keen interest in what was being done to help people who had lost their homes. After Buckingham Palace was bombed on 13 September 1940, she said she felt she could ‘look the East End in the face’.

Princesses Elizabeth and Margaret spent most of the war years at Windsor Castle and, like many other British children, were often apart from their parents. In October 1940, 14-year-old Princess Elizabeth broadcast a message to evacuees on the radio programme Children’s Hour, urging them to have courage.

At the age of 19, Princess Elizabeth joined the Auxiliary Territorial Service (ATS). After joining, she trained as a driver and mechanic with the rank of Second Subaltern. Five months later she was promoted to Junior Commander, which was the equivalent of Captain. Her younger sister Princess Margaret was a Girl Guide and later joined the Sea Rangers.

At 6pm on VE Day, 8 May 1945, the King again broadcast to the nation. During the afternoon and evening, the King and Royal Family made eight appearances on the balcony of Buckingham Palace to acknowledge the crowds gathered below. The princesses were allowed to leave the palace and secretly take part in the celebrations. www.iwm.org.uk/history/what-the-royal-family-did-during-the-second-world-war

The fact that the English monarchs would not abandon their people and flee overseas during a time of great crisis speaks volumes about their character and their love for the English people. They would remain there and live and work in solidarity with them.

And we have another even greater example of this in history. Jesus Christ, the Second Person of the Trinity, left the comforts of heaven to go to be with the people in their time of crisis. He could have stayed at home – and he had every right to do so.

But out of a deep, deep love for those whom he created and sought to redeem, he went to our sin-infested world and suffered on our behalf, eventually dying a cruel death on the cross. Like the Royal Family, he could have remained aloof, in a safe space, and not exposed himself to the dangers and terrors of the people.

But also like the Royals, he chose to be with them in their time of need. He knew he had to be there. Of course the King and Queen could only offer moral support by their presence during WWII. But Jesus came to planet earth to offer us much more than mere moral support and comfort.

He came to take our place at Calvary, dying as a substitute, taking upon himself the wrath of God for our sins. He did all this for us. There can be no greater identification with the people than this supreme act of self-sacrifice. This is the real meaning of Easter.

A few biblical passages make all this clear:

Even as the Son of Man came not to be served but to serve, and to give his life as a ransom for many. (Matthew 20:28)

Greater love has no one than this, that someone lay down his life for his friends. (John 15:13)

In this the love of God was made manifest among us, that God sent his only Son into the world, so that we might live through him. In this is love, not that we have loved God but that he loved us and sent his Son to be the propitiation for our sins. (1 John 4 9-10)

Glory to God and Happy Easter!

11 Replies to “The Queen, Crises, and Christ”