Is corona moving us in the direction of a police state?

This is my 25th article on the corona crisis. I have said repeatedly now that we have two crises here: the health crisis, and a political/economic crisis. In most of my articles I have been warning about overreactions by the state during this time, and of the cure ending up being much worse than the disease. As I said in a recent piece: 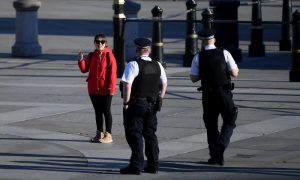 Most of the above measures have already occurred here in Australia, many in Victoria. And if this most recent case of idiocy in Dictator Dan’s Police State does not tick you off (along with all the other draconian measures) I don’t know what will:

A 17-year-old learner driver was left “shocked” after being fined $1600 for driving with her mum during the COVID-19 lockdown. Sharee Reynolds was supervising her daughter, Hunter, as she drove from their Hampton home to Frankston at the weekend when the pair were pulled over by police and fined for non-essential travel.

“We didn’t think for one minute that we would be doing anything wrong. We weren’t in contact with any person, we weren’t stopping anywhere,” Sharee told 3AW’s Neil Mitchell. “She [the police officer] said we were too far from home and we would cop a fine, and that Hunter would be the person to receive that fine.”

When the mother and daughter questioned the fine, Sharee said the police officer told her police were “smashing it on the roads today”. Hunter said she was surprised by the incident. “I was just shocked, because I obviously hadn’t done anything wrong, or so I thought. I was just really stressing,” the teenager said. www.3aw.com.au/teenage-learner-driver-slapped-with-1600-fine-for-driving-with-her-mum-during-covid-19-lockdown/

As the Austrian-English libertarian philosopher and economist F. A. Hayek rightly noted last century: “‘Emergencies’ have always been the pretext on which the safeguards of individual liberty have been eroded.” We are seeing this happening throughout the West.

Vodafone has provided the mobile phone location data of several million Australians in an anonymised and aggregated form to the federal and NSW governments to monitor whether people are following social distancing restrictions amid the coronavirus pandemic. To date, governments, medical experts and the media have used location data from transport apps such as CityMapper, which shows how people move throughout cities like Sydney and Melbourne using public transport, in an attempt to determine whether people’s movement has reduced. www.smh.com.au/technology/mobile-phone-location-data-used-to-track-australians-movements-during-coronavirus-crisis-20200404-p54h09.html

This has many folks concerned:

Technologies used to enforce social distancing and to monitor and curb the spread of the coronavirus need a sunset clause, or they could linger as an intrusive tool of the state, civil libertarians and privacy experts say. During a natural disaster or war, emergency measures taken by the government usually include a reasonably clear end date when the powers are no longer needed, Julian Sanchez, a senior fellow at the Cato Institute, told the Washington Examiner. Coronavirus, much like terrorism, has the potential to spread and resurface, he said. A point of danger is when the persistent threat of resurgence justifies emergency measures as a prophylactic “just in case” measure. “You don’t have quite as bright a line with something like coronavirus, which has the potential to become a cyclical problem.”
www.washingtonexaminer.com/news/civil-libertarians-fear-use-of-drones-during-pandemic-will-remain-part-of-surveillance-state

And as I have so often warned, loss of life due to economic collapse is just as serious as actual corona-related deaths: “Knox County, Tennessee saw nine deaths by suicide within 48 hours this week as doomsday predictions over the novel Wuhan coronavirus panics an already anxious public and leaves millions unemployed and isolated.” thefederalist.com/2020/03/27/more-people-died-from-suicide-than-coronavirus-in-tennessee-this-week/

And Americans are also being busted by the police for simply driving safely in their own cars:

Pennsylvania State Police cited 19-year-old Anita Lynn Shaffer for violating a stay-at-home for York County after police say she went a leisurely drive on March 29. Shaffer is the only person in the Commonwealth to be cited under the state’s disease control and prevention act of 1955, spokesman Ryan Tarkowski said on Friday. Troopers have issued two warnings in other areas of the state. . . . The citation will cost Shaffer more than $200. www.usatoday.com/story/news/nation/2020/04/03/coronavirus-stay-home-order-pa-woman-cited-after-going-drive/2942950001/

Commentator Steve McCann says this about the American situation:

When societies lose their freedom, it is not ordinarily because autocrats or tyrants have forcibly taken it away. It is usually the result of the population willingly surrendering their freedom in return for protection against an external threat. While the threat is oftentimes real, it is invariably exaggerated.

This is what we in the United States are experiencing. The general public has been stampeded by the fearmongering in the media into demanding action from the politicians at both the state and federal level. The politicians respond and do not pause to ask whether these actions will work — just do something! They do not ask if the financial and societal cost to the nation is worth the unknown and perhaps nebulous return.

Any student of history and human nature would recognize that these are the classic symptoms of collective hysteria. Hysteria is contagious. This nation is turning itself inside out as we, thanks to the media, are exaggerating the threat and not stopping to ask if the cure is worse than the disease.

In its 244-year history the United States has weathered seven of the worst pandemics in world history without the hysteria and loss of liberty and freedom. All indications reveal that the Coronavirus will be exponentially less life-threatening than any of these previous pandemics.

Is the Coronavirus pandemic serious enough to warrant putting much of the nation’s population into house imprisonment, or wrecking the economy for an indefinite period of time, or prohibiting worshipers from attending their churches, synagogues or mosques, or outlawing freedom of assembly and travel, or destroying businesses that have taken years to build up, or saddling future generations with unfathomable debt? The nation is choosing to plunge millions of people into depression, heart attacks, suicide and unbelievable distress, though they are not especially vulnerable and will only suffer mild symptoms or none at all.

This is what a police state is like. It is a nation in which the government can issue orders and edicts or convey preferences with no legal authority. Yet, it appears the majority of the American people are willing to sacrifice their freedoms and way of life in order to empower such a potential police state in the guise of conquering a pandemic. Governments never give up power once attained. They only seek to normalize it and now they have in their toolbox the knowledge that the citizenry will meekly acquiesce to any national emergency being declared an existential crisis which requires government to unconstitutionally impose its will on the people. www.americanthinker.com/articles/2020/04/how_a_police_state_is_born.html

There is at least one American law enforcement officer who seems to get it:

Maine’s Franklin County Sheriff Scott Nichols has a strong message for the Governor of Maine, Janet Mills, who issued “stay-at-home” orders with threats of police punishment if not followed. Sheriff Nichols issued a statement on the Franklin County Facebook page saying in no uncertain terms he will not follow the unconstitutional order.

“We will not be setting up a Police State. PERIOD,” he wrote. “The Sheriff’s Office will not purposefully go out and stop vehicles because they are on the road or stop and ask why people are out and about. To do so puts our officers at risk. This is not Nazi Germany or Soviet Russia where you are asked for your papers!” The sheriff’s announcement comes as a welcome sign to Americans who have been arrested for inane things like praying outside, surfing, or trying to drive to work. pjmedia.com/trending/rebellion-this-is-not-nazi-germany-or-soviet-russia-where-you-are-asked-for-your-papers-says-maine-sheriff/

Let me finish by pointing out something that has occupied my mind of late. When this crisis passes, Australia may – at current rates – have had well under 10,000 cases of the virus, and perhaps 100 deaths. Time will tell. But if this is more or less how things will pan out, there will be at least two views on this:

The truth may never be fully known, but might lie somewhere between the two. However, as we seek to be wise about proper health and safety measures, we also need to be wise – very wise – about Statism and Big Brother in action.

13 Replies to “Police States and the Corona Clampdown”