Just as shocking as the rise in Statism is the fact that so many sheeple are readily embracing it:

There is only one thing that worries me more than the reckless and inexcusable abuse of power as Big Brother statism is on the rise with this corona crisis. And that is all those clueless sheeple who fully stand by and acquiesce to everything these power-hungry states are up to.

That is what has frightened me the most. Some of these people have become so subservient to the state and whatever it does and says, that they will actually lash out at anyone who says we need to be able to question our leaders, hold them to account, and not buy everything they are up to. 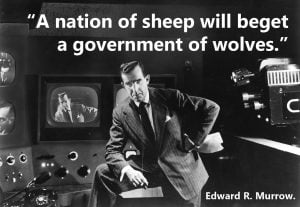 A very good example of this just took place. I posted something that I was certain I could get 100 percent agreement on. It did not occur to me that anyone would beg to differ. I thought this was an obvious open misere case, and no one would demur.

Yes, hundreds ended up fully agreeing with me, but a few folks actually took real umbrage. I refer to the story I ran with yesterday about a teenager and mother fined $1600 for doing a driving lesson in the People’s Republik of Victoria: billmuehlenberg.com/2020/04/06/police-states-and-the-corona-clampdown/

Even more frightening was the fact that some of these folks claimed to be Christians. Yet they seem to be in full-blown statism mode, assuming that the government is always right, that we should ask no questions, and that we just go along like sheep with whatever they say.

That is always a recipe for disaster. The Bible nowhere tells us to put the state on a pedestal and fully live in subservience to it. Yes, the state is God’s idea, but it is always to be under God’s authority, and never to be a law unto itself. As I had to say to one such person:

Romans 13 is not about blind submission. The state is delegated authority and we obey it as it aligns itself with God and his laws. There is always a place for civil disobedience and conscientious objection. The idea that we never question the state is nowhere found in Scripture. Indeed, your unquestioning support of our leaders and naïve belief that they can do no wrong is a real worry. It was the many German “Christians” with their unbiblical slavish obedience to the state and their ‘my country right or wrong’ approach that of course paved the way for the easy rise of the Nazis. No biblical Christian can be an anarchist. But neither can one blindly be subservient to the state and refuse to call it out when it is needed. If we are not allowed to ask honest questions and hold our leaders to account, then the game is already over.

Indeed, the real worry about some of these folks is that they seem to have no clue. This is just how tyranny begins, with naïve folks having no clue about history and no concern about freedom. They think that all governments and rulers have only the best of intentions and only want our very best. Tell ‘em they are dreaming.

They are the ones recklessly welcoming in the police state with open arms. We have seen it all before. We had plenty of folks do just the same in Germany in the 1930s. They were so happy to go along with whatever their rulers told them. They questioned nothing and accepted everything.

Some years ago I wrote a piece on how so many Germans could have allowed the Nazi rise to power. I said this in part:

One thing worth mentioning is how gullible and easily deceived we are. We are so prone to believe lies, and our leaders are so prone to tell us lies. One little book has recently appeared making this case, tying it directly in to the Nazi horror. I refer to Andy Andrews’ How Do You Kill 11 Million People? (Thomas Nelson, 2011).

In it he notes how easily the Germans fell for all the lies. Hitler had said, “How fortunate for leaders that men do not think. Make the lie big, make it simple, keep saying it, and eventually they will believe it.” And he points out that less than 10 per cent of the population actually worked or actively were involved with Hitler. The other 90 per cent basically just sat back and allowed it all to happen. billmuehlenberg.com/2012/11/12/the-church-and-nazi-germany-revisited/

More recently Chuck Baldwin penned an article on this. He begins:

As a small boy, I heard those discussions from my parents and their friends, who were part of “The Greatest Generation.” I heard it from my friends in college. And I heard it all of my adult life in churches, coffee shops and conference rooms all over America: “How could Germany let it happen?” And, “Thank God, it could never happen in America.”

Well, it IS happening in America—and all over the world at the same time. Due to their complete collapse into a state of fear and panic, most Americans seem oblivious to the fact that we are right now—RIGHT THIS VERY MINUTE—living in what could easily be the last days of freedom.

It happened in less than 30 days—and it is happening due to mass hyperbole and media manipulation. No, I’m not saying that the coronavirus is not real. Neither am I saying that people have not died from the virus. But I am saying that the fearmongering over the claim that corona has the potential to be a global pandemic akin to the Black Death is pure, unadulterated poppycock. www.stridentconservative.com/now-we-know-how-germany-let-it-happen/

Now am I saying that all these clueless wonders who think we should just do everything the state tells us to do are closet Nazi-supporters? No. But they certainly are clueless nonetheless. They seem to know nothing about history and they seem to care little for how precious freedom is.

The norm for most of human history is tyranny, oppression and enslavement. Democracy and freedom are the exceptions to the rule. But we now seem so ready to throw it all away. Yes we must be cautious and the state has a role to play. But real vigilance is needed here.

Another critic told me to stop being “bitchy” about these clampdowns, that all countries are doing it, and that I should just trust that God is in control. I replied:

Having legitimate and proper concerns about runaway statism is not being bitchy. It is being wise and prudent. And no, not all states around the world are doing the same. Many are far, far less restrictive yet still coping well. And of course God is in control, but that does not absolve us of being fully responsible – responsible in our own sensible health protection measures, and responsible in not allowing democracy to fade and tyranny arise.

Let me conclude with a few words from Matt Walsh:

Apologists for our newly established police state will tell me that states and localities have the authority to impose restrictions in an emergency. That is true, but the question of how far their authority actually goes is complicated, and in this case made even more complicated by the fact that these stay-at-home orders, in many cases, are based not on a current medical emergency in the respective state, but on models that forecast the possibility of an emergency in the future. For example, Minnesota is under a stay-at-home order despite having only 29 coronavirus deaths among a population of over 5 million. Perhaps the situation will get worse. Perhaps not. The point is that there is no current emergency in Minnesota or many of the other states currently under lockdown. There is, rather, a model that projects an emergency. And if projected emergencies can justify the effective nullification of the Bill of Rights, where is the limit? Haven’t we now granted the government the power to seize near-total control on the basis of any real or phantom threat?

And there are other problems. We don’t know that these lockdowns will actually have the effect of saving lives. It’s possible, as Dr. Fauci has admitted himself, that the virus could come roaring back to life whenever we emerge from our homes. It’s also possible that the illness came to America in November, December, or January, aboard any of the hundreds of thousands of travelers from China who poured into our country during that span. If that’s the case, then the viral horse has long since left the barn, and the lockdowns are obliterating our national economy and driving millions into ruin for minimal preventative gain. So we have, then, a series of indefinite stay-at-home orders based on dubious models, and dubious projections, with a dubious chance of success, and which often outlaw behavior that could not even plausibly put anyone at risk from the disease that may or may not, or maybe already has, become epidemic in the states where these laws have been enacted. Is that good enough to justify treating Americans like subjects in a communist dictatorship? …

I’m not suggesting that state governments should do nothing in response to the coronavirus. I am suggesting that they shouldn’t have the power to do whatever the hell they want, for whatever reason they want, to whatever extent they want, for however long they want, with whatever penalty they want. Which is what is happening now all across the country. Governments can and should act justly and prudently to respond to threats that endanger their citizens’ lives. But there is little in the way of justice and prudence in these measures. www.dailywire.com/news/walsh-we-have-become-a-police-state-and-none-of-us-should-be-okay-with-that

I must agree. People who care little or nothing about freedom probably don’t deserve it. That sure seems to be one clear lesson we are learning from the corona crisis.

15 Replies to “Sheep in an Age of Big Brother”