A few quick words on the Pell decision:

The High Court of Australia has just handed down its decision concerning Cardinal George Pell and charges of child sexual abuse. In a unanimous 7-0 decision, it has quashed his conviction. Thus his 404 days in prison have just come to an end.

Millions of words have already been penned on this case, and millions will be in the days ahead. So I have very little of anything new or unique to add here. Let me just present part of one news account on this decision, and then make a few brief points. 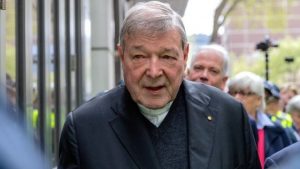 Cardinal George Pell has won his High Court appeal in a unanimous decision with his conviction overturned and is expected to be released from Barwon Prison near Geelong in Victoria shortly. The High Court’s Chief Justice Susan Kiefel handed down the full bench’s ruling to an almost empty High Court registry in Brisbane where she resides at 10am on Tuesday. The court ruled there is a significant possibility that an innocent person had been convicted because the evidence did not establish guilt to the requisite standard of proof.

“The High Court found that the jury, acting rationally on the whole of the evidence, ought to have entertained a doubt as to the applicant’s guilt with respect to each of the offences for which he was convicted, and ordered that the convictions be quashed and that verdicts of acquittal be entered in their place,” the summary of the decision said. The other six justices remained at home while the decision was tweeted and the full decision of 26 pages has now been published online. www.afr.com/work-and-careers/leaders/george-pell-wins-appeal-20200406-p54ho2

Here is the decision for those who want to read it in full: www.hcourt.gov.au/assets/publications/judgment-summaries/2020/hca-12-2020-04-07.pdf

Here then are a number of brief, bullet point matters that I wish to raise:

-I have actually met Pell a few times and I may even have shared platforms with him over the years. I have always found him to be a kind, gracious and caring man.

-I have long questioned the charges made against him, as did so many others.

-Conservatives like Andrew Bolt (an agnostic) have long fought on his behalf. He and many others felt that this was a witch hunt and a major travesty of justice.

-The ABC is especially spitting chips right now – they have been at the forefront of seeking to have Pell locked up at all costs, along with so many other Christophobic and leftist outlets.

-This really was a case of a left-wing lynch mob in action.

-The reason why the left hates Pell so much is not just because he is Catholic, but because he has been a solid conservative in all areas – politics, culture wars, marriage and family, and even on the dangers of Islam.

-No, I am not a closet Catholic, nor am I a fan of the current pope – he is appalling, as so many devout Catholics fully believe. But this is not a sectarian issue: it is an issue of justice.

-Folks should not allow sectarian bigotry to colour their views. Today’s decision makes it clear that the case against Pell was very weak indeed and it had to be thrown out.

-Some people simply hate Pell and hate all things Catholic, so no amount of evidence will convince them of his innocence. This was a unanimous decision, yet some folks still want to ignore the evidence and keep lashing out: ‘I still think he is guilty.’ Heaven help us if we just go on our own biases and bigotries instead of on the facts of the case.

-I am not saying every court case gets it right – often they can get it wrong. But the evidence against Pell was always very shaky, and this unanimous decision would seem to strongly vindicate Pell.

-Those who simply want to keep hating on Pell and Catholicism are advised to take it elsewhere thanks. I will NOT be printing any of their sectarian comments here.

-Finally, with this unanimous 7-0 ruling going Pell’s way, we can now hope for something similar for Dr Jereth Kok, who has also undergone his own travesty of justice. You can see his story here: billmuehlenberg.com/2020/03/30/the-big-brother-purge-of-conservative-christians-in-australia/

Please pray for George Pell. It has been quite an ordeal he has gone through for the past few years. Although now out of prison, as a 78-year-old, he will still be in lockdown because of corona – but this will be a much better way for him to remain isolated.

And pray for all genuine victims of child sexual abuse, and that all real perpetrators of this are caught and dealt with justly.

57 Replies to “The Pell Decision”