Far too many folks are giving the State a blank cheque to do anything in a time of crisis:

One sign of a decaying society is the inability to think straight, to question, and to ask hard questions. This is especially true when a docile and uninformed populace simply goes along with everything the ruling powers tell them. When we have widescale blind subservience to the state, then you know we are in big trouble. The current corona crisis is bringing this out quite clearly.

I have heard so many folks defending to the death every single draconian measure governments have taken in their response to corona. Some of the most ludicrous, idiotic and over-the-top steps have been defended. “Well the government knows what’s best, so we dare not question them.” We have seen this “my country right or wrong” attitude in action before. It did not end up very well in Germany in the 1930s. 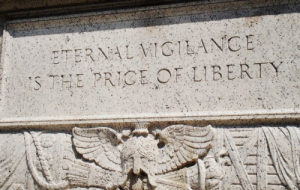 No, I am not saying Western governments today are Hitlerian, but I am saying that this is how most tyrannies have come about: the erosion of liberties to deal with real or perceived emergencies. Yes, sensible health measures are required, but so too is eternal vigilance against out-of-control statism.

Indeed, I have penned 27 articles now on corona, and in most of them I have said that there of course needs to be a balance between measures to help protect public health and safety, and not allowing Big Brother to get carried away and overreact.

The examples of this are now quite numerous. One well-known case in point was the story of the ludicrous $1700 fine given to a teen learner driver. I would have thought that no one would consider that to in any way imperil the health of others, but just a case of idiotic government overreaction.

Yet way too many folks have defended that and other extreme measures. And they all keep coming back with the same lame line: ‘Well, the government knows what is best for us. They have our best interests at heart. We should not question anything that they are doing, but just let them get on with the job.’

Wow, scary stuff. Thankfully I am not the only one who is concerned about all this. There have been many other brave voices who have sought to sound the alarm and warn us that the cure may well become a whole lot worse than the disease. One of these courageous watchmen on the wall is Dr. Augusto Zimmermann, a Perth-based law professor.

He too has written plenty about these matters, and his voice certainly deserves to be heard. He has just published a brand-new piece on this entitled “Government by Virus and Executive Diktat.” The whole piece warrants a careful reading, but let me quote parts of it here. He begins as follows:

My state, Western Australia, has just recorded its fourth death attributed to the Wuhan virus — another elderly man, like so many other casualties, already inflicted with chronic illness when infected. Surely such an “enormous” death toll justifies dramatic measures to curtail fundamental rights, as well as the Morrison’s government spending $320 billion — 16.4 per cent of the nation’s gross domestic product — to combat the virus’ health and economic effects caused by the same measures imposed by the government itself.

Because these extreme measures are dictated by the executive and have no deadline to expire, we are effectively experiencing government by executive decree. This is something akin to the actions of deeply authoritarian regimes, in particular when such executive measures are not properly scrutinised.

The limitation of powers designed by the drafters of the Constitution is commonly traced to the work of the French philosopher and political theorist, Charles-Louis de Secondat, Baron de La Brède et de Montesquieu. First published in 1748, Montesquieu’s The Spirit of the Laws, received widespread public acclamation. Its first English translation, in 1750, became so popular that those who supported the ratification of the American Constitution, as well as those who argued against it, relied heavily on Montesquieu to justify their positions.

Inspired by the American model, the Australian Constitution establishes a system of checks and balances and of division of powers. This is so, among other things, because Montesquieu reminded the Australian framers that “constant experience shows us that every man invested with power is apt to abuse it, and to carry his authority as far as it will go”. To prevent this, ‘it is necessary from the very nature of things that power should be a check to power”, he wrote.

He features some quotes by Montesquieu and then continues:

Historically, the ideal of legality known as ‘the rule of law’ presupposes the existence of law serving as an effective check on the executive power. The phrase is designed to minimise the executive power, so that our fundamental rights and freedoms may be adequately preserved. By forcing the executive branch to follow proper rules of law, the rule of law operates to reduce the possibility of government being able to excessively coerce, obstruct or otherwise unreasonably interfere with the life, liberty and property of the citizen. The tradition operates in terms of providing legal and institutional instruments to protect citizens against the arbitrary power of the state. As St Thomas Aquinas stated, “…once the government is established, this must be so arranged that opportunity to tyrannize be removed. At the same time, the power of government should be so tempered that it cannot easily fall into political tyranny.”

He finishes his piece this way:

The Australian government and the state governments appear to be effectively ruling by executive decree. These extraordinary controls on our freedoms have no constitutional validity because they are certainly not powers intended to be exercised in its present form. Above all, Australians would be wise to pay more consideration to these wise words of Thomas Jefferson, the main drafter of the American Declaration of Independence: “A government big enough to give you everything you want, is strong enough to take everything you have”.

As for myself, I am deeply afraid to conclude that this country is now effectively governed by a less open or more disguised form of elected dictatorship (executive dominance) – consisting of executive rule by decree and with no proper public scrutiny available.

Of course, a democratic-constitutional framework depends not just on the character of public authorities, but also on the willingness of the people to fight for their rights and freedoms. As it has been more properly said, indeed, “the price of liberty is eternal vigilance”.

It is truly disturbing to observe how a considerable number of Australians willingly surrendered their constitutional rights and freedoms in the name of more government security and protection. Such carelessness may eventually prove lethal not only to the long-term preservation of democratic government but also to the preservation of their basic rights to life, liberty and property. quadrant.org.au/opinion/qed/2020/04/government-by-virus-and-executive-diktat/

As I have said repeatedly now, there IS a place for some sensible government intervention in times of national and international emergency. No one is saying there should not be. But great care is needed to ensure that runaway statism does not result – even with the best of intentions.

I have already quoted the Austrian-English economist and philosopher F. A. Hayek before, but his remarks are worth repeating here “‘Emergencies’ have always been the pretext on which the safeguards of individual liberty have been eroded.”

A few other quotes are worth offering. Thomas Jefferson’s warning must be carefully considered: “The natural progress of things is for liberty to yield and government to gain ground.” And George Washington reminded us of this truth: “Government is not reason; it is not eloquent; it is force. Like fire, it is a dangerous servant and a fearful master.”

And beware of good intentions. H L Menken put it this way: “The urge to save humanity is almost always a false-front for the urge to rule it.” And Milton Friedman once said this: “Concentrated power is not rendered harmless by the good intentions of those who create it.” Or as C. S. Lewis rightly stated:

“Of all tyrannies, a tyranny sincerely exercised for the good of its victims may be the most oppressive. It would be better to live under robber barons than under omnipotent moral busybodies. The robber baron’s cruelty may sometimes sleep, his cupidity may at some point be satiated; but those who torment us for our own good will torment us without end for they do so with the approval of their own conscience.”

13 Replies to “We Really Like Big Brother – and Distrust Freedom”