The growing list of statist horror stories should have us all very concerned:

It seems that I must now start a daily list of corona horror stories – not of the disease itself and its impact, but of government overreactions and Big Brother madness. And once again I must state – for the 87 kazillionth time now – that yes, there is a place for sensible and measured government intervention during times of national emergency. But if the cure becomes worse than the disease, then we must call it out. 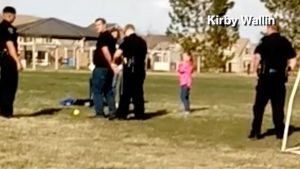 I am not one of those many servile sheeple who are giving governments blank cheques here, arguing that whatever they do must be right. Sorry, my job as a responsible citizen is to ask hard questions and to hold my leaders to account. Sometimes they will get things right, but sometimes they won’t, and none of us should just allow the state to do whatever it wants.

If these examples were all just one-offs, or the exception to the rule, that might be one thing. But these sorts of stories are now becoming the norm, and plenty more examples could be mentioned here. This really is getting to be a real worry. So let me share some more horror stories, first from Australia and then from overseas, with the headline, date, opening paragraph(s), and source of each.

Six months in jail, $11,000 fine for leaving home without a ‘reasonable excuse’
March 31
Anyone in NSW who leaves their house without a “reasonable excuse” could spend up to six months in prison and face an $11,000 fine under an emergency ministerial directive gazetted overnight. The public health order, which enacts Sunday’s recommendations of the national cabinet, gives police sweeping power to enforce the latest round of restrictions designed to limit the spread of coronavirus in Australia.
www.smh.com.au/national/nsw/six-months-in-jail-11-000-fine-for-leaving-home-without-a-reasonable-excuse-20200330-p54fg8.html

Victoria Police fine group of friends playing cricket for breaching social distancing rules
April 8
A group of mates have played probably their most expensive game of cricket after Victoria Police fined each of them for breaching the state’s social distancing rules. Video footage shows the officers writing up the group of five for “having a game of backyard cricket”.
www.news.com.au/national/victoria/news/victoria-police-fine-group-of-friends-playing-cricket-for-breaching-social-distancing-rules/news-story/4d7431ad9b4ed652ca3c515defb77450

Police hotline swamped with COVID-19 calls as Victorians dob in neighbours
April 8
More than 600 calls a day are flooding into the state’s crime reporting hotline, as Victorians rush to dob in neighbours who flout COVID-19 social-distancing rules. Victoria Police has seen calls to the relatively new police assistance line spike by 50 per cent in recent weeks, with people increasingly phoning to report mass gatherings and isolation breaches.
www.theage.com.au/national/victoria/police-hotline-swamped-with-covid-19-calls-as-victorians-dob-in-neighbours-20200408-p54i5g.html

Extra 1.4 million Australians out of work in wake of COVID-19 pandemic – 3.92 million (27.4% of workforce) now unemployed or under-employed
April 8
The COVID-19 Coronavirus pandemic hit the Australian economy hard in mid-March when Australia’s Federal, State and Territory Governments began introducing restrictive social distancing and self-isolation rules to stop the spread of the infectious virus. The early signs on the new restrictions are good from a public health perspective as the rate of new cases has substantially reduced ever since restrictions began to be introduced in mid-March. However, the restrictions have also had a huge impact on the employment situation of many Australians – particularly in customer focused industries such as hospitality and retail businesses that have largely shut-down.
www.roymorgan.com/findings/8363-roy-morgan-unemployment-and-under-employment-march-2020-202004080900

Finally, and to put all this in perspective, while Australia is shutting down churches and so many other services and businesses, abortion mills are still freely operating. Australia has 25 million people, yet so far it has 51 corona deaths. Every 5 hours that many people are killed by abortion. Let that sink in.

And consider these shocking stories of Statism run amok in America:

Coronavirus stay-at-home order in California has police giving citations to people watching sunset at beach
April 6
Nearly two dozen people were issued citations at a beach on Friday for violating California’s stay-at-home order meant to slow the spread of coronavirus in the state, according to officials. The San Diego County Sheriff’s Office said Saturday the tickets were issued to 22 people who were “watching the sunset, having picnics near the beach” in Encinitas, located 25 miles north of San Diego.
www.foxnews.com/us/coronavirus-stay-at-home-order-california-police-sunset-beach-encinitas.amp

Louisville Mayor Forbids Churches From Holding Easter Sunday Drive-In Services
April 8
The mayor of Louisville, Kentucky says churches will not be allowed to hold drive-in services on Easter Sunday. Mayor Greg Fischer, a Democrat, said he made his decision with a “heavy heart.”
www.toddstarnes.com/faith/louisville-mayor-forbids-churches-from-holding-easter-sunday-drive-in-services/

Colorado father, 33, is handcuffed in front of his six-year-old daughter for breaking social distancing guidelines by playing tee-ball with his wife and kid in an empty park
April 8
A Colorado father feels local law enforcement owe him an apology after they handcuffed him in front of his wife and daughter because they claimed he violated social distancing rules by playing tee-ball.
www.dailymail.co.uk/news/article-8196337/Colorado-man-handcuffed-playing-tee-ball-wife-kid-park.html

And if you think none of this is a big deal, and these folks were all wrong in doing these things, let me draw upon one writer who has said some very worrying things about the situation in the US. She begins:

Do you remember the bill of rights? There are ten rights promised to Americans within it. Since the Chinese WuFlu pandemic hit, Americans have lost half of them and anyone who has studied human history knows the “temporary” loss of human rights is rarely temporary. Here’s a comprehensive list, for those of you keeping track of the recent assaults on civil rights.

She examines the five, and then concludes:

Currently, your government has made the decision that it’s going to be you and your liberties that must suffer for the possibility that they can save some people who are sick with a virus that most people recover from. There is no plan in place to save those of you who become sick from worry, depression, poverty, and the chaos the government and the experts have created.
pjmedia.com/news-and-politics/5-civil-rights-americans-lost-to-the-covid-19-panic/

Yes, some folks might quibble about some of these cases as to whether they were over the top or not. But the point is not if one or two cases are justified or not. It is the accumulation of far too many of these sorts of cases that is becoming a very real concern.

And of course I must once again repeat: Yes, some temporary measures and some infringements on freedom may be needed in times of a national crisis. And I am not saying that every politician is a closet statist. But when as much harm can be done by stringent and questionable measures as the virus itself, then at the very least we all must remain vigilant and keep asking questions.

And if you are convinced that I and others are wrong for sounding the alarm and raising questions here, then you might be part of the problem.