The New York Governor needs to reconsider his anti-God rhetoric:

A recent arrogant outburst by an American political leader reminds me of the words of Jesus to another political leader. In John 19:10-11 we find this exchange between Pontius Pilate and Jesus: “Then Pilate said, ‘Do you not answer me? Do you not know that I have power to nail you to a cross, or to let you go free?’ Jesus said, ‘You would have no power over me if God did not give you power. So then, the man who gave me up to you has done something worse than you’.”

Jesus made it pretty clear to this mere human leader that all power ultimately derives from God, and any power that we might have is a gift from him, so we better exercise it wisely and humbly. But politicians and leaders for millennia have foolishly thought that they are the source of their own power and authority. 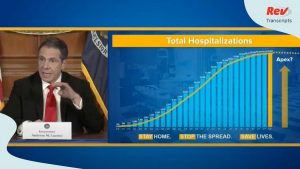 And we still have arrogant leaders who think they are the masters of their destiny, and accountable to no one. Consider a recent press conference given by New York Governor Andrew Cuomo on Easter Monday. In his 25-minute talk, followed by a 20-minute Q&A session, he said a number of things – some unremarkable, but a few quite extraordinary.

As to the lowering corona numbers in New York City he said this during the Q&A session (near the 38-minute mark):

But then he went on to say this:

The number is down, because we brought the number down. God did not do that. Faith did not do that. Destiny did not do that. A lot of pain and suffering did that. And that’s why we lost five pounds, because we went out every day and we exercise and we burned more calories than we ate. That’s how it works. It’s math. And if you don’t continue to do that, you’re going to see that number go back up. And that will be a tragedy if that number goes back up. www.rev.com/blog/transcripts/governor-andrew-cuomo-new-york-coronavirus-briefing-transcript-april-13

Hmm, in the midst of a deadly epidemic, I would not be throwing out such sacrilegious comments – certainly not on Easter Monday. A little humility on his part, and a little respect for all the New Yorkers – and Americans – who do believe in God would be in order here – not smart-aleck remarks.

Now more than ever we need to seek God and his help. Sure, we must do our part, but there is nothing amiss in prayer and faith in such times. But some folks are still happy to hate on God and to score cheap misotheist points. This is all the more remarkable given that early on in his news conference he said this:

Number of deaths is 671. Not as bad as it has been in the past, but basically flat. And basically flat at a horrific level of pain and grief and sorrow. This is 671 people who passed away on Easter Sunday. For me, I’m Catholic. Easter Sunday is the high Holy day in many ways. And one of the high Holy days, and to have this happen over this weekend is really, really especially tragic. And they are all in our thoughts and prayers.

Hmm, so much for his supposed faith. So much for his Catholicism. When you say God has nothing to do with help and relief in a time of crisis, you are a pretty lousy advertisement for any faith you might proclaim to have. Atheists are always happy to make such remarks – but why someone claiming to be religious?

And he is simply quite foolish and quite wrong in what he said anyway. No biblical Christian makes this false distinction: they know that God acts, and we are to act. It is not either-or, but both-and. In so many areas we have genuine cooperation going on. So with corona we take sensible measures in health and safety, and we also seek the help of God.

We must push both of these biblical truths -simultaneously. Needless to say, I have written often on this topic. See one such piece here: billmuehlenberg.com/2017/01/18/theology-gods-sovereignty/

Both truths are repeatedly stated in Scripture. And often in the very same verse we will find both things clearly stated. There are many hundreds of biblical texts we can appeal to here. Since I have just finished reading through 1 &2 Samuel again, let me just share some verses I found there which demonstrate this truth:

1 Samuel 2:25 His sons, however, did not listen to their father’s rebuke, for it was the Lord’s will to put them to death.

1 Samuel 10:6, 9 The Spirit of the Lord will come powerfully upon you, and you will prophesy with them; and you will be changed into a different person…. As Saul turned to leave Samuel, God changed Saul’s heart

1 Samuel 10:26 And Saul also went home to Gibeah; and there went with him a band of men, whose hearts God had touched.

1 Samuel 11:7 Then the terror of the Lord fell on the people, and they came out together as one.

1 Samuel 14:15 Then panic struck the whole army—those in the camp and field, and those in the outposts and raiding parties—and the ground shook. It was a panic sent by God.

1 Samuel 26:12 So David took the spear and water jug near Saul’s head, and they left. No one saw or knew about it, nor did anyone wake up. They were all sleeping, because the Lord had put them into a deep sleep.

1 Samuel 26:19 Now let my lord the king listen to his servant’s words. If the Lord has incited you against me, then may he accept an offering. If, however, people have done it, may they be cursed before the Lord!

2 Samuel 5:19-20 And David inquired of the Lord, “Shall I go up against the Philistines? Will you give them into my hand?” And the Lord said to David, “Go up, for I will certainly give the Philistines into your hand.” And David came to Baal-perazim, and David defeated them there.

2 Samuel 5:24-25 And when you hear the sound of marching in the tops of the balsam trees, then rouse yourself, for then the Lord has gone out before you to strike down the army of the Philistines.” And David did as the Lord commanded him, and struck down the Philistines from Geba to Gezer.

2 Samuel 15:31 Now David had been told, “Ahithophel is among the conspirators with Absalom.” So David prayed, “Lord, turn Ahithophel’s counsel into foolishness.”

2 Samuel 17:14 Absalom and all the men of Israel said, “The advice of Hushai the Arkite is better than that of Ahithophel.” For the Lord had determined to frustrate the good advice of Ahithophel in order to bring disaster on Absalom.

2 Samuel 24:1, 10 Again the anger of the Lord burned against Israel, and he incited David against them, saying, “Go and take a census of Israel and Judah.” … David was conscience-stricken after he had counted the fighting men, and he said to the Lord, “I have sinned greatly in what I have done. Now, Lord, I beg you, take away the guilt of your servant. I have done a very foolish thing.”

The Bible is full of such texts. And then we could mention all the passages which speak about God bringing upon a people – or taking away from a people – disease, plagues, pestilence, famine and so on. I list some of these verses here: billmuehlenberg.com/2015/09/13/on-mecca-and-natural-disasters/

So what we have here is a human leader full of pride and hubris who refuses to acknowledge God – even while claiming to be religious – and doing so on the most sacred period of the Christian calendar. Hmm, we better pray for this man. The Bible also records episodes where arrogant leaders who refuse to acknowledge God and bow down to him are brought low by the Almighty.

Why does what God said to Belshazzar through Daniel in Daniel 5:18-21 come to mind here?

O king, the Most High God gave Nebuchadnezzar your father kingship and greatness and glory and majesty. And because of the greatness that he gave him, all peoples, nations, and languages trembled and feared before him. Whom he would, he killed, and whom he would, he kept alive; whom he would, he raised up, and whom he would, he humbled. But when his heart was lifted up and his spirit was hardened so that he dealt proudly, he was brought down from his kingly throne, and his glory was taken from him. He was driven from among the children of mankind, and his mind was made like that of a beast, and his dwelling was with the wild donkeys. He was fed grass like an ox, and his body was wet with the dew of heaven, until he knew that the Most High God rules the kingdom of mankind and sets over it whom he will.

5 Replies to “God, Man and Corona”