It’s a new day. So I must write yet another piece documenting all the frightening cases of government overreach and overkill during the corona crisis. It is now quite easy to offer plenty more cases of much too zealous policing, and yet more draconian steps being taken to completely lockdown a population.

And we have more very worrying cases of not just a docile society of sheep, but worse yet, countless folks who are now so very happy to turn in their own neighbours for supposed and imagined violations of state regulations. That alone should shock every single one of us. 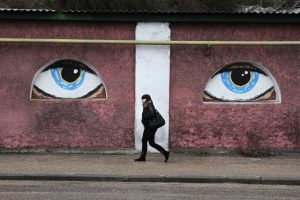 Let me very briefly mention a few more recent cases of all this, and then I will turn to some commentary by others who share my concerns about the sort of world we are becoming. I start with the scene in Australia:

A woman in Victoria says she was left feeling “heartbroken” and like a criminal after uniformed police officers carrying weapons interrupted her father’s funeral over the Easter long weekend to enforce social distancing rules. It comes as state police forces rapidly escalate the number of people fined for breaching public health orders despite falling infection rates, and amid concerns from law and justice experts the laws are being inconsistently and arbitrarily enforced. www.theguardian.com/australia-news/2020/apr/14/totally-disrespectful-police-interrupt-funeral-while-enforcing-social-distancing-rules-over-easter-weekend

And all this is a terrific revenue-earner: “Australians are still ignoring COVID-19 restrictions, with more than $1 million worth of fines being handed out across the country in a strict coronavirus crackdown. Police officers are out in force this weekend to enforce social distancing laws, amid fears a busy Easter weekend could lead to a spike in cases.” australian-news.site/police-hands-out-more-than-1million-worth-of-fines-amid-coronavirus-crisis/

It is not any better overseas. Consider Canada: “In the name of combating the coronavirus, government officials from one of Canada’s largest provinces, Alberta, are planning to use people’s cell phones as a tool to track their whereabouts. This past Tuesday, the premier of Alberta, Jason Kenney, stated that quarantine orders will be strongly enforced, ‘including using technology like smartphone apps’ to track those under orders to stay home.” www.lifesitenews.com/news/canadian-province-to-track-citizens-via-cell-phones-deal-with-those-who-break-quarantine

A police force in the UK has bragged that its officers may be ‘hiding in the shadows’ ready to catch people who have picnics in rural locations. The Central Community Team, which represents Bedfordshire Police, tweeted out an ominous message that sounds like it could have been ripped straight from the pages of George Orwell’s 1984. “If you think that by going for a picnic in a rural location no one will find you, don’t be surprised if an officer appears from the shadows! We are covering the whole county,” states the tweet. summit.news/2020/04/13/uk-police-force-brags-about-hiding-in-the-shadows-to-catch-picnic-goers/

Another UK case: “A 12-year-old girl was playing basketball alone on a court near her family’s home when city officials arrived and removed the hoop as part of ‘social distancing’ enforcement.” www.dailywire.com/news/young-girl-plays-basketball-alone-city-takes-hoop-as-part-of-social-distancing

One last horror story from the UK:

Police officers in the UK have broken down a man’s front door in order to “double-check” he wasn’t violating social distancing rules. The man, who recorded the incident on his phone, soon after uploaded the footage to social media which has since gone viral. . . . It’s believed the police officers and the person who complained mistook the man’s television for conversation. caldronpool.com/shocking-police-break-down-mans-front-door-to-double-check-he-wasnt-violating-social-distancing-rules/

OK, enough of these horror stories (and there are plenty more like them). Now for some commentary. Adam Creighton in the Australian begins his new piece this way:

Stay safe. Keep well. Perhaps a hysteria has gripped the nation, at extraordinary cost, when we’re telling each other to take special care over a disease that in three months has killed about 60, in the main quite unwell elderly people. Even in coronavirus hot spots in Europe and the US, there’s greater chance of being killed in a car accident than being harmed by COVID-19, according to research published last week by Stanford scientist John Ioannidis.

“The risk of dying from coronavirus for a person under 65 years old is equivalent to the risk of dying driving a distance of nine to 415 miles by car each day during the COVID-19 fatality season,” he concluded. Yet many of those under-65s have had their lives pulled apart, including loss of 195 million jobs around the world this quarter, according to the International Labour Organisation.

In Australia at the very least, with so few deaths and infections, the response to the virus is starting to appear to be a damaging over-reaction. Last month’s draconian response by officials — inducing a recession, destroying millions of jobs and businesses, and locking us all up — was at least politically understandable. The hankering for total lockdown, cheered on largely by those who would be relatively unaffected by it, was irresistible.

Yet as more real data rolls in — as opposed to the wildly inaccurate epidemiological forecasts of millions of deaths globally and many thousands locally — justifications for massive interventions, fiscal and civil, are dwindling. www.theaustralian.com.au/commentary/we-may-be-overreacting-to-an-unremarkable-coronavirus/news-story/3d78be873fac364af49f5fc949e3eaeb

Scott Morefield examines seven arguments put forward by the COVID-shamers. Here is the seventh one:

“If one life is saved it’s all worth it.”

This is another commonly used phrase, but it’s also one of the most absurd. If “one life saved” is worth any action, why not stop driving to ‘save’ the 1.25 million car accident deaths worldwide each year? Sure, flying is the safest form of transportation statistics-wise, but if we had stopped it in 1970 we’d have ‘saved’ the 84,000 people who have died in the past 50 years from aviation accidents. Or how about the 2.3 million who die every year from occupational accidents and work-related diseases? If those lives ‘saved’ aren’t worth stopping work entirely, I don’t know what is. I mean, we’d all exist in soul-crushing poverty and die from starvation or some third-world disease but hey, ‘one life,’ right? Of course, life is precious, but when the heavy hand of government takes historic, unprecedented measures to put one victim group over all others, creating additional victim groups in the process, that “one life” saved ultimately comes at the cost of many, many others. townhall.com/columnists/scottmorefield/2020/04/13/covidshamers-and-seven-of-their-most-ridiculous-arguments-n2566777

John Zmirak puts it this way:

There’s a virus in the air, all right, alongside the Wuhan Flu. It’s potentially more deadly. It breeds in the souls of our elites and spreads via the schemes of our politicians. The “Tyrannovirus” is not a new disease. We’ve endured it since the Fall of man. But like a biological virus, it mutates and takes different forms to overcome our defenses. And in time of crisis, such as a pandemic, we’re open to opportunistic infections….

Politicians like Gov. Andrew Cuomo and oligarchs like Bill Gates have tipped their hands. They promise us that the “new normal” we face after the virus has peaked might include:

Will we let the architects of so many fraudulent political power grabs exploit a very real disease? Their goal remains the same as it has for decades: the “fundamental transformation” of America.

We should support and respect reasonable laws protecting the public. But we must be fiercely alert to the countless ways that the Tyrannovirus is trying to infect us. We need to push back hard against any unequal treatment of the institutions we care about, which the left despises. We shouldn’t be as unreasonable as the LGBT lobby was when it fought to keep gay bath houses open through the AIDS crisis. But we can learn something from them: the squeaky wheel gets the grease. In politics, chutzpah pays off. And moderate, reasonable people get shoved aside.

We know how the Tyrannovirus operates. And its target isn’t the body. It’s our soul. stream.org/theres-no-vaccine-for-the-tyrannovirus/

Finally, Rod Dreher offers some realism about how easily we are allowing a surveillance state to emerge. He shares part of an ominous NYT report: “In one of the most far-ranging attempts to halt the spread of the coronavirus, Apple and Google said they were building software into smartphones that would tell people if they were recently in contact with someone who was infected with it. The technology giants said they were teaming up to release the tool within several months, building it into the operating systems of the billions of iPhones and Android devices around the world.”

It’s a brilliant idea, and it will work. We may soon find ourselves in a situation where, in order to re-enter the workforce, one has to accept the app and use it. If the other option is more lockdowns, more shutdowns of the economy, which do you think people will prefer? Apple and Google are saying that this will naturally come with privacy provisions in place. I’m sure they will — and I also expect that they will be worthless. Here’s the thing, though: data companies already track us now. They’ve been doing it for years….

We should be very, very vigilant about how we talk about health and safety, so that we guard against bad actors making malicious political use of proper concern for health and hygiene. This pandemic is going to cause tremendous social changes, especially changes in the way we all regard the power of the state, the role of technology in our lives, and the limits of liberty. I am a pessimist. I think the oppression of traditional religious believers and social conservatives is coming, and that “contact tracing” of those carrying “unhealthy” ideas is on its way in America — as it already exists in China. It is unlikely to be stopped, because of the rapidly growing secularization and social liberalization of Millennials and younger generations. I believe we have to fight it when we can, but we should absolutely prepare ourselves to live as dissidents, including living some aspects of our lives underground. www.theamericanconservative.com/dreher/contact-tracing-coronavirus-political-religious-dissidents/

As I have said before, the only thing that bothers me more than all of the above is the number of subservient sheeple who still believe “My government right or wrong” and who look at folks like me as the real problem, and not out-of-control statism.

18 Replies to “Our Growing Surveillance State”