Have you ever had to deal with an argumentative Christian troll?

I have been heavily involved in the culture wars for well over 30 years now. They will certainly bring out the trolls, miscreants and critics. And with the advent of things like the internet, the social media, and so on, these wars are now instant, relentless and intense. It did not always used to be this way of course.

Yes, controversial issues have always been debated, but not all that long ago you did it with a neighbour over the fence, or engaged in very slow and unexciting debates in newspapers as you sent in a snail mail letter and hoped you would see it in print in a few days’ time. 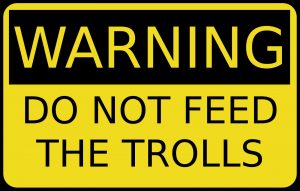 All that has now changed, and folks who are naturally belligerent, bellicose, argumentative and arrogant – and who have lots of free time on their hands – have found the perfect environment in which to go on slash and burn campaigns, if not carry out scorched-earth policies.

The rise of the internet troll is scary stuff indeed. Many folks are afraid of them and don’t know how to deal with them. Since I – sadly – have to deal with them just about every single day, I know a few things about the issue. Indeed, I have penned a number of pieces already offering advice on how to deal with trolls. Here are four of them from the past four years:

It seems I will have to keep writing pieces like this because there will always be obnoxious, vexatious, troublesome and annoying trolls among us. So here I go again. But here I will deal with a real headache: the ‘Christian’ troll. I have been involved with far too many of these folks over the years sadly.

Indeed, I could spend quite a lot of time discussing some of the many trolls I have had to deal with. As but one example, let me mention a very trying Christian troll that I finally had to let go of (unfriend) on the social media. After spending quite a bit of time with her, trying to deal with her constant attacks, and praying for her, it became obvious that she was utterly unable to be reasoned with.

And one very common feature of these trolls is the fact that they are so self-righteous and Pharisaical that they are constantly doing the very thing they attack you over. This gal delighted in arguing with me and others for weeks on end, constantly criticising everything we said, all the while telling us how terrible and unChristian it is to criticise others!

Good grief these hypocrites are so blinded by their own religiosity and sense of moral superiority that they are seemingly unaware of their own blatant faults. They cannot see that they are the ones doing the very things they say no Christian should be doing. This gal even claimed that I and others were demonic as she kept up the attacks! As I say, you cannot reason with them– they are living in their own little spiritual bubbles.

And there have been so many other folks just like her that I have been involved with. I will put up with them for a while, hoping they might come around, ease up on their attacks, and maybe show me a bit of Christian grace. But when it becomes clear that they are not at all interested in stopping the constant criticism and arguing, then I have no reason to let them keep trolling.

In fact I tend to run with a ‘three strikes and you are out’ rule. If a person is known to be a troll who just loves to argue and will NOT stop, even after being asked politely and repeatedly to stop, then there is no reason at all to keep a person like that around.

They obviously have issues which God needs to deal with. But if we keep turning a blind eye to their vexatious and quarrelsome spirit, and give them a free pass, we do them no favours. It is often only when a person is denied a platform like this that they may, hopefully, spend some time with God and perhaps listen to what He is trying to teach him.

The truth is, there is absolutely nothing spiritual or godly or Christlike about winking at troublemakers and trying to placate them and make excuses for them. That is a great way to destroy what God has called you to do, and not a great way to show true Christian grace.

Yes, we should seek to be gracious and patient with folks. But we owe trolls nothing, and if they keep proving themselves to be contentious arguers and serial pests, it seems to me the answer is pretty clear: let them go, and let them cause harm and mischief and damage to the Body of Christ elsewhere. We are under no obligation to let them white-ant the good we are trying to do.

The truth is, when dealing with such troublemakers and trolls in a firm manner, we are aiming for at least two outcomes: One, when folks have obvious issues, we want God to be able to minister to them. If we keep giving them a free pass and do not take firm action with them, they may lose that opportunity to have God speak to them and deal with them. So out of love for our brothers and sisters, we sometimes need to engage in some tough love.

And two, when I find a website or FB page where some trolls are allowed a free run, it tends to turn me off and I stay away from such places. I know that many others tend to feel the same way. So if we want a lot of traffic or visitors on our sites, and want to use them for the Kingdom, then such trollish behaviour has to be nipped in the bud right away, or we risk losing all the good work we have put into them.

Indeed, I have had to share with others how they are allowing trolls to undermine their work for Christ and getting their good efforts derailed. Some do not know how to properly deal with trolls. Some will just ignore them, maybe thinking that this is the Christian thing to do.

And they will not deal with the false and objectionable things these folks are saying. Giving troublemakers a free run on your site or page helps no one. It allows the enemy to undo the mission you are on, and it means we are allowing argumentative and contentious folks a dream run on our sites.

Sometimes these folks will tell me that they believe the trolls have a ‘good heart’ or mean well. But that is not really the point: allowing troublesome trolls who mean well a free run will cause just as much of a problem as allowing those who have a bad heart!

Some of these folks think they must be ‘gracious’ and keep giving these troublemakers a second chance – and a third, and a fourth, and a fifth, and so on. They seem to think that dealing firmly with them is somehow not the way Jesus would act. Um, our Lord told us that when folks are unreceptive and hostile to our message, we should just leave them and shake the dust off our feet. He also warned us against casting our pearls before swine.

And Paul often warned us about the quarrelsome and disruptive brother or sister. Just a few verses can be mentioned here. In 1 Timothy 6:4-5 Paul warns about those who are “conceited and understand nothing. They have an unhealthy interest in controversies and quarrels about words that result in envy, strife, malicious talk, evil suspicions and constant friction between people of corrupt mind.”

And in Romans 16:17 he says, “I urge you, brothers and sisters, to watch out for those who cause divisions and put obstacles in your way that are contrary to the teaching you have learned. Keep away from them.”  One more: in 2 Timothy 2:24a he says that “the Lord’s servant must not be quarrelsome”.

So we cannot simply ignore them or wink at their contentious and troublesome ways. Indeed, by never confronting them and by always giving them yet another chance, we may well be short-circuiting what God wants to do in their lives. I know God often needs to get us in a hard place before we begin to properly listen to him and start growing as we should.

When a Christian is not loving enough to offer someone a much-needed Christian challenge or rebuke, they may well just keep going on with their unChristian attitudes and actions. I see it like this:

-the overly kind-hearted (but not very helpful) dentist or doctor will stop necessary medical treatment every time the patient squirms a bit and says ‘everything is fine – please, no more!’

-the truly loving (and firm) dentist or doctor will not stop every time the patient feels a bit uncomfortable, but will keep doing the necessary treatment to help or save the patient.

Yes, Christians should be gracious where and when necessary, but sometimes we can show ‘cheap grace’ and as a result, what God is wanting to do with someone is not allowed to happen. So we need to pray for real wisdom here with each person like this that we are dealing with!

And pray that we have not just divine wisdom but divine patience and grace as well. If some folks are much too afraid of confronting the troublemakers, some may be much too quick to react. Somewhere in the middle is that elusive biblical balance.

14 Replies to “On Dealing With Trolls, Yet Again”