If you have not yet heard about Texan hair salon owner Shelley Luther you really need to – so keep reading. A judge has sentenced the Dallas mother to a week in jail and a $7,000 fine. Her crime? Seeking to feed her family. She could have avoided that had she apologised, closed the salon, and admitted she was “wrong”. But true to her namesake, she could do no other – she had to stand.

The Dallas County State District Judge Eric Moyé, a Democrat and Obama appointee, also said she would have to pay another $500 each day the salon remained open. It seems the only thing the judge could have added as he berated the mother is this: ‘On your knees peasant and lick my jackboots! Grovel and repent, and I might consider letting you off the hook.’ 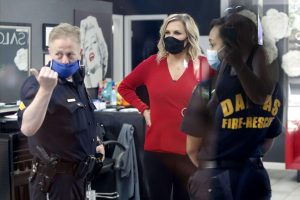 Indeed, what the judge effectively told the mother was this: ‘You want to feed your children? Then go to jail you selfish bastard!’ That is the line the Dems and the corona alarmists have been peddling all along: anyone concerned about the loss of liberties and the need to have an income is just a selfish pig.

While the Democrat judge treated her with contempt, Luther was polite and respectful in her response: “I have much respect for this court and laws. I have never been in this position before and it’s not someplace that I want to be. But I have to disagree with you, sir, when you say that I’m selfish because feeding my kids is not selfish. I have hair stylists that are going hungry because they’d rather feed their kids. So sir, if you think the law is more important than kids getting fed, then please go ahead with your decision, but I am not going to shut the salon.”

Wow, reminds me of another brave Luther who 500 years ago refused to bow down to the authorities and recant. She could not abandon her children and her conscience, so she was willing to face the consequences. In my book this woman is a hero.

And just in case there are some squeamish and limp-wristed Christians here saying we must never ever go against the state, let me remind them that this is patently false, and there is a biblical place for civil disobedience: billmuehlenberg.com/2008/11/02/christians-and-civil-disobedience/

And see too my recent piece on how the Christian should view the state: billmuehlenberg.com/2020/05/05/christianity-and-the-state/

Not that I am saying that this mother is a Christian – I do not know anything about her religion, or lack thereof. Those in the know might inform me of this matter thanks. But the biblical Christian has no problem with sometimes resorting to civil disobedience when conflicting duties arise.

Thankfully a huge outcry from freedom-loving Americans has been heard, and many prominent politicians and others are rallying to her defence. Dan Crenshaw, the former Navy SEAL officer serving in the US House of Representatives for Texas’s 2nd congressional district, said this about the ruling: “These punishments are NOT just. They are not reasonable. Small-minded ‘leaders’ across the country have become drunk with power. This must end.”

Texas Senator Ted Cruz tweeted this: “7 days in jail for cutting hair?? This is NUTS. And government officials don’t get to order citizens to apologize to them for daring to earn a living.” Social and political commentator Rush Limbaugh said this about her case:

He continued: “this is a tinderbox situation that is, I fear, being replicated in many parts of this country where these authoritarians are. You know, all politicians have a craving for power. It is a miracle the United States Constitution still rules the roost.”

One radio host said this: “The judge’s commentary is so sick and twisted and diseased that he should be thrown off the bench. Within this, there are two Americas: the people who believe that Shelly Luther is fighting for the very principle of being able to live her life as she sees fit, and those who believe that government is all-powerful in every way – even when they are in the wrong – and that if you grovel at his feet because of the robe on his back, then maybe, just maybe you won’t go to jail.”

The Texas attorney general Ken Paxton said Luther “should immediately be released from jail.” He said, “Locking her up is a misguided abuse of power, especially considering Dallas County released real criminals to ‘protect them from COVID-19’.” And Texas Governor Greg Abbot agreed with him that the judge in the case took “excessive action.”

Also, Lieutenant Governor Dan Patrick tweeted: “7 days in jail, no bail and a $7K fine is outrageous. No surprise Texans are responding. I’m covering the $7K fine she had to pay and I volunteer to be placed under House Arrest so she can go to work and feed her kids.” And a Go Fund Me site has already raised over $435,000 for her and the salon: au.gofundme.com/f/shelley-luther-fund

It is terrific to see so many Americans – including so many prominent ones – coming to her defence. This is so very vital, since all over America rogue leaders – almost always Democrat mayors and governors – have been releasing convicted criminals from prisons (to keep them safe from corona), while putting innocent American moms and dads in their place. This is outrageous.

Indeed, about the only thing worse than the emerging corona police state are all the sheeple – including Christian sheeple – who don’t give a rip about all this. They are living in fear and panic, and snitching on neighbours just like in Communist countries.

They are actually siding with the leftist authoritarians who prefer to strip Americans of their civil liberties and bankrupt the nation. One has to say, if this was a test run to see how quickly and easily the State can shut down a nation, with so very little protest, this has gone like a charm.

I for one applaud brave champions like Luther. With her and another courageous Luther I must continue to insist: Here I stand. I can do no other.