We often speak about the culture wars. You would have to have been living on Mars for the past half century if you do know what this means and what it entails. All around the West there are major battles raging over a whole host of social, cultural and moral issues, be it abortion or marriage or religious freedom.

Let me point out an obvious truth here: these battles are upon us whether we like it or not. There really is no option for people to try to sit on the fence here. We do not have the luxury of just sitting these battles out. We are in a war right now, and we must decide where we will stand.

I am reminded of this short bit of dialogue from Tolkien’s The Two Towers: 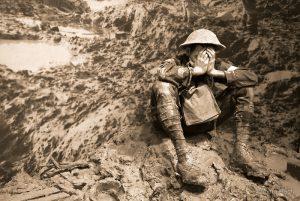 Pretending these battles are not taking place, or that we can simply go missing in action just does not cut it. There really is no place for deserters in these important battles. At the moment in Australia the most important fight is over the issue of legalising “homosexual marriage”.

This is a hugely important battle, and it is one that anyone who identifies as a Christian must be engaged in. Indeed, I will go so far as to say this with complete conviction: If you claim to be a Christian but think you can somehow just sit out this battle and not say a word, you may have good reason to check your Christian bona fides.

The words of Bonhoeffer of course come to mind here: “Silence in the face of evil is itself evil: God will not hold us guiltless. Not to speak is to speak. Not to act is to act.” Yes it really is that serious, and your refusal to speak up when it is so very vital, whether because of cowardice or whatever, is that serious as well.

This is without doubt one of the most important battles we are now involved in, and everyone must play a role. There can be no conscientious objection here. There can be no fence sitting here. On such a crucial issue, you are either for God’s institutions of marriage and family or you are against. There is no neutral ground here.

Yet incredibly I know of far too many Christian leaders either refusing to speak out on this, or worse yet, actually siding with the “Yes” case! As but one shocking example, I know of one pastor who actually says that he refuses to tell his people how they should vote on this! He said he knows people with differing political views in his congregation, so he would not speak on what to do! Staggering!

He went on to talk about how he does not want to “ostracise” and “polarise” people – so he has deliberately chosen not to tell people how he will vote. Oh good grief. To paraphrase what Aragorn said, polarisation is upon you whether you want it or not.

The other side has started the polarisation by declaring war on marriage and family. To simply affirm and defend what marriage has always been will polarise people. Um, that is the nature of truth: truth always will polarise and ostracise those who do not believe it and reject it.

One might as well have been a pastor in Germany in the 30s and claim that you cannot speak out on this, since there are Nazis in the congregation, and we sure do not want to offend them or ostracise anyone. Just imagine what Bonhoeffer would say to such false shepherds!

And we had “Christian” pastors refusing to speak out on slavery two centuries ago because they had slave owners in their congregations? But I digress. Let me offer some pointers here for those who wish to engage and stand for truth.

Let me begin by saying that it is great to see folks starting to engage in the culture wars in general, and the homosexual marriage debate in particular. Many of you are for the first time wading into these waters, as you see the importance of speaking up for traditional marriage. Well done!

But let me offer a few bits of advice on how we can engage in some of these battles. And much of this is in relation to the social media, and how we can use it to share truth and refute error. Something like Facebook can be a great tool for this, if used rightly.

One point I need to emphasise here is this: please do not allow trolls and haters to take over your posts. If you are unable or unwilling to debate them and refute them, then at least learn how to delete or block the worst offenders. If you do not know how to do this on FB, ask your kids or grandkids (or see below).

The truth is, not everyone who comes to your page is a real friend. There are such things as trolls – those who just argue for the sake of arguing. And there are ideological opponents who roam throughout the social media, looking for who they can gang up on and bully. You do not need to allow this!

If you think a person is open to truth and might be persuaded, fine, then spend time engaging with them. But if it becomes clear they are just haters and trolls, get rid of them! There is no need whatsoever to allow them to take over your page and your posts and drown out the truth.

Again, if you do not know how to do any of this, ask your children! But we must start getting wise here – otherwise we are like those going into battle, knowing nothing about how to load and use a rifle. You will just get picked off real quick if that is the case!

So we need to be smart and savvy in these debates. As I say, it is terrific to see folks finally getting involved in these debates, but they need some wisdom and courage here. Allowing trolls to go unchecked on your posts as they spread lies is not the way to go. Either engage with them, or block the obvious trolls who have just come to cause trouble.

And here is how you can do the latter: Just click on the top right of any offending comment with your cursor and a “remove this” option will appear which you can click on. When you do that, you will also get an option to block the person if you want.

Use this if need be! Do not allow your posts to be swamped by lies and hate from the other side – especially if you are not game to answer them! And you may need to change your general posting settings as well. If you are getting all sorts of strangers showing up on your posts attacking you, then change your settings from ‘public’ to ‘friends’. Again, our kids know how to do this if you don’t!

And please make use of all the great resources that are out there on these issues. I am still shocked to be honest when people come to me and say, “Bill, have you got anything on homosexual marriage?” That becomes a real facepalm moment for me alas!

Um, with three books on this, 500 articles on marriage and 800 articles on homosexuality, well yes – I do have resources on this. Please avail yourselves of them! Why do you think I spent the past 30 years working on all this!? A number of us have written books and articles and set up websites to arm you with information for these debates. Please use them!

And be aware that some of us cannot fight everyone else’s battles. We each have to learn how to do our own work in this regard, and not just hope someone else will come and bail us out when we get in a debate. I try to help if and when I can, but I cannot fight the battles of hundreds of other people!

Another bit of advice is this: at the end of the day this is not just an intellectual or social debate – it is an all-out spiritual war. It is a very real war, so cowards, men-pleasers and spineless wonders will get nowhere fast. We need soldiers and warriors for Christ here who will enter into the battle with truth and love and Holy Ghost boldness. Nothing less will suffice.

Speaking of which, I keep getting people contacting me who are shocked and hurt by all the hate and abuse they are getting as they enter into these debates. I just had another person call me a few hours ago on this. I say to them: “Welcome to my world”! I have faced this for decades now.

I will of course pray for these folks and try to help them when I can, but they need to heed some of the advice I have given above. Get a bit smarter here in how you do intellectual and spiritual battle. Get some prayer cover. Get some others to support you.

And remember, every single one of us has a role to play. No war will ever be won if the majority of troops just sit back in the barracks and avoid the various key battle fronts. They might hope that a few battle-hardened soldiers can save the day, but they are just kidding themselves.

Every single person has a role to play, and when everyone is not playing their role, then the entire side suffers greatly. So please engage, and please start standing up for what matters most. In a war we need to get real smart and real resilient real fast!

Bless all of you who are now entering into some of these battles – many of you for the very first time. You are heroes! God bless you! Do not give up! Keep standing strong! With your engagement and involvement we can make a real difference.

Let me repeat something that I said above, as it is the one main takeaway from this that I want you to get:

If you claim to be a Christian but think you can somehow just sit out this homosexual marriage debate and not say a word, you may have good reason to check your Christian bona fides. It really is that serious, and your refusal to speak up when it is so very vital, whether because of cowardice or whatever, is that serious as well.

28 Replies to “Advice For Those Entering Into Battle”