If all the ‘love, tolerance, diversity and acceptance’ of the pro-homosexual marriage camp is this bad now, just imagine how much worse things will get if and when it is legalised. Daily we find horror stories of really ugly and nasty bullying, bigotry and barbarity from the pro-camp.

The stories just keep on coming, and they sure are not pretty. The hatred and bitterness and rage flowing from the “Yes” camp has even been shocking and turning off hardened observers. Many have said that whereas they had planned to vote in favour of homosexual marriage, because of all this relentless bullying and hate, they will now vote “No”. 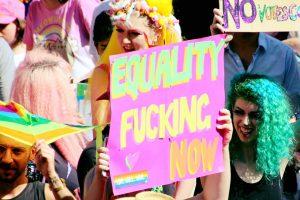 Well, another day, so another set of examples of what life looks like when the militants are in charge. As stated, if it is this bad now, just you wait… Let me start with some really lovely, tolerant thoughts from one activist from the homosexual lobby. As reported in the press:

Coalition MPs have hit out at a “vile” tweet by gay rights advocate Benjamin Law, claiming his joke criticising anti same-sex marriage campaigners amounted to “online bullying”. The comedian and TV star posted a tweet 11 days ago that read: “Sometimes find myself wondering if I’d hate-f*** all the anti-gay MPs in parliament if it meant they got the homophobia out of their system.”
It generated almost 300 likes and many replies, including one that reads, “Start with (Andrew) Hastie,” the Liberal and Christian MP for Canning in Western Australia. Mr Law then tweeted: “[sighs heavily, unzips pants].” Former army officer Mr Hastie yesterday told The Australian: “Noting my skills acquired in my previous career, I’d like to see him try.”
The MP also claimed no one who was against same-sex marriage would get away with such a joke. “If anyone on the No campaign jokingly suggested using sex as a weapon against Yes campaigners, there’d be immediate calls for their resignation and marginalisation. Instead this guy gets a 20,000-word platform from Quarterly Essay.”
Mr Law told the newspaper: “Sure, the member for Canning has decent cheekbones, but he’s a little too clean-cut for my tastes.

Mr Law’s essay, published today, calls for the Safe Schools program to be implemented in every school, and criticises the $122 million postal survey on same-sex marriage for accommodating “those who think same-sex romantic partnerships are inferior to heterosexual ones”. Another reply to Mr Hastie’s tweet read: “Shotgun Bernardi *eyes off George Christiansen’s (sic) whip*.”
Mr Christensen also waded into the discussion, attacking Mr Law’s tweet as “vile filth”. He added: “It’s ironic that most supporters of Safe Schools say they support it because it’s anti-bullying and yet they engage in some of the worst online bullying you’d ever encounter.”

Then we have yet another case of homosexual discrimination:

A Melbourne bookstore has been criticised online after warning people who “vote no” in the upcoming same-sex marriage postal vote to never visit their shop again. “If you vote ‘No’ in the forthcoming plebiscite, please never visit our shop again,” Sticky Institute wrote on its Facebook page.
Enraged social media users held no punches when delivering a string of scathing comments. Others threw their support behind the store’s stance, with more than 1500 people liking the post.
One angry social media user wrote: “And there goes your business… first rule of owning a business is you don’t discriminate. Money is money and it’s hard enough breaking even without taking everything you can get”.
“I’d give no stars but can’t. As an adult with my own brain I don’t like businesses telling me how to vote on a subject,” another wrote. “Obviously run by bigots who are intolerant and practice outrageous discrimination,” another said.

Now, one can make a case that a private business can do whatever it wants, and it can reject any customers it wants. But if we agree with that principle, then why do homosexual activists insist that this cannot be allowed to happen to Christian cake-makers, florists, photographers, etc.?!

They claim this is horrific discrimination and an attack on their human rights. So which is it? Why can a homosexual business say no to customers that dare to hold a different view, but those small business owners who do not want to promote something they find their conscience cannot allow for – eg., baking a lesbian wedding cake – must be made to do it!? Double standards much? Hypocrisy much?

My final example is a real shocker and comes from Queensland. A public meeting on “Safe Schools” – not homosexual marriage – had to be cancelled at the last minute because of all the ugly threats made by the activists. And as usual, most of the MSM totally twisted the truth about the whole event. Here are some reports on this:

If anyone ever tells you that the “Safe” schools program has nothing to do with same sex marriage, please just remember that last night’s event was an information night about safe schools and the same sex marriage protestors shut it down shouting shameful things all to do with them demanding same sex marriage. The event was about safe schools. They turned it into an ugly scene. The news said it was a tussle against sides but that just isn’t true. We had already cancelled the event. Protestors stopped parishioners from turning into their own church grounds shouting hateful slogans. All about marriage. At a cancelled safe schools event.

There were even lies about cars ramming the crowds of protestors. Not true at all:

Queensland police said they monitored the protest — organised by the National Union of Students and partly led by Socialist Alternative members — and there was no record of any cars hurtling towards protesters, nor any other assault or injury.
One witness had seen a driver blocked by protesters from getting into a carpark, but police helped make a path through the crowd. Footage showed the same. The planned meeting, cancelled at the last minute to avoid a confrontation with protesters, wasn’t even supposed to be about same-sex marriage. Instead, the event was scheduled to hear a talk from the Australian Christian Lobby’s Wendy Francis about the Safe Schools program.
Yet for much of yesterday, the protest and allegations were across the media and fed fears that the marriage debate was turning violent….
The ACL-backed Coalition for Marriage slammed the protesters yesterday. “This is another example of the appalling lengths LGBTIQ activists will go to shut down free speech,” said spokesman David van Gend.
“They blocked access to the hall in question, preventing access for those seeking to attend the meeting. They then chose to make some very serious allegations, dismissed as false by Queensland Police, as a way of excusing their bullying tactics.”

As usual Andrew Bolt got stuck into this story. He mentions one grandfather who told him that he had sent this email to the Immigration Minister, who seemed to blame both sides for the clash:

We were contacted about 3.00pm to say that the event had been cancelled because of safety concerns. Can you imagine my outrage today when the misleading media said there was a clash between pro and anti same sex marriage supporters! What happened was unfortunate people who did not know of the cancellation arrived to find they were blocked from entering the car park. They were greeted by these clowns calling them bigots.
And [politicians] got sucked into this nonsense of appealing for tolerance on both sides of the same sex marriage vote. This was not a same sex marriage event and the violence came from activists who obviously alerted to the stations they were going to put on a stink…
I cannot believe how this country has gone down the sewer under successive weak Governments. Fifty years of paying taxes and I cannot even go to a meeting now without harassment at best and cancellation at worst. Please stand up for the silent majority.

As I said, if all these nasty assaults on ordinary Australians are occurring now, and if all these deplorable attacks on our freedoms are daily happening, just how much worse will things be when homosexual marriage gets the green light? We are already in a very precarious place in which Australians are afraid to say what they believe, or simply attend a public meeting.

If faux marriage becomes law, you can expect all this bigotry and bullying to be ramped up massively. Will they start filling the jails with all the recalcitrants and conscientious objectors? Time will tell.

Much better to take a very strong stand now against all this thuggery and intimidation, while we still have the freedom left to do so.

(BTW, apologies for the language in the photo. But we need to be aware of what we are up against here.)