Now that the postal vote on homosexual marriage is under way, some politicians have panicked, claiming we must clamp down on fundamental freedoms so that no one (that is, no one from the “Yes” camp) gets their feelings hurt. So they have rushed through a federal bill to further restrict our freedoms and further prevent truth from being told.

Believe it or not, we now have “emergency laws” in place to ban ‘vilification and intimidation and threats’ in the homosexual marriage debate – at least until the end of the matter in mid-November. And anyone found guilty of such things can face a $12,600 fine!

Wow, if free speech will be so throttled while we simply try to debate this issue now, just imagine how much worse it will get if homosexual marriage is legalised. This law is a real worry. As one government spokesman explained: 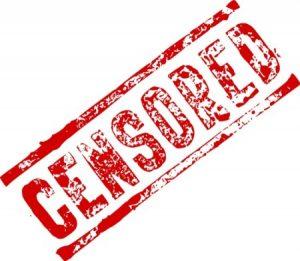 “It will be unlawful to vilify, intimidate or threaten to harm a person either because of views they hold on the survey or in relation to their religious conviction, sexual orientation, gender identity or intersex status. That will be a sunset provision, it will only last for the period of the postal plebiscite.”

As one news report states, “The laws, to be rushed through both chambers of Parliament by Thursday night, will apply to ‘conduct’ during the campaign, which could include advertising, leaflet materials or behaviour.” Well, thanks, that is so very nice and specific.

Good to know exactly what I could be slammed for by the heavy hand of the law. Some sort of conduct involving some sort of behaviour. Leaflets. Ads. Well that really narrows things down then doesn’t it. We all know exactly where we now stand, or should stand – Not.

Thankfully some voices have been raised warning about such draconian legislation:

Tuesday’s Coalition party room meeting green-lighted the new laws despite internal dissent from Liberal MP Tim Wilson, who had concerns about freedom of speech. He was backed by his former employer, the libertarian Institute of Public Affairs think tank, whose director Simon Breheny accused the Coalition of “playing with fire”.
“Vilification laws are used to silence opponents,” he said. “These laws are a dangerous limitation on individual freedom.”

And Cory Bernardi has just spoken about the bill. He says it is “is about ‘protections’ to make hurt feelings an offence during the debate on redefining marriage.” He continues:

This was rushed into the senate this morning and within hours passed with little critical examination – but with plenty of emotional and self-serving stories over how nasty the debate has been. Unlike most, I chose to question the government over some contents of the bill and frankly wasn’t satisfied with the answers.
Firstly, it overturns the people’s right to access the legal system by requiring their complaint to be first approved by the Attorney-General, who coincidentally is a cheerleader for the rainbow brigade.
Secondly, the Minister was unable to explain whether it would be an offence to share (via social media) pre-existing and previously published images, videos or other material that doesn’t comply with the new rules. This could potentially impact millions of people and so I have been forced to write to him seeking an answer.

Yes. For heaven’s sake, all this is utterly ludicrous. If I distribute a pamphlet with five simple words like “It’s OK to vote No,” guess what? Anyone in favour of homosexual marriage can tell me he feels threatened or vilified or intimidated. Indeed, they are already claiming this is hate speech, so it looks like this simple ad may well be verboten – and we will have to cough up the $12,600 if we dare to still run with it!

And stating other perfectly true and objective things like: “Children have a right to have their own mother and father” can also be seen as hostile and threatening by anyone who holds to another point of view. Just who decides these things? Just who will determine what is threatening and vilifying?

It sounds like a small army of bureaucrats will have to be employed by us taxpayers just to assess each and every word, sentence, paragraph, article, ad, video, leaflet or book that appears in the next four weeks. And why do I suspect that only material from the “No” camp will be looked at carefully?

Just the other day I reported on how one leading homosexual activist and Fairfax journalist actually called for the rape of “No” campaigners. Yes he actually said that – see here: https://billmuehlenberg.com/2017/09/11/things-bad-now/

Now if there was ever anything threatening, vilifying, and intimidating, that would be it. Will Mr Benjamin Law be the first to appear before these courts and tribunals? If not, why not? Indeed, why do I suspect that he and so many others who have regularly poured actual vile abuse, hatred and contempt on their opponents will never be subject to such laws?

That is forever the problem with this type of legislation: these laws are utterly subjective, and those who are found guilty are forever at the mercy of those who determine what is ideologically and politically correct. Consider when I say ‘marriage is between a man and a woman,’ I believe I am making an entirely truthful and factual claim.

However my opponents will only see it as hatred, bigotry, narrow-mindedness and the like. As such, they will be threatened by it and feel it vilifies them. So we will likely lose every time here. Indeed, these laws always begin with the premise that you are guilty until proven innocent.

You have to prove to the powers that be that what you said is NOT hateful or offensive or threatening. Thus the laws actually work against the innocent, and align with those who want to drag every recalcitrant to the various tribunals and courts.

Not only that, but as is always the case, the process is the punishment. Even if after a likely lengthy and expensive process a person so charged is able to clear his name, he already has suffered greatly. He has been vilified and demonised in the eyes of the courts and the media, and he has had to pay for his defence and spend all that time doing so.

The law acts as a deterrent in other words: dare to say no to homosexual marriage, and the authorities will likely come after you. That is a great way to intimidate people into silence, and scare off most folks from ever daring to open their mouths on this vital issue.

Thus it is entirely counterproductive: if the idea was to make sure free and open debate takes place, they will instead get exactly the opposite result. They will stifle free speech, penalise those who dare to speak up on these matters, and effectively silence anyone who goes against the tide.

It is a brown shirt tactic, in other words. It is a terrific way to make sure the “Yes” case gets a full hearing, while the “No” case becomes increasingly marginalised, restricted and squashed altogether. Welcome to the Brave New World of Rainbow censorship and oppression.

And if you think things are bad now, just wait until the militants get their fake marriage. You ain’t seen nothin’ yet. We have been making this case for years now. Just today for example law professor Augusto Zimmermann pointed out some inconvenient truths:

Ever since the Canadian Parliament legalised it, in 2006, same-sex marriage must be treated identically to traditional marriage in law and public life. Civil celebrants were the first to feel the remarkable consequences of such legal change. Several provinces refused to allow civil celebrants a right of conscience to refuse to preside over same-sex weddings. At the same time religious organisations were fined for simply refusing to rent their facilities for post-wedding celebrations. Finally, ‘Queer theory’ is now part of the compulsory school curriculum, and business owners do not have freedom to deny any service to gays and lesbians for religious reasons.
Related to this situation, in the United States, soon after that country’s judicial elite arbitrarily imposed the legalisation of same-sex marriage, the Obama administration handed down regulations requiring all entities contracting with the federal government to adhere, without exception, to absolute non-discrimination on the basis of sexual orientation and gender identity. In addition, a number of state and local governments have banned the participation of any organization that refuses to be publicly committed to non-discrimination concerning sexual orientation, gender and gender identity.

And as Tony Abbott also reminded us today:

To demand “marriage equality”, therefore, is quite misleading. Same sex couples already have that. This debate is about changing marriage, not extending it. And if you change marriage, you change society; because marriage is the basis of family; and family is the foundation of community.

Careful Cory, Augusto and Tony – your words are clearly threatening and vilifying to some. Better make sure your bank balance is ready for the possible penalties.