The internet and social media have created a relatively new and malicious monster: the troll. Today mischievous and irksome trolls seem to be everywhere, and anyone who seeks to share truth online will encounter a regular army of these serial pests. I certainly get my fair share of them.

If you are still in the dark as to what a troll actually is, a Wikipedia definition will suffice here:

In Internet slang, a troll is a person who starts quarrels or upsets people on the Internet to distract and sow discord by posting inflammatory and digressive, extraneous, or off-topic messages in an online community (such as a newsgroup, forum, chat room, or blog) with the intent of provoking readers into displaying emotional responses and normalizing tangential discussion, whether for the troll’s amusement or a specific gain.

There are all sorts of trolls, but it seems the secular left produces them in record numbers. Atheists, militant homosexuals and rabid pro-deathers all seem to delight in trolling, and they really have perfected the art. Obviously their favourite targets are conservatives and Christians. 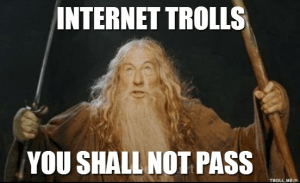 I have had to deal with so many of these tedious and rather clueless trolls over the years. It is always the same old vacuous, ignorant and whacko objections and “arguments” they throw your way. It is especially amusing – and pathetic – to see some gung-ho misotheists pretend they are learned biblical experts and theologians.

They toss around useless criticisms and complaints, revealing they do not have the slightest clue as to what they are talking about. They will lob some objection – or even a biblical passage – in your lap, vainly thinking they have offered some knock-down argument or made some brilliant point. Ha!

Um, guess what? It is the easiest thing in the world to simply rip a text out of context, or to ignore the totality of the biblical revelation – any fool or troll can do this. A text without a context is a mere pretext. And another basic rule of biblical interpretation is to compare Scripture with Scripture.

Isolating one text and not considering other passages on the same issue is how cultists and heretics operate. It is also how atheist trolls and other sceptics operate. We see this occurring all the time. Consider another example of atheist trolling making the rounds.

This landed in my website as a comment awaiting moderation. It not only looked like yet another lousy meme making the rounds, but given that the guy did not even get my name right, it tipped me off right away that a troll was at work. He began by calling me David!

Last time I checked, that was not my name. I did a quick internet search, and sure enough this guy had posted the exact same comment on another site – but this time the guy person with the site was in fact named David. More on him in a moment. I of course did not post his comment.

But since it seems this silly objection is making the rounds, let me briefly deal with the seven points it raises. It is meant to show that Christians are somehow hypocrites because we go on about things like homosexuality but supposedly ignore other biblical matters. Here is how it goes:

1. Jesus said Give Away EVERYTHING You Own: Luke 14:33
So then, none of you can be My disciple who does not give up all his own possessions.
2. Jesus said Don’t Plan for The Future: Matthew 6:34
So do not worry about tomorrow; for tomorrow will care for itself.
3. Jesus said Don’t Defend Yourself if Attacked: Matthew 5:39
But I say to you, Do not resist the evil man [who injures you]; but if anyone strikes you on the right jaw or cheek, turn to him the other one too.
4. Hate Your Family: Luke 14:26
If anyone comes to Me, and does not hate his own father and mother and wife and children and brothers and sisters… he cannot be My disciple.
5. Jesus said Don’t Save Your Money: Matthew 6:19
Don’t store up treasures here on earth, where moths eat them and rust destroys them, and where thieves break in and steal.
6. Jesus said Give Anything You Have to Anyone Who Asks: Matthew 5:42
Give to those who ask, and don’t refuse those who wish to borrow from you.
7. Jesus said Do NOT Pray in Public: Matthew 6:6
When you pray, go to your room, shut the door, and pray to your Father… in that secret place.

Well duh! Any Christian with even a modicum of biblical knowledges knows how bogus this is. As mentioned, ripping texts out of context and ignoring all of Scripture is as easy as it is mischievous and disingenuous. So let me very quickly reply to each one.

1. Um no. In truth, Jesus went even further – we should be willing to give up everything – even our very lives – for the sake of the gospel. Being willing to let go of material possessions is part of this. But at other times Jesus told people to go out and buy things! And the rest of the Bible of course affirms the right to possessions and private property. See more on this here: billmuehlenberg.com/2016/05/30/bible-private-property/

2. The verse means just what it says: do not worry about the future, but commit it to God. That is a basic biblical theme found throughout Scripture. But that has nothing to do with not being wise and careful with our time, making provisions for the future, and thinking about what we might do in the days ahead. Careful and prayerful planning and considerations of how to proceed in life are a part of biblical wisdom. Try reading the book of Proverbs for starters on this. And elsewhere in the gospels Jesus enjoins these very sorts of wise and prudent actions. As but one example, see his discussion of counting the cost in Luke 14:25-35.

3. Here Jesus speaks of being willing to put up with personal insults and the like. It is NOT a total prohibition on standing against evil. There is a place for dealing with injustice and the like. And all of Scripture does affirm the right to self-defense. See these two articles for much more detail on all this:
billmuehlenberg.com/2011/04/20/difficult-bible-passages-matthew-539/

4. As any basic Bible commentary or worthwhile sermon will make clear, this is about contrasts. This is in fact a Semitic idiom which speaks about such contrasts. In comparison to loving God, all our other relationships will seem to be a case of loving less. Jesus made this clear in related passages such as Matthew 10:37, “Anyone who loves their father or mother more than me is not worthy of me; anyone who loves their son or daughter more than me is not worthy of me.” It is not a matter of hating others, but of loving God more, so much so that all other loves may seem to be lesser.

5. This is similar to some of the “objections” dealt with above. Our complete trust and dependence should be in God and him alone. We are NOT to trust in riches and possessions, but to put our full faith in God. That does not mean we are to be careless and reckless with what God has entrusted us with. We are to be good stewards, and other teachings of Jesus such as the parable of the talents makes this perfectly clear (Matthew 25:14-30).

6. Things are now getting rather tedious here. As with the above, we are of course to be generous and giving, and that means not just with our stuff, but with our very lives. We should be willing to die for our faith, and be willing to make great sacrifices for the sake of the kingdom and for others. That of course does NOT mean we can have no possessions or private property, as I already mentioned. The Eighth and Tenth Commandments of course presuppose the right to have private property and possessions.

7. As usual, Jesus was dealing with hypocrisy which was such a hallmark of the Pharisees and Scribes. As the context clearly indicates, they loved the praise of men and loved to be seen by men. This is NOT a blanket ban on public prayers, but on men-pleasing and the Pharisaic spirit. His concern was with motivation, not location. The fact that he could pray “Our father…” implies a place for public and corporate prayer. The ostentatious and self-seeking display in public is what is being condemned here, not mere public prayer.

I mentioned above that the person who sent in this comment had sent it elsewhere. He twice sent it to someone who really is a David. I refer to Scottish pastor and writer David Robertson. He also has a website and he also was not impressed with this troll and his rather useless comment. As he replied in one of his two comments to him:

This is obviously the latest atheist meme doing the rounds – as this is the second time I’ve answered it today….It seems as though some think this is a brilliant argument – when it is really superficial and ignorant. It shows a lack of understanding of the Bible and of the context of the ‘quotes’ (in some cases misquotes) which would discredit a toddler. Can I suggest that instead of copying and pasting atheist memes you do some thinking for yourself?
theweeflea.com/2018/06/29/evangelical-moderator-honoured-for-changing-attitudes-within-the-church-to-same-sex-relationships/

Yes that is a big ask: to get these trolls to actually use their brains for a change instead of just passing around meaningless and juvenile memes. But I have written before about how we should deal with trolls. Because they are so vexatious, troublesome and dishonest, the general rule of thumb is to ignore them altogether.

We are under no obligation at all to waste time with such people. Jesus said much the same: ‘Do not cast your pearls before swine’ and ‘Do not give bread to the dogs’. Yes, those who are asking honest questions do deserve honest answers. But it often requires some solid wisdom and discernment as to who is being the real deal and who is just a malicious troll.

See here for more on how to deal with trolls: