War has been declared on everything we value. How will you respond?

Make no mistake: the secular left hates Christianity and it hates Christians. Their hatred of the West is fuelled by their hatred of what is the basis of the West: the Judeo-Christian worldview. The current round of rioting and revolution, of cities being set on fire, and mob violence erupting everywhere, is simply the latest manifestation of all this. 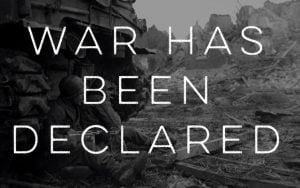 The rioting on our streets that we see today, the buildings being set on fire, and the churches and symbols of authority being attacked are just a part of this. There have always been such dark revolutionary days. Radical secular leftism and Communism have often led the way, seeking to destroy the churches in particular and whole cultures in general as they sought to sweep away everything in their path.

As a godless and messed-up teenager I was up to my ears in the revolution. I detested the West and all it stood for, and I detested things like Christianity. ‘Away with it all! Burn it all to the ground and start afresh!’ Of course, I was self-destructing as well, while trying to destroy America and the West.

Many of my friends did not make it – dying of suicide and drug overdoses. I should have been one of them. I was suicidal and I was a regular drug user. But God had other plans, and he broke into my life as a really screwed-up 18-year-old and gloriously saved me. For those who are interested, my story is found here: billmuehlenberg.com/2012/06/27/coming-home-my-testimony-part-1/

So when I see this latest round of rioting, rebellion and revolution, I know a bit about it. I have been there and done that. And as a student of history, I also see things repeating. I understand that there is nothing new under the sun. All that we see is angry, rebellious humanity lashing out at whatever is around them, with God as their final object of rage.

Indeed, Christians know that this has always been the case. From day one the very good plans and purposes of God for us have been opposed and resisted. Satan has been working 24/7 to thwart God and his intentions for mankind. Biblical history is about one thing: God’s attempts to redeem mankind through the Messiah, and Satan’s attempts to prevent that from happening at all costs. A brief overview of the biblical storyline makes this quite clear:

In these and so many other episodes that we read about in Scripture and in church history, it so often looked like Satan had gained the upper hand, but God always prevailed – often by means of a faithful remnant. But this life and death struggle continues today.

So all the chaos, carnage and craziness that we see all around us is simply a continuation of this age-old struggle between God and Satan – between God’s people and Satan’s people. The good news is, we know how it will all end. But in the meantime, the battle continues.

A very real war is upon all of us, whether we like it or not. As expressed in the second part of Tolkein’s Lord of the Rings trilogy, The Two Towers:

That pretty well sums up so much of the Christian church today. War has been declared against our faith, our families, and our freedom, yet most Christians are blissfully unaware of this – or just do not care. They really seem to think that they can just sit this one out. They really think this latest manifestation of the perennial war against Christianity will not impact them.

Tell ‘em they’re dreaming. We ALL will be impacted by this. None can escape. Just as many small business owners thought they could ignore the rioting and thought they would be OK, until their own business burned to the ground, so too we have the majority of Christians with their heads in the sand.

Some voices have been sounding the alarm for many decades now. Christian prophetic voices have acted as watchmen on the walls, but their clarion calls went unheeded, just like the prophets of old. I can think of so many relatively recent voices that sought to sound the alarm – but mostly in vain. Think of Chesterton or Fulton J. Sheen or Malcolm Muggeridge or Francis Schaeffer or A. W. Tozer or Chuck Colson or so many others.

Yet we have chosen to ignore them, pretend everything is just peachy, and naively think we can just go about our lives. Such delusion is killing us, and if we do not wake up very soon, it really will be too late. To paraphrase the famous quote from the German pastor and Holocaust survivor Martin Niemoller:

Let me close with some sobering words from an American Catholic philosopher. Melissa Moschella penned a piece some years ago entitled “A Time for Heroism”. In it she said this:

Perhaps there are times and places in the history of the world in which it is possible to go through life as just an ordinary, good person—a faithful spouse, a loving parent, a concerned citizen, a regular church-goer, an honest and industrious professional—leading a normal, quiet life, not making waves or standing out in any way. Perhaps. But the United States of America in the year 2014 is not one of those times and places. Rather, in our contemporary society, the only way to be good is to be heroic. Failing to act with heroism inevitably makes us complicit in grave evils.

Obviously this is even more true of the West in 2020. Open warfare is upon us. What will be your response? You decide – before it is too late.