We can learn much from the history of ancient Israel:

History is there to learn from. But what we are seeing with the destruction of statues and monuments by the radical secular left is a war on history. All tyrants know that by rewriting or obliterating the past they can control people now and in the future. 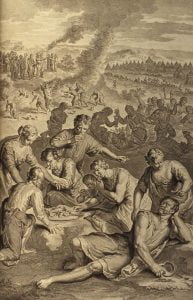 Not surprisingly the Bible has a lot to say about the value of history, and the need to learn its lessons. The Judeo-Christian worldview is grounded in history; and calls to remember, and not forget, are found throughout the Bible. As a very quick exercise, I looked up how many times the word “remember” is used in the ESV. All up in its various forms it is used 234 times.

And then the term “remembrance” is found 25 times. Another key word, “forget,” is found 62 times, while “forgot” and “forgotten” are used another 51 times. So just these few terms alone are found 372 times all up. Obviously Scripture has a lot to say about the value of memory and not forgetting the past.

One classic New Testament passage on this is 1 Corinthians 10:1-13. It mentions ancient Israel – especially in its wilderness wanderings – as an example for believers today. Paul says this in verse 11: “Now these things happened to them as an example, but they were written down for our instruction, on whom the end of the ages has come.”

So we are to learn from what has happened in the past. A people ignorant of history and the past are doomed to keep making the same mistakes and repeating the same sins. In my reading through the Psalms I find this over and over again. Consider Psalms 105 and 106, sometimes referred to as “remembrance psalms”.

Both are lengthy words of warning, reminding God’s people of all the mighty works God has performed on their behalf in the past. The wilderness wanderings again feature heavily in these Psalms. Let me examine just one short section: Psalm 106:13-15. It says this:

But they soon forgot his works;
they did not wait for his counsel.
But they had a wanton craving in the wilderness,
and put God to the test in the desert;
he gave them what they asked,
but sent a wasting disease among them.

The reference of course is to what we read about in Numbers 11. After the Exodus the Israelites were constantly complaining and rebelling against Yahweh, and he often would judge them for this, which in part explains why a relatively short trip to Canaan took 40 years.

They were not happy with God’s provision for them, as we read in verses 4-6: “Now the rabble that was among them had a strong craving. And the people of Israel also wept again and said, ‘Oh that we had meat to eat! We remember the fish we ate in Egypt that cost nothing, the cucumbers, the melons, the leeks, the onions, and the garlic. But now our strength is dried up, and there is nothing at all but this manna to look at’.”

The passage I am considering from Ps. 106 refers especially to verses 31-34:

Then a wind from the Lord sprang up, and it brought quail from the sea and let them fall beside the camp, about a day’s journey on this side and a day’s journey on the other side, around the camp, and about two cubits above the ground. And the people rose all that day and all night and all the next day, and gathered the quail. Those who gathered least gathered ten homers. And they spread them out for themselves all around the camp. While the meat was yet between their teeth, before it was consumed, the anger of the Lord was kindled against the people, and the Lord struck down the people with a very great plague. Therefore the name of that place was called Kibroth-hattaavah, because there they buried the people who had the craving.

So the people got what they demanded, but the outcome was bad news indeed. Many will recall how the KJV puts verse 15: “And he gave them their request; but sent leanness into their soul.” Since a great plague is what God sent to the rebellious people, the ESV rendering may be preferred, as with the NIV, CSB, HCSB and other translations.

The main point was about a physical disease resulting in death, but yes, such selfish demands and rejection of God’s good provision of course impoverished their souls as well. Let me offer a bit of commentary on this. First, Tucker and Grant in their NIVAC commentary speak to the broader issue of history and memory:

The three classic examples of historical psalms are Psalms 78, 105, and 106. Psalm 78 is a lengthy account of the people’s rebellions that ends with a note of hope rooted in the worship of the temple and in a future king like David. Psalm 105 focuses on the great faithfulness of God in calling a people to himself and establishing them as a nation. Psalm 106, as we see above, focuses on the covenantal faithlessness of the people despite repeated grace, forgiveness, and restoration from Yahweh.

Tremper Longman says this about the importance of history and remembrance in the two psalms. Discussing Psalm 105 he writes: “Remembrance psalms invite Christians to look to the past in order to see God’s great acts. Of course, we have an even longer history to contemplate and one that climaxes in the death, resurrection and ascension of Jesus Christ.”

And on Psalm 106 he makes this important point:

The wilderness period was a time of one rebellion after another, with God punishing the people for their lack of faith. Although God had performed great acts of deliverance on Israel’s behalf, they forgot what he had done. As remembrance signifies more than an act of mental recall in the Hebrew Bible, so the act of forgetting means to ignore God. The people constantly tested God, and he sent disease among them as a punishment (see Num. 11:33-34).

He says this about Israel’s sins in the desert: “Rebellion, the sin identified with the people’s exodus from Egypt, is a root sin that lies at the heart of the other sins of Israel. Still each sin is worth remembering separately, which is what the psalmist does at this point. He remembers six sins associated with Israel’s years of wandering in the wilderness…” They are, in outline form:

Boice then offers us this encouragement:

If Israel’s history is one long litany of sin followed by God’s just chastisement, as it is, why should Israel or anyone else “praise the LORD”? The answer is given immediately. It is because God “is good,” because “his love endures forever” (v. 1). The people had sinned repeatedly, and God had disciplined them repeatedly. But he did not cast them off, as they deserved. Instead “he remembered his covenant” (v. 45) and restored them. Thus Israel’s history is as much the story of God’s mercy, faithfulness and longsuffering, as it is the story of Israel’s faithlessness and unbelief. In fact, it is against the background of their sin that God’s patience is most fully illuminated.

Isn’t that your story, too?

Yes that is terrific news indeed. We Christians are no different than ancient Israel. Its story is our story. We too keep sinning, rebelling and failing to remember. Yet God in his grace forgives and shows mercy, when we come to him and confess our sins. Praise God for what Christ has done for us.

In closing, many of you will recall the humourous but didactic 1980 song by Keith Green, “So You Wanna Go Back to Egypt”. The lyrics are as follows:

Eating leaks and onions by the Nile
Ooh what breath for dining out in style
Ooh, my life’s on the skids
Building the pyramids

Well we once complained for something new to munch
The ground opened up and had some of us for lunch
Ooh, such fire and smoke
Can’t God even take a joke? Huh? NO!

So you wanna to back to Egypt
Where your friends wait for you
You can throw a big party and tell the whole gang
Of what they said was all true
And this Moses acts like a big shot
Who does he think he is?
Well it’s true that God works lots of miracles
But Moses thinks they’re all his

Oh, Moses, put down your pen!
What? Oh no, manna again?

You can listen to it here: www.youtube.com/watch?v=o_No9sI69oQ

6 Replies to “Be Careful What You Ask For”