To love the truth is to hate the lies:

I have often written about the importance of truth, and how Christians especially must love the truth. All those who claim to follow Christ will of course love God, and since God is true, they should all have a love for the truth. The two go together of course.

There is a flip side to all this, however. To love God means not just to love the truth but to abhor lies. Hating lies and deception is as much a part of the Christian’s call to love God as is the call to love, serve and promote the truth. Indeed, one cannot affirm and promote truth without at the same time standing against lies and falsehoods. 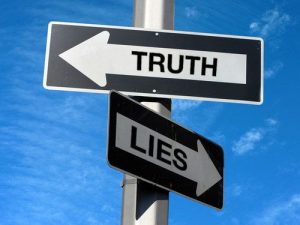 But we live in an age in which to affirm truth suggests we are narrow-minded, bigoted, judgmental and unloving. All the more reason to stand for truth and oppose falsehood. Let them call us what they want. We must be people of truth, and that means we must be people who resist lies.

And lies are all around us. Indeed, our culture celebrates, endorses and promotes lies while attacking and denigrating the truth. Consider just some of the things that are perfectly true that our PC culture goes ballistic over and claims are examples of hate speech:

Many more items can be added to that list. But our secular left culture is reversing everything, turning truth into lies, and lies into truth. It is the same as the prophet Isaiah warned about 2 ½ millennia ago: “Woe to those who call evil good and good evil, who put darkness for light and light for darkness, who put bitter for sweet and sweet for bitter” (Isaiah 5:20).

Thus today we are expected to lie as a matter of course:

-We are expected to believe, and to say, that biological sex means nothing, and a guy putting on a dress is a woman. That is a lie and we should have no part of it.

-We are expected to believe, and to say, that marriage can be between any people of any gender and of number. That is a lie and we should have no part of it.

-We are expected to believe, and to say, that Western culture has only always been evil, based on racism, oppression and hatred. That is a lie and we should have no part of it.

-We are expected to believe, and to say, that being white is inherently evil, a sign of unfair privilege, and something to be repented of. That is a lie and we should have no part of it.

-We are expected to believe, and to say, that killing babies in the womb is a woman’s right to choose, and is no different than clipping one’s fingernails. That is a lie and we should have no part of it.

-We are expected to believe, and to say, that Christianity is a bigoted and hate-filled religion that is the source of all our woes. That is a lie and we should have no part of it.

-We are expected to believe, and to say, that socialism is the ideal political and economic system, and one that Jesus supports. That is a lie and we should have no part of it.

You get the drift. We have made an artform out of turning lies into truth. And we are demanding of people that they embrace these lies as if they were truth. And we are now routinely punishing people who speak the truth and refuse to run with lies and falsehoods.

This is a very scary place to be in my friends. No society will last long when it wars against truth and seeks to build a culture on a foundation of lies. Indeed, just as no individual will thrive and survive when living in a web of lies, so too entire nations. Christians must affirm truth while exposing lies. That is our biblical responsibility.

In previous articles I have listed the many passages which speak to the importance of truth, the need for truth, and why we must share the truth and live by the truth. But there are also many biblical passages that warn against lies and falsehoods, and how we must abhor them. Let me offer just some of the key texts on this:

Proverbs 13:5 The righteous hates falsehood,
but the wicked brings shame and disgrace.

Proverbs 12:22 Lying lips are an abomination to the Lord,
But those who deal truthfully are His delight.

Psalm 52:3 You love evil more than good,
and lying more than speaking what is right.

Ezekiel 13:8 Therefore thus says the Lord God: “Because you have uttered falsehood and seen lying visions, therefore behold, I am against you, declares the Lord God.”

Proverbs 6:16-19 There are six things that the Lord hates,
seven that are an abomination to him:
haughty eyes, a lying tongue,
and hands that shed innocent blood,
a heart that devises wicked plans,
feet that make haste to run to evil,
a false witness who breathes out lies,
and one who sows discord among brothers.

Proverbs 12:19 Truthful lips endure forever,
but a lying tongue is but for a moment.

Notice how often we have these opposites paired together: to love truth is to hate falsehood; to speak truth is to refrain from lies; and so on. They go together, and the Christian is one who is equally passionate about affirming truth as he is about renouncing error.

To state truth means to renounce its opposite. As Charles Spurgeon once rightly stated, “He who does not hate the false does not love the true.” Christians must be people of truth. And that means we must not be cavalier and unconcerned about falsehood. We should hate lies as much as we love the truth.

To conclude, various writers and thinkers could be called upon here, but we can seldom do better than appealing to the great G. K. Chesterton. A few of his quotes will suffice here:

“We shall soon be in a world in which a man may be howled down for saying that two and two make four, in which people will persecute the heresy of calling a triangle a three-sided figure, and hang a man for maddening a mob with the news that grass is green.”

“Great truths can only be forgotten and can never be falsified.”

“The whole truth is generally the ally of virtue; a half-truth is always the ally of some vice.”

“Truth is sacred; and if you tell the truth too often nobody will believe it.”

“It is easy to be a madman: it is easy to be a heretic. It is always easy to let the age have its head; the difficult thing is to keep one’s own. It is always easy to be a modernist; as it is easy to be a snob. To have fallen into any of those open traps of error and exaggeration which fashion after fashion and sect after sect set along the historic path of Christendom – that would indeed have been simple. It is always simple to fall; there are an infinity of angles at which one falls, only one at which one stands. To have fallen into any one of the fads from Gnosticism to Christian Science would indeed have been obvious and tame. But to have avoided them all has been one whirling adventure; and in my vision the heavenly chariot flies thundering through the ages, the dull heresies sprawling and prostrate, the wild truth reeling but erect.”

“What we suffer from today is humility in the wrong place. Modesty has moved from the organ of ambition. Modesty has settled upon the organ of conviction; where it was never meant to be. A man was meant to be doubtful about himself, but undoubting about the truth; this has been exactly reversed. Nowadays the part of a man that a man does assert is exactly the part he ought not to assert–himself. The part he doubts is exactly the part he ought not to doubt – the Divine Reason. . . . The new skeptic is so humble that he doubts if he can even learn. . . . There is a real humility typical of our time; but it so happens that it’s practically a more poisonous humility than the wildest prostrations of the ascetic. . . . The old humility made a man doubtful about his efforts, which might make him work harder. But the new humility makes a man doubtful about his aims, which makes him stop working altogether. . . . We are on the road to producing a race of man too mentally modest to believe in the multiplication table.”