Real Christianity has always been about transforming our world – not just individual souls:

Christianity is a very practical faith. It of course offers eternal dividends for those who embrace it, but it also has very real implications for life on this earth. It is not just about pie in the sky in the sweet bye and bye, but about positive and lasting significance and change in this world as well. 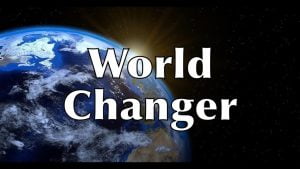 Although it obviously has a major focus on what lies ahead, Christianity is in many respects the most ‘this-worldly’ of all the major religions. It is not about pulling out of this world, sitting back, watching as things go down the tubes, and simply awaiting the next.

Instead, Christians are to be salt and light right now wherever they find themselves. They are to apply their faith to the whole of life. As such, we seek not just to get individual souls saved and going to heaven, but to have a transformative impact on the world around us.

And that has always been the case. As we read in Acts 17:6 (KJV), the early church “turned the world upside down.” And it has been doing so ever since. Wherever Christians went, social and culture improvements took place. Christians not only evangelised, but they established hospitals, set up schools, engaged in various acts of social reform, helped to raise the status of women and children, and so on.

The whole person in the whole world was ministered to, not just the soul. As the late Christian apologist Norman Geisler once put it:

What sometimes escapes Christians is the fact that the responsibility to love other persons extends to the whole person. That is, man is more than a soul destined for another world; he is also a body living in this world. And as a resident of this time-space continuum man has physical and social needs which cannot be isolated from spiritual needs. Hence, in order to love man as he is – the whole man – one must exercise a concern about his social needs as well as his spiritual needs.

But sadly not all Christians seem to get this. Let me here turn to a humorous episode, then return to the serious. Yesterday on the social media I shared a meme with these words: “I’m a Victorian… Get Me Out of Here!” It is based on an Australian television show, “I’m a Celebrity… Get Me Out of Here!” and it refers to the horrific situation Victorians find themselves in under the most draconian and irrational lockdown in the Western world.

A friend humorously replied: “If it’s deliverance you want…I know a guy…the greatest guy to ever walk the earth.” I then replied, “Yes I already have that deliverance thanks – but I can use some deliverance from an out of control dictatorship that is causing massive damage here.”

While he knew where I was coming from, and I him, sadly there would be many believers who do think like that – and in all seriousness. They are dismissive of any attempts to make things better in this life, and have their eyes only on the next life.

They have an overly-spiritualised Christianity, one that sounds really devout and spiritual, but is far from biblical. These folks really do look down on Christians who take their responsibilities seriously as citizens of two kingdoms. They think that any political and social involvement on our part is a waste of time or is outside of our calling as Christians.

As but one example, there were some Christians who felt that the abolition crusade of English Christian Parliamentarian William Wilberforce was a waste of energy, and that he should not worry about Blacks being in chains, because what they really needed was spiritual freedom. Needless to say, Wilberforce fully rejected such bogus advice.

He dealt with the whole person. Yes, he shared the good news about forgiveness of sins through the work of Christ at Calvary, but he also worked to show practical love for others, not just in his work on slavery, but in so many other areas as well.

Let me close with a few quotes from a recent book on the influence of Christianity written by someone who does not even claim to be an evangelical Christian. As a careful historian, Tom Holland has penned a superb volume looking at how the West would be unrecognisable were it not for Christianity.

Indeed, there might be no West if it were not for this one man and his dedicated followers. In his important book Dominion, released last year, he says this early on: “How was it that a cult inspired by the execution of an obscure criminal in a long-vanished empire came to exercise such a transformative and enduring influence on the world?”

He speaks of what he is attempting to do in his 600-page book: “My ambition is hubristic enough as it is: to explore how we in the West came to be what we are, and to think the way that we do. . . . Already, by the time that Anselm died in 1109, Latin Christendom had been set upon a course so distinctive that what today we term ‘the West’ is less its heir than its continuation.”

Today, at a time of seismic geopolitical realignment, when our values are proving to be not nearly as universal as some of us had assumed them to be, the need to recognize just how culturally contingent they are is more pressing than ever. To live in a Western country is to live in a society still utterly saturated by Christian concepts and assumptions. This is no less true for Jews or Muslims than it is for Catholics or Protestants. Two thousand years on from the birth of Christ, it does not require a belief that He rose from the dead to be stamped by the formidable – indeed the inescapable – influence of Christianity. Whether it be the conviction that the workings of conscience are the surest determinants of good law, or that Church and state exist as distinct entities, or that polygamy is unacceptable, its trace elements are to be found everywhere in the West. Even to write about it in a Western language is to use words shot through with Christian connotations. “Religion,” “secular,” “atheist”: none of these are neutral. All, though they derive from the classical past, come freighted with the legacy of Christendom. Fail to appreciate this, and the risk is always of anachronism. The West, increasingly empty though the pews may be, remains firmly moored to its Christian past.

“Christianity,” he writes, “may be the most enduring and influential legacy of the ancient world, and its emergence the single most transformative development in Western history” Absolutely. Let me offer one more quote – this time from his closing chapter:

To be a Christian is to believe that God became man, and suffered a death as terrible as any mortal has ever suffered. This is why the cross, that ancient implement of torture, remains what it has always been: the fitting symbol of the Christian revolution. It is the audacity of it—the audacity of finding in a twisted and defeated corpse the glory of the creator of the universe—that serves to explain, more surely than anything else, the sheer strangeness of Christianity, and of the civilisation to which it gave birth. Today, the power of this strangeness remains as alive as it has ever been.

Yes, the faith remains, 2000 years on. And that for at least two reasons: one, because it happens to be true, and two, because Christians took their faith seriously and applied it to all of life. They saw their faith as something that spoke to the whole person and to all of society. As a result, they really did change the world.

There are many books that deal with the Christian basis of the West, the Influence of Christianity, and all the good that the Christian faith has done over the centuries. Here are 15 of the best of them:

Carroll, Vincent and David Shiflett, Christianity on Trial. Encounter Books, 2002.
D’Sousa, Dinesh, What’s So Great About Christianity? Regnery, 2007.
Hill, Jonathan, What Has Christianity Ever Done For Us? IVP, 2005.
Holland, Tom, Dominion: The Making of the Western Mind. Little, Brown, 2019.
Johnston, Jeremiah, Unimaginable: What Our World Would Be Like Without Christianity. Bethany House, 2017.
Kennedy, D. James, What if the Bible Had Never Been Written? Thomas Nelson, 1998.
Kennedy, D. James, What if Jesus Had Never Been Born? Thomas Nelson, 1994.
Mangalwadi, Vishal, The Book That Made Your World. Thomas Nelson, 2011.
Mangalwadi, Vishal, This Book Changed Everything. Vol. 1: The Bible’s Amazing Impact on Our World. SoughtAfterMedia, 2019.
Scott, Otto, The Great Christian Revolution: How Christianity Transformed the World. The Reformer Library, 1994.
Schmidt, Alvin, Under the Influence. Zondervan, 2001 (reissued as How Christianity Changed the World. Zondervan, 2004.)
Sheridan, Greg, God is Good For You: A Defence of Christianity in Troubled Times. Allen & Unwin, 2018.
Spencer, Nick, The Evolution of the West: How Christianity Has Shaped Our Values. SPCK, 2016.
Stark, Rodney, For the Glory of God. Princeton University Press, 2003.
Stark, Rodney, The Victory of Reason: How Christianity Led to Freedom, Capitalism and Western Success. Random House, 2005.

11 Replies to “A Faith That Makes a Difference”