Chesterton and Lewis on liberty and tyranny:

Now, more than ever, with freedom and democracy teetering on the brink in so many places – especially here in the state of Victoria at the moment – we need to once again affirm liberty and human rights, and reject creeping totalitarianism, despotism and dictatorship. We can do this in part by recalling what others have said on such matters. 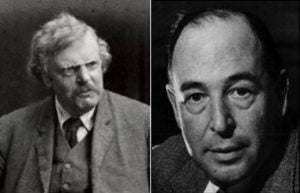 Many great thinkers and writers of the past could be appealed to here, but two of my all-time favourites will suffice: C. S. Lewis and G. K. Chesterton. Both had much to say about these topics. Chesterton the poet, author and newspaper columnist perhaps wrote much more than Lewis did on political matters and current events – so you will find more quotes from him featured here.

Lewis, the professor of English literature and Christian apologist did nonetheless manage to say various things about these topics as well. So let me begin with some quotes from him, and then move on to Chesterton. I have all the sources for the Lewis material, so I will offer the general reference after each quote. But not having all the specific references for the Chesterton quotes, I will just offer them without the citations.

“I am a democrat because I believe in the Fall of Man. . . . Mankind is so fallen that no man can be trusted with unchecked power over his fellows. Aristotle said that some people were only fit to be slaves. I do not contradict him. But I reject slavery because I see no men fit to be masters.” –Present Concerns

“Of all tyrannies, a tyranny sincerely exercised for the good of its victims may be the most oppressive. It would be better to live under robber barons than under omnipotent moral busybodies. The robber baron’s cruelty may sometimes sleep, his cupidity may at some point be satiated; but those who torment us for our own good will torment us without end for they do so with the approval of their own conscience.” -“The Humanitarian Theory of Punishment,” in God in the Dock

“We are all at this moment helping to decide whether humanity shall retain all that has hitherto made humanity worth preserving, or whether we must slide down into the sub-humanity imagined by Mr Aldous Huxley and George Orwell and partially realised in Hitler’s Germany. For the extermination of the Jews really would have been ‘useful’ if the racial theories had been correct; there is no foretelling what may come to seem, or even to be, ‘useful’, and ‘necessity’ was always ‘the tyrant’s plea’.” -“The Humanitarian Theory of Punishment,” in God in the Dock

“I believe in political equality. But there are two opposite reasons for being a democrat. You may think all men so good that they deserve a share in the government of the commonwealth, and so wise that the commonwealth needs their advice. That is, in my opinion, the false, romantic doctrine of democracy. On the other hand, you may believe fallen men to be so wicked that not one of them can be trusted with any irresponsible power over his fellows. That I believe to be the true ground of democracy. I do not believe that God created an egalitarian world. . . . [S]ince we have sin, we have found, as Lord Acton says, that ‘all power corrupts, and absolute power corrupts absolutely.’ The only remedy has been to take away the powers and substitute a legal fiction of equality. . . . Theocracy has been rightly abolished not because it is bad that priests should govern ignorant laymen, but because priests are wicked men like the rest of us.” -“Membership,” in The Weight of Glory

“Sameness is to be found most among the most ‘natural’ men, not among those who surrender to Christ. How monotonously alike all the great tyrants and conquerers have been; how gloriously different are the saints. But there must be a real giving up of the self. You must throw it away ‘blindly’ so to speak.” –Mere Christianity

“The wisest thing in the world is to cry out before you are hurt. It is no good to cry out after you are hurt; especially after you are mortally hurt. People talk about the impatience of the populace; but sound historians know that most tyrannies have been possible because men moved too late. It is often essential to resist a tyranny before it exists.”

“A tired democracy becomes a dictatorship.”

“If there is one fact we really can prove, from the history that we really do know, it is that despotism can be a development, often a late development and very often indeed the end of societies that have been highly democratic. A despotism may almost be defined as a tired democracy. As fatigue falls on a community, the citizens are less inclined for that eternal vigilance which has truly been called the price of liberty; and they prefer to arm only one single sentinel to watch the city while they sleep.”

“Once abolish the God, and the government becomes the God.”

“Liberty is traditional and conservative; it remembers its legends and its heroes. But tyranny is always young and seemingly innocent, and asks us to forget the past.”

“You do not know a tyranny until it is on top of you; until it has you in a trap. The tyrant is not present until he is omnipresent.”

“What’s worthwhile to point out, first and last, is that Socialism is a tyranny; that it is inevitably, even avowedly and almost justifiably, a tyranny. It’s the pretense that government can prevent all injustice by being directly responsible for practically anything that happens.”

“This is the essential mark of tyranny: that it is always new. Tyranny always enters by the unguarded gate. The tyrant is always shy and unobtrusive. The tyrant is always a traitor. He has always come there on the pretence that he was protecting something which the people really wanted protected — religion, or public justice, or patriotic glory.”

“Those of us who study the papers and the parliamentary speeches with proper attention must have by this time a fairly precise idea of the nature of the evil of Socialism. It is a remote Utopian dream impossible of fulfilment and also an overwhelming practical danger that threatens us at every moment.”

“There is not really any courage at all in attacking hoary or antiquated things, any more than in offering to fight one’s grandmother. The really courageous man is he who defies tyrannies young as the morning and superstitions fresh as the first flowers. The only true free-thinker is he whose intellect is as much free from the future as from the past.”

More quotes on these subjects could be offered by these two intellectual and literary giants – especially by Chesterton. But hopefully these nuggets will do two things at least: spur you on to read (or reread) these two fantastic authors, and help you to further appreciate freedom and democracy in an age where both seem to be fast slipping from our grasp.