Anger is part of the biblical presentation of Jesus:

Was Jesus ever angry? If so, what angered him? Those questions will be answered differently, depending on where a person is at. Some of those who are part of the trendy religious left will often want to play down any notion of Jesus being angry, and will run with an image of Jesus as a tree-hugging hippy who smiled a lot, tolerated everything, and was nice to everyone.

The biblical picture of course is quite different. But before turning to the New Testament data on this, one very obvious point should be made: God never changes, and Jesus is God. So what we read about God the Father – in either Testament – is fully true of God the Son. If we find God getting angry (and we do, repeatedly), then it is certain that Jesus gets angry. 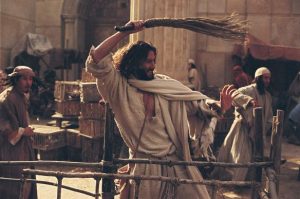 The passages speaking about the wrath or anger of God are found throughout Scripture, and I have often penned articles mentioning some of them. See here for example: billmuehlenberg.com/2020/05/19/on-the-wrath-of-god/

There are simply so many passages on this. As James Montgomery Boice says concerning the Hebrew Scriptures: “In the Old Testament more than 20 words are used to refer to God’s wrath. There are nearly 600 important passages on the subject. They are basic and are integrated with the most important themes and events in Scripture.”

Let me share a few of them. Simply running with the ESV, and the word translated “anger” in English, we find plenty of such verses. Here is a very small sampling of them:

Exodus 4:14 Then the anger of the Lord was kindled against Moses and he said, “Is there not Aaron, your brother, the Levite?

Numbers 11:1 And the people complained in the hearing of the Lord about their misfortunes, and when the Lord heard it, his anger was kindled, and the fire of the Lord burned among them and consumed some outlying parts of the camp.

Deuteronomy 29:27 Therefore the anger of the Lord was kindled against this land, bringing upon it all the curses written in this book,

1 Kings 16:33 And Ahab made an Asherah. Ahab did more to provoke the Lord, the God of Israel, to anger than all the kings of Israel who were before him.

Psalm 78:49 He let loose on them his burning anger, wrath, indignation, and distress, a company of destroying angels.

Isaiah 63:6 I trampled down the peoples in my anger; I made them drunk in my wrath, and I poured out their lifeblood on the earth.”

Habakkuk 3:12 You marched through the earth in fury; you threshed the nations in anger.

But critics will say that we do really find Jesus getting angry in the gospel accounts. While it is true that we do not see this happening often, we certainly do find it there. Just this morning as I was again reading through Mark, I found a clear example of this.

As it says in Mark 3:5, “And he looked around at them with anger, grieved at their hardness of heart, and said to the man, ‘Stretch out your hand.’ He stretched it out, and his hand was restored.” Clearly unbelief and hardened hearts are among those things that angered Jesus.

So too was the corruption of temple worship. Forming a whip and flipping over tables is hardly the stuff of a laid-back and happy attitude. His anger was on full display there, as we read in John 2:13-17:

The Passover of the Jews was at hand, and Jesus went up to Jerusalem. In the temple he found those who were selling oxen and sheep and pigeons, and the money-changers sitting there. And making a whip of cords, he drove them all out of the temple, with the sheep and oxen. And he poured out the coins of the money-changers and overturned their tables. And he told those who sold the pigeons, “Take these things away; do not make my Father’s house a house of trade.” His disciples remembered that it was written, “Zeal for your house will consume me.”

It seems that this episode, done early on in his earthly ministry, can be distinguished from a second cleansing of the temple, associated with the later stages of his ministry (see Matthew 21:12-13; Mark 11:15–17; Luke 19:45–46). If so, we have this occurring more than once, although only John mentions the forming of the whip.

Of course one senses the anger Jesus had as he proclaims woes on the Scribes and Pharisees (eg., Matthew 23 and Luke 11:37–54). It is not just in rebuking these religious rulers, but in other rebukes that we find Jesus clearly upset, for example when he rebuked Peter in Mark 8:31–33.

And as many New Testament scholars have noted, the words found at the end of John 11:33 (“When Jesus saw her weeping, and the Jews who had come with her also weeping, he was deeply moved in his spirit and greatly troubled”) indicate his rage and anger at sin and its outcome, death. See more on this here: billmuehlenberg.com/2010/03/01/jesus-meek-and-mild-or-conquering-king/

Other texts could be mentioned, including some of the parables Jesus told where it is clear that the one representing God gets angry, such as in the Parable of the Unforgiving Servant found in Matthew 18:21-35. As we read in the final two verses: “And in anger his master delivered him to the jailers, until he should pay all his debt. So also my heavenly Father will do to every one of you, if you do not forgive your brother from your heart.”

Two concluding things can be said about all this. One, clearly Jesus is not some jolly butler who exists simply to make us happy and comfortable and to do our every bidding. He challenges us and confronts us, demanding that we turn from our sin and selfishness and follow him in holiness and righteousness. He wants us to love what he loves and hate what he hates – and some righteous indignation and anger are a part of this. See here for more on this: billmuehlenberg.com/2020/06/21/anger-prayer-and-the-justice-of-god/

Second, we most certainly do rejoice that our Lord is also compassionate, gracious, slow to anger, and ready to forgive. It is the whole picture of God that we need to run with. We need to embrace and affirm a Jesus who fully hates sin, but is fully willing to show mercy to the repentant.

I conclude with a few quotes on these matters. John Stott in his superb volume The Cross of Christ puts it this way:

God’s anger is absolutely pure, and uncontaminated by those elements which render human anger sinful. Human anger is usually arbitrary and uninhibited; divine anger is always principled and controlled. Our anger tends to be a spasmodic outburst, aroused by pique and seeking revenge; God’s is a continuous, settled antagonism, aroused only by evil, and expressed in its condemnation. God is entirely free from personal animosity or vindictiveness; indeed, he is sustained simultaneously with undiminished love for the offender.

Martyn Lloyd-Jones commenting on Ephesians 2 ties together the anger and love of God:

Finally, J. C. Ryle reminds us of what sort of deity we should be proclaiming:

Beware of manufacturing a God of your own: a God who is all mercy, but not just; a God who is all love, but not holy; a God who has a heaven for everybody, but a hell for none; a God who can allow good and bad to be side by side in time, but will make no distinction between good and bad in eternity. Such a God is an idol of your own, as truly an idol as any snake or crocodile in an Egyptian temple. The hands of your own fancy and sentimentality have made him. He is not the God of the Bible, and beside the God of the Bible, there is no God at all.

7 Replies to “Yes, Jesus Got Angry”