God is in the transformation business. And so often in the past 2000 years we have seen those who hated God and Jesus with a passion experience an amazing transformation, and become key proponents of Christ and the gospel. That should encourage us all as we see the darkness gathering over a post-Christian West. 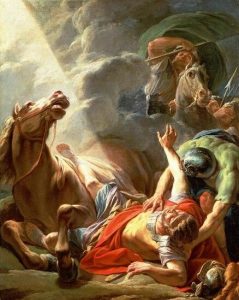 While we daily see folks attacking the Christian faith and attacking Christians, not all of them will continue to do so. That is why, in part, we pray for our enemies and for those who persecute us. You never know, God may well be at work in their lives, and the ones hating on you today might become a brother or sister in Christ tomorrow.

Sure, not all will come around. Some will oppose you, make life miserable for you, and do all they can to wear you down and shut you up. That is the promise of the gospel: we WILL be persecuted. We WILL be hated. We WILL be resisted.

But the good news is that sometimes the worst persecutors of the church become the greatest defenders of the Christian faith. The biblical story of Saul/Paul is a classic case in point. In Acts 7 we read about the stoning of Stephen, and in 8:1-3 we read about how Saul ravaged the church:

And Saul approved of his execution. And there arose on that day a great persecution against the church in Jerusalem, and they were all scattered throughout the regions of Judea and Samaria, except the apostles. Devout men buried Stephen and made great lamentation over him. But Saul was ravaging the church, and entering house after house, he dragged off men and women and committed them to prison.

He was a nasty piece of work. And the disciples were fully aware of what was facing them. Their Lord was hated, ridiculed and opposed, and eventually crucified. Jesus had warned them that they too would be hated and rejected. And it was already happening. In Acts 4 Peter and John were dragged before the council.

And in Acts 5 the apostles were arrested and imprisoned. And now they learn of this hardcore Saul who was intent on wiping them out. Could things get much worse? They were likely praying for him and the others persecuting them, as per the Lord’s instruction (Matthew 5:44).

I myself was convinced that I ought to do many things in opposing the name of Jesus of Nazareth. And I did so in Jerusalem. I not only locked up many of the saints in prison after receiving authority from the chief priests, but when they were put to death I cast my vote against them. And I punished them often in all the synagogues and tried to make them blaspheme, and in raging fury against them I persecuted them even to foreign cities.

No wonder so many were sceptical about his conversion – at least at first. It was certainly one of the great conversions in Christian history. But there have been millions more of course. And many of us would have experienced the “raging fury” of those fully opposed to the gospel.

Sure, not everyone was or is an active persecutor of Christians, but all were hostile to God while dead in their trespasses and sins. Some did seek to fully silence believers, including jailing or killing them. Others just sought to silence them intellectually or in the public square.

Let me offer an example of each. The first group would include many who were once devout Muslims. They hated Christianity and did what they could to promote Islam while warring against Christianity. Many such stories can be presented here. Let me offer just one.

I have discussed the amazing story of Daniel Shayesteh before, so let me just quote my review of his 2009 autobiography:

This is the powerful and inspiring story of an Iranian who went from being a committed Muslim revolutionary to a passionate follower of Jesus. It is a most compelling look at the real nature of Islam, and how the grace of God in Christ can radically transform a life.

Shayesteh, who now lives in the West, spent the first three decades of his life in Iran. He was able to recite the Koran from memory at age nine. As a devout Muslim, he grew up learning to hate Jews and Christians. The Koran calls them unclean, and his life was one of total ignorance as to other religious beliefs.

Although he could read and recite the Koran in Arabic, he had no idea what it meant. He simply believed what his religious instructors taught him. And he knew that to even dare to question the authority of the Koran meant death. While at a university in Tehran he became heavily involved in the Iranian revolution. He even married a woman because she too was a committed revolutionary. He organised and led many into joining the revolutionary Islamist cause….

When Shayesteh learned that he had been betrayed by Khomeini and his cronies, he sought to help correct the situation, even hoping to run as an independent political candidate. But opposition political parties were not allowed under the Islamic dictatorship, and Shayesteh soon found himself languishing in prison.

He endured months of torture and barbarism, and he was sentenced to death. But through some miraculous events, he managed to get out of prison, and return to his homeland in the north. But various attempts by the authorities to take his life made it clear that he had to flee the country with his family. Through another series of miraculous events he was finally able to make it into Turkey. It was while he was there that his conversion to Christianity occurred.

You can read the full story of his amazing conversion and new life as a Christian apologist here: billmuehlenberg.com/2009/06/26/a-review-of-islam-the-house-i-left-behind-by-daniel-shayesteh/

There would be many I could feature concerning my second group of unbelievers: those who have waged intellectual war against the faith. Let me run with one of the most famous atheists from last century. Although he died while perhaps just a theist, as opposed to being a full-fledged Christian, the story of his turnaround also deserves a wide hearing.

I refer to English philosopher and atheist Antony Flew. He also wrote an autobiography which I did a review of, so let me again just offer some brief passages from that.

In 2004 the atheist world was rocked by the news of one of the most important defections from its ranks in recent times. The world’s leading atheist, Antony Flew, announced that he was no longer an atheist, but a theist. This of course sent shock waves through the anti-theist camp, since they had long been claiming that rational and reasonable people only choose unbelief, whereas believers can only be regarded as stupid, gullible and deluded. It is pretty hard to describe Antony Flew in those terms.

Indeed, given his credentials, this is an amazing book about an amazing intellectual about-face. For over 50 years Flew was the number one proponent of atheism. And as a world class scholar with over 30 books on philosophy in print, he was one of the twentieth century’s most imposing intellectual figures. In this book we hear about the reasons why he has abandoned atheism and embraced its counterpart….

He offers three main reasons for his defection, (or apostasy, as many fellow atheists regard his move). The first bit of evidence he cites is the fact that nature obeys rational and ordered laws. The second is the fact that we are intelligently organised and purpose-driven beings. The third is the very existence of nature itself. The brute evidence of nature, in other words, has led Flew to recognise that “the universe was brought into existence by an infinite Intelligence”.

He expands these three points in some detail, and demonstrates how any open-minded examination of recent scientific discoveries can only point in one direction: that matter alone is not all there is, and a supreme intelligence must be directing what we observe in nature….

He does inform us however that if he were to embrace a revelational religion, Christianity would be the best choice. Indeed, he finds the arguments for Christianity persuasive, and is now exploring the evidence for this as well. He is even impressed with the central truth claim of Christianity, the resurrection of Jesus. In fact, he allows New Testament scholar N.T. Wright to have a concluding chapter in this book, making the case for the resurrection. billmuehlenberg.com/2007/11/21/a-review-of-there-is-a-god-by-antony-flew/

As mentioned, millions more such stories could be provided as proof that so often those who were the most opposed to the Christian faith end up laying down their arms and become key proponents of it. Some like Shayesteh are still actively involved in Christian ministry. See his site here: www.exodusfromdarkness.org/

Others like Flew have passed on. Whether he became a Christian in the end is not clear. But God is indeed in the change business, and so many who have hated God and his people have gone on to become the greatest lovers of God and his people.

So keep praying – especially if you have those in your life who are intent on resisting you, attacking you, and making life hell for you, all because of your commitment to Jesus Christ. Some of them one day may join you in the eternal worship of our risen Lord.