The apostates are becoming ever bolder – and dangerous:

Here’s the scoop: Apostasy is a real thing. So are apostates. They exist, they are dangerous, and they are deadly. There is also a predictable track they will follow: first they deny some basics of the Christian faith; then they will promote some clearly anti-Christian agenda items; and finally they will fully turn against the faith as they hate on believers. 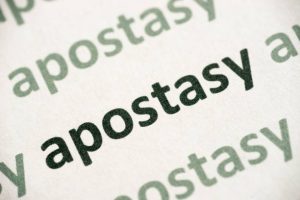 We see this happening all too often in church history. And one such person I have sadly had to write about over the years is a good case in point. I refer to the former English evangelical leader Steve Chalke. For years now he has denied or rubbished key Christian teachings, and on top of that, he has been pushing things like homosexuality. And now he is using his radicalism to go after biblical Christians.

The progression – or regression – is just what we would expect when people say no to Christ and Scripture and side with the secular left and its crusades. And the shocking thing is so many Christians are quite clueless about all this. Indeed, once when I was speaking interstate, I learned that my home church actually had him there as the main speaker! I quickly notified the head pastor about his dubious Christian credentials.

His aberrant views on the atonement for example had been quite well known for some time. As I wrote in a 2009 piece, his views are certainly at odds with historic Christianity. As I said then: “Consider English emergent church leader Steve Chalke, who was recently here in Australia. He is renowned for his 2004 book, The Lost Message of Jesus, in which he strongly condemned the penal, substitutionary understanding of the atonement, regarding it as ‘cosmic child abuse’.” billmuehlenberg.com/2009/01/25/on-the-atonement/

Of course simply being a key player in the trendy emerging church movement should have set warning bells off. I have written a number of pieces looking at how very harmful and deceptive this outfit is. See here for example: billmuehlenberg.com/2008/10/31/959/

The Word of God is not all that important to the emergents, and we cannot even know whether it is true anyway. So let’s just concentrate on getting along, being really inclusive and tolerant, and accepting everyone just as they are. Let’s forget about all this ‘sin’ nonsense and let’s just focus on being really nice and accepting of everyone and everything.

So Chalke, like so many other theological revisionists who no longer embrace the Bible, have simply made things up as they go along. After all, if the Word of God is not authoritative and conclusive on important moral issues, then we just wing it. billmuehlenberg.com/2013/01/19/no-surprises-here-from-the-emergents/

But being in favour of what the Bible is not in favour of usually is not the end of things for these apostates. Soon enough they actually turn against Christians and Christianity, and actually support the persecution of them. And that is just what we find Chalke now up to: he is supporting cracking down on churches that fail to push the homosexual agenda.

As one article says about this:

Former evangelical Steve Chalke has claimed that churches could soon face prosecution over their treatment of LGBT people.  He tweeted over the weekend: “When I began to welcome LGBT people into my church, the Evangelicals threw the charity I founded out of their alliance. But I believe what amounts to the abuse of LGBT people by churches is likely to soon see a crop of high-profile prosecutions.”

His tweet was in reference to the Evangelical Alliance, which in 2014 discontinued membership of the Oasis Trust, the charity founded by Chalke, after he came out in support of same-sex relationships. Since announcing his change of view on sexuality, Chalke has become an outspoken advocate for LGBT people.

Chalke made his latest comments ahead of a conference he was hosting on Saturday about creating “safe” churches for LGBT people. The conference was endorsed by Sir Elton John, who said: “The failure of many churches to welcome, accept and include LGBTQ+ people creates stigma, loneliness, fear and denial, causing lasting damage to their wellbeing and mental health.”

Chalke suggested that even offering pastoral concern or prayer could constitute psychological abuse. “Ultimately every church ought to want to provide sanctuary and safety for all, especially for those who have experienced hurt, rejection or marginalisation,” he said.

“While the debate about how to read the Bible in relation to LGBT+ people continues, the absence of safe and affirming churches has had a significant, negative and sometimes tragic impact on LGBT+ people, as well as on their families and friends.

“What churches often describe as pastoral concern, prayer or even ‘deliverance ministry’ for those with ‘same-sex attraction’ is, in fact, a highly toxic and psychologically abusive environment where vulnerable LGBT+ people, many of them teenagers or even children, report that they have been taught to believe that their desires are ‘sinful’.” In additional comments to the Guardian, Chalke said that the practices of many churches “amount to serious and sustained abuse”. www.christiantoday.com/article/churches.could.soon.face.prosecution.over.lgbt.treatment.says.steve.chalke/135759.htm

Of course this is becoming quite common all throughout the West. Simply sharing what the Bible teaches about human sexuality is now considered to be “hate speech” and something that must be cracked down on. And offering counsel for those who seek help for their unwanted sexual attractions is being outlawed in many places.

It is the same old slide down the tubes: First, an immoral behaviour or lifestyle is permitted. Then it is heavily promoted. And finally, those who dare to resist all this are persecuted. Sinful actions and behaviours become the new norm, and they also become mandatory.

And the apostates are fully happy to see all this come about. They first reject their own faith. They then embrace serious theological error as well as immoral practices and lifestyles. And then they demand that all Christians do the same – or else.

Apostasy is serious stuff. It of course has serious eternal consequences for the apostate, but it also does great harm to so many others. All the more reason why Christians must stand firm and stay firm. They must work at their faith and actively seek to resist that which would lead them away from biblical belief and behaviour.

Let me close with three important quotes on apostasy. The first is from C. S. Lewis in his classic book, Mere Christianity:

Now Faith, in the sense in which I am here using the word, is the art of holding on to things your reason has once accepted, in spite of your changing moods. For moods will change, whatever view your reason takes…. Consequently one must train the habit of Faith. . . . The first step is to recognise the fact that your moods change. The next is to make sure that, if you have once accepted Christianity, then some of its main doctrines shall be deliberately held before your mind for some time every day. That is why daily prayers and religious readings and churchgoing are necessary parts of the Christian life. We have to be continually reminded of what we believe. Neither this belief nor any other will automatically remain alive in the mind. It must be fed. And as a matter of fact, if you examined a hundred people who had lost their faith in Christianity, I wonder how many of them would turn out to have been reasoned out of it by honest argument? Do not most people simply drift away?

And this from North American theologian and New Testament scholar D. A. Carson from For the Love of God, vol. 2:

Lastly, these words of warning from the Apostle Paul as found in Acts 20: 29-3: “I know that after I leave, savage wolves will come in among you and will not spare the flock. Even from your own number men will arise and distort the truth in order to draw away disciples after them. So be on your guard!”