How far should believers go in maintaining fellowship?

When there are serious differences on serious issues, how much should Christians attempt to strive for unity? Let me preface this question by saying that each day I look for any connections or correlations between what I find in the morning news and what I read in my daily Bible study.

It is quite obvious what the big headline today is: most of the media is proclaiming – prematurely and therefore quite inaccurately – a Biden win in America. And sadly in the social media I notice some who claim to be Christians who are cheering this on. They seem to love Biden as much as they hate Trump. 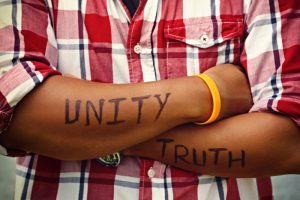 My morning reading included Romans 14 which is about divisions between weak and strong brethren. Specifically, it is about those who eat meat and those who do not. While Paul sides with the former – the strong believers – he informs his audience that it does not really matter what they eat. He urges as his core principle that they do not judge one another but love each other instead.

OK, that is good as far as it goes in this rather limited context. Meat-eating is not too serious nor sinful (although in v. 23 Paul says that whatever does not come from faith is sin). But what about in those areas where it is more serious and sinful? Then how does Christian fellowship work out?

All true Christians should know that things such as abortion and homosexuality are clearly sinful. If those claiming to be Christians are deeply involved in either, they need to repent and turn from their sin. Only then can Christian unity occur, and fellowship be restored.

But what happens when a believer may not so much be involved in doing those things, but fully supports those who do? If politicians like Biden and Harris and political parties like the Democrats fully support these things – and so many other things that clearly go against biblical values – can Christians in good conscience support them?

And what should Christians who do not support such politicians and parties do with these other believers? Do the principles found in Romans 14 apply here (don’t judge each other but just love one another)? Or are there other biblical truths that we need to bring into the equation?

There certainly are. Christian fellowship and unity are vital, but so too is Christian truth. When bad behaviour or bad beliefs are being allowed to go unchecked, Scripture makes it clear that this needs to be called out, and if need be, fellowship may need to be broken. But see more on this here: billmuehlenberg.com/2015/07/11/church-visitors-versus-church-members/

So how does the concerned Christian proceed here? It is harder if the ones promoting ungodly and unrighteous parties and policies are family members or close friends. The aim should be to keep relationships going while also seeking to reach out to the loved ones in the hopes of bringing them around.

As to “friends” on the social media, we have less need to hang on to everyone. If they are pushing all the beliefs and values that you oppose as a biblical Christian, you do not necessarily need to hang on to them. There is a place for letting some of these folks go if it seems clear that they are unlikely to change.

But one more thing can be mentioned here. If all this was just about somewhat differing political views and valid disagreements on some opinions about politics, that would be one thing. But the Christian cannot ignore the truth that something more sinister might be at work here. There is also the possibility of satanic deception.

It seems that with so much moral and spiritual darkness descending upon the West, and with so many unwelcome political outcomes of late – at least in the eyes of the conservative Christian – that we may well have far more than mere political differences taking place.

The Christian believes that there is such a thing as deception, and that there is a deceiver. When you get large numbers of folks who claim to be Christians actually supporting and championing things which the Scriptures clearly call sinful, then you know we have some real problems. I speak about deception here, offering numerous passages on the topic: billmuehlenberg.com/2012/03/13/on-deception/

Let me offer just a few of the verses I featured there. As to deception and the end times, Jesus had much to say about this, as in Matthew 24:

Matthew 24:4-5 Jesus answered: “Watch out that no one deceives you. For many will come in my name, claiming, ‘I am the Messiah,’ and will deceive many.
Matthew 24:10-12 At that time many will turn away from the faith and will betray and hate each other, and many false prophets will appear and deceive many people. Because of the increase of wickedness, the love of most will grow cold,
Matthew 24:23-25 At that time if anyone says to you, ‘Look, here is the Messiah!’ or, ‘There he is!’ do not believe it. For false messiahs and false prophets will appear and perform great signs and wonders to deceive, if possible, even the elect. See, I have told you ahead of time.

And Paul often warned about deception as well, eg:

2 Corinthians 11:3 But I am afraid that just as Eve was deceived by the serpent’s cunning, your minds may somehow be led astray from your sincere and pure devotion to Christ.
Ephesians 5:6 Let no one deceive you with empty words, for because of these things the wrath of God comes upon the sons of disobedience.
2 Timothy 3:13 While evil people and impostors will go on from bad to worse, deceiving and being deceived.

If much of what we see happening today is indeed a case of diabolical deception, then a few more things can be said. Perhaps these are indeed the end times. Who knows? But a characteristic of when Christ returns is that of widescale deception, unbelief, lawlessness and the like.

It also can be said that such deception may be part of how God is operating as he separates the wheat from the chaff, the sheep from the goats. When clearly unbiblical and ungodly beliefs and practices are embraced by people claiming to be believers, that is one way to see some much-needed sifting come about.

Am I saying that anyone claiming to be a Christian who supports political parties like the Democrats is into deception and worse? No. Some of these folks may be simply confused, or not very aware of either their own faith or what parties like this believe and are running with. Some may need basic education in biblical and political realities.

But still, when you have so many who say they are Christians wildly cheering on what might be a Biden win, you have to ask some hard questions. Satanic deception is certainly part of the explanation here. Sure, many of these folks may well be Christians in name only – they are not actually sons and daughters of the living God.

But some are. Maybe they are new Christians or poorly taught Christians. They need prayer. We need to try to reach out to them. We can hope they come to understand biblical truth more fully. And if and when possible, we can seek to maintain fellowship with them.

These are serious matters, and we dare not take them lightly. If we have a group of believers who basically can see no difference between political parties which are pro-death and anti-Biblical marriage and family – to name just two key issues – and those which are not, we are in a really bad place.

In sum, I may have raised more questions here than I have answered. But these are very serious issues indeed, and at the very least, biblical Christians need to prayerfully and carefully think about how best to proceed. Christian unity matters. But so too does biblical truth.

Let me leave you with a few concluding quotes along those lines:

“Peace if possible, truth at all costs.” Martin Luther

“To pursue union at the expense of truth is treason to the Lord Jesus Christ.” Charles Spurgeon

“Never let us be guilty of sacrificing any portion of truth on the altar of peace.” J. C. Ryle