Believers should avoid faulty ways of responding to persecution and anti-Christian bigotry:

Because I am a Christian, I of course write a lot about God. And since I am also fully involved in the culture wars, that too is often the subject of my articles. And since these wars are resulting in more and more anti-Christian persecution, that is also something I have addressed frequently.

So here I am, writing on all three topics – once again. And I do so in part for one reason. It has to do with how I see many believers responding to the wars we are in and the battles that we face. While many have the right idea as to the way forward, many do not. 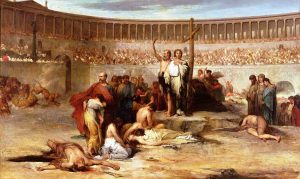 Those wrong sorts of responses are often dressed up in all rather biblical sounding jargon. Consider some of the quite common responses usually heard by so many Christians when they discuss such matters:

‘Just as the Bible predicted.’
‘This is all part of God’s plan.’
‘We were warned these things would happen.’
‘None of this surprises God.’
‘It’s all going according to plan.’
‘We have read the end of the book and we know that we win!’

While all these responses are basically true, what bothers me is what so often in fact accompanies these statements. And that is a fatalistic mindset. These believers think that since these things have been foretold or predicted, or that since God is in control, we just accept it all, do nothing, and simply grin and bear it.

They think we should just be resigned to our fate, and not do anything about what is happening. It is a hyper-spiritualised sort of response, and one that does not do full justice to the biblical data on this. Yes indeed, God is in charge and he is still on the throne. But that never means we are to sit by passively and do nothing.

While getting a full and proper grasp of how divine sovereignty goes along with human responsibility will always elude us – at least on this side of heaven – we have enough biblical truth to run with here. And that truth is clear: yes, God is sovereign, but he expects us to do what he asks of us. The great truth of his complete sovereignty is never meant to turn us into robots or doormats. We have a job to do, and we must do it.

I have too often been told by other Christians that all my warnings, all my sounding of the alarm, and all my watchman on the wall or prophetic type ministry is basically a waste of time. They think it is a distraction from the main game – whatever that is – or that I am living in fear and just pushing panic, or that I am not trusting God, etc.

Well, the Old Testament prophets also got plenty of criticism and abuse. They too were told to just ease up, chill out, and zip the lip. But they did not. They kept on doing what God had called them to do. And even more remarkable is the fact that they kept on doing what God called them to do, even though God told them ahead of time that they would not be well-received at all.

Indeed, prophets like Jeremiah were actually told beforehand that the words they had to preach would NOT be listened to but would be roundly rejected. Imagine that! Imagine being given a commission to preach to a people, knowing full well the masses would not listen and would steadfastly reject you and your words. Jeremiah for example stuck to this thankless task for some 40 years!

Lots of Christians today would say, ‘What’s the point? Why waste your time on this?’ But when God calls you to do something, you do it, regardless of the results. Whether or not people respond is beside the point: we are to obey God and faithfully do what he tells us to do.

Sure, there are times when people will not listen to us, and we then should just move on to those who will listen. As Jesus told his followers: “If anyone will not receive you or listen to your words, shake off the dust from your feet when you leave that house or town.” (see Matthew 10:5-15).

And as to persecution, the Bible everywhere tells us that we will be persecuted. But that again should not lead us to passivity or fatalism. Nor does it mean that we just need to put up with it and do nothing about it. Two biblical incidents come to mind here.

One, Jesus told his disciples in Matthew 10:23: “When they persecute you in one town, flee to the next.” That is, we need not simply resign ourselves to this fate, and say that we just have to put up with it. While there is a place for martyrdom, God does not want us to be fatalistic nor stupid.

Two, when Paul was persecuted, he sometimes fled, and he sometimes put up with it. But he also had a third response: when he was wrongly being treated by the Roman authorities, he appealed to Caesar (see Acts 25). He told his tormentors that what they were doing was wrong and illegal, and so the final chapters of the book of Acts tell us about how this lengthy process of appealing for justice worked itself out.

Today we too can have various responses to persecution and anti-Christian bigotry. We need not just put up with it, or just say that it is inevitable. At times we can fight against it. And that can include working hard to prevent some of this persecution from happening in the first place.

Let me close by saying one final thing about persecution. And as is often the case, I must warn against those who want to derail things because of their pet peeves. Those with their fav eschatological views can especially get itchy fingers at a time like this. But I ask you to kindly cease and desist.

I refer to various end-times scenarios, including whether or not there is some specific seven-year tribulation period, and whether or not Christians will go through it, or part of it. That of course has been the stuff of massive debate for quite some time now, and it is not my intention to get into it all over again here. (And yes I do fully know all the pros and cons in the debate thanks!)

But I know that many believers are convinced that we Christians will be snatched away before this period occurs, and so they can sometimes have a rather cavalier and glib attitude to what is happening: ‘Hey, no biggee, we will all be taken away, so nothing to get worried about.’

I am not sure if that is the best way to approach such matters. Again, I do not want to start a theological WWIII here, but something Corrie ten Boom once said on persecution really resonates with me. And she of course knew far more about suffering and persecution – based on her years living under the Nazis – than most of us will ever know. As she wrote in a letter in 1974:

There are some among us teaching there will be no tribulation, that the Christians will be able to escape all this. These are the false teachers that Jesus was warning us to expect in the latter days. Most of them have little knowledge of what is already going on across the world. I have been in countries where the saints are already suffering terrible persecution. In China, the Christians were told, “Don’t worry, before the tribulation comes you will be translated – raptured.” Then came a terrible persecution. Millions of Christians were tortured to death. Later I heard a Bishop from China say, sadly: “We have failed. We should have made the people strong for persecution, rather than telling them Jesus would come first. Tell the people how to be strong in times of persecution, how to stand when the tribulation comes – to stand and not faint.” I feel I have a divine mandate to go and tell the people of this world that it is possible to be strong in the Lord Jesus Christ. We are in training for the tribulation, but more than sixty percent of the Body of Christ across the world has already entered into the tribulation. There is no way to escape it. We are next. endtimepilgrim.org/corrie.htm

Once again, not all may agree with her. That is fine. Some of you may be convinced that a pre-trib rapture theory is the most important and most certain biblical doctrine there is. Well, it might be, but then again, it might not be. Christians can and should be free to differ on these things. But the spirit of what Corrie is trying to tell us here is vitally important.

We must not think that we can always be exempt from suffering, persecution and hardship. The Bible nowhere promises us this. Just as Jesus suffered, was rejected, and was bitterly opposed – so too will his followers be. That must always be the case.

But exactly how we respond to all this persecution and opposition will depend on the situation I suppose. And my main point here is that a fatalistic or careless attitude is probably not the best way that we should be responding to it.