Yes there are those who are at enmity with God:

Some of you might be asking: ‘What, enemies of God? God has enemies? But I thought he loved everybody, so he cannot have enemies. At least he cannot regard anyone as an enemy, even if others see themselves as enemies of God! Isn’t that right?’

Well, no actually. There are indeed enemies of God, and from both sides of the equation sadly. There are of course those who hate God and resist God and see him as their one great enemy, even as so many of them deny his very existence. But I am speaking here of those that God regards as enemies.

The truth is, those who refuse to acknowledge God and his rightful place in their lives are living in enmity against God. Here I will present some of the biblical data on this, and then discuss how we are to respond. Plenty of Old Testament texts can be offered here. These are just some of them: 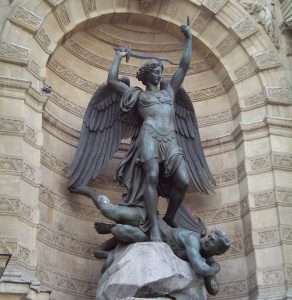 Judges 5:31 Thus let all Your enemies perish, O Lord;
But let those who love Him be like the rising of the sun in its might.

Psalm 110:1 The Lord says to my Lord:
“Sit at my right hand,
until I make your enemies your footstool.”

Nahum 1:2 A jealous and avenging God is the Lord;
The Lord is avenging and wrathful.
The Lord takes vengeance on His adversaries,
And He reserves wrath for His enemies.

‘Ah, but that is the Old Testament’ you say. ‘Everything is different in the New Testament.’ Well, not quite. We find plenty of passages there which say the same thing. Indeed, it is interesting how often Ps. 110:1 is quoted or referred to in the NT, by Jesus and by others. Here are seven cases of this:

Mark 12:36 David himself, in the Holy Spirit, declared, “‘The Lord said to my Lord, “Sit at my right hand, until I put your enemies under your feet.”’

“‘The Lord said to my Lord,
“Sit at my right hand,
until I make your enemies your footstool.”’

Acts 2:34-35 For David did not ascend into the heavens, but he himself says,

“‘The Lord said to my Lord,
“Sit at my right hand,
until I make your enemies your footstool.”’

1 Corinthians 15:25 For he must reign until he has put all his enemies under his feet.

Hebrews 1:13 And to which of the angels has he ever said, “Sit at my right hand until I make your enemies a footstool for your feet”?

Hebrews 10:12-13 But when Christ had offered for all time a single sacrifice for sins, he sat down at the right hand of God, waiting from that time until his enemies should be made a footstool for his feet.

And then we have other texts, such as:

Luke 1:70-74 as he spoke by the mouth of his holy prophets from of old,
that we should be saved from our enemies
and from the hand of all who hate us;
to show the mercy promised to our fathers
and to remember his holy covenant,
the oath that he swore to our father Abraham, to grant us
that we, being delivered from the hand of our enemies,
might serve him without fear,

Acts 13:9- 10 But Saul, who was also called Paul, filled with the Holy Spirit, looked intently at him and said, “You son of the devil, you enemy of all righteousness, full of all deceit and villainy, will you not stop making crooked the straight paths of the Lord?”

Romans 5:10 For if while we were enemies we were reconciled to God by the death of his Son, much more, now that we are reconciled, shall we be saved by his life.

Romans 11:28 As regards the gospel, they are enemies for your sake. But as regards election, they are beloved for the sake of their forefathers.

Philippians 3:18 For many, of whom I have often told you and now tell you even with tears, walk as enemies of the cross of Christ.

James 4:4 You adulterous people! Do you not know that friendship with the world is enmity with God? Therefore whoever wishes to be a friend of the world makes himself an enemy of God.

So the idea that God regards unrepentant sinners as enemies is found throughout all of Scripture. But let me finish by looking at one last passage which I just read again in my daily readings. It is 2 Thessalonians 1:5-10:

This is evidence of the righteous judgment of God, that you may be considered worthy of the kingdom of God, for which you are also suffering— since indeed God considers it just to repay with affliction those who afflict you, and to grant relief to you who are afflicted as well as to us, when the Lord Jesus is revealed from heaven with his mighty angels in flaming fire, inflicting vengeance on those who do not know God and on those who do not obey the gospel of our Lord Jesus. They will suffer the punishment of eternal destruction, away from the presence of the Lord and from the glory of his might, when he comes on that day to be glorified in his saints, and to be marveled at among all who have believed, because our testimony to you was believed.

This is all about justice and vindication for God’s people. Their enemies will not get off the hook – God WILL judge them, if not in the present, then certainly in the future. And this is meant to be great news for suffering and persecuted believers.

Let me offer some commentary on this. Gary Shogren puts it this way: “Throughout this chapter, the apostle carefully distinguishes two groups: those who will be accounted worthy of the kingdom and those who have rejected the gospel (1:8) and will face God’s wrath. His anger falls most strongly on those who actively persecute his people (1:6), since the enemies of the church are by extension the enemies of God.”

God is all about just outcomes. Over and over biblical and extrabiblical literature declares that God’s judgment is in accordance with his justice. . . . God considers it a just thing to pay back trouble to those who trouble you. Scripture addresses frequently the theme of divine recompense. . . . The author claims that it would be unjust for God to allow the persecutors to escape their deserved judgment.

But some Christians will claim that such talk of judgment and vindication is at odds with a God of love. Not so. Leon Morris is right to say this:

If it is true that the New Testament speaks much of the love and mercy of God it is also true that it does not gloss over the serious nature of moral issues. Our Lord spoke plainly of the fate of those who persist in ways of sin and impenitence (Mark 9:47 f.; Luke 13:3, 5; etc.). Those who followed after did not slur over this truth. They said plainly that the evil-doer can look for nothing but the continuing wrath of God (Rom. 1:18ff.). Often retribution is pictured as overtaking men in the world to come, but there are not wanting passages which indicated that it may operate in the here and now (e.g., Rom. 1:24, 26, 28). This verse ought not then to be dismissed as un-Christian, but recognized as giving expression to a well-defined strand of New Testament teaching (albeit one unpalatable to modern men).

Or as Jeffrey Weima puts it:

This is perhaps the harshest language that Paul uses anywhere to describe God’s just punishment of the wicked. Consequently, some have stumbled over the apostle’s words here, finding such language of judgment to be at odds with the notion of a loving and merciful God. However, one cannot pit God’s mercy against his love. . . . Marshall comments, “Nothing in the NT suggests that God’s love is indifferent to justice, and that he bestows a free pardon on his enemies at the cost of failing to defend the persecuted against the persecutors. Indeed, it is difficult to see how the ultimate justice of God to those who suffer can be defended in a situation where the persecutor knows that in the end he will be freely forgiven.”

I speak to this passage further in this older article: billmuehlenberg.com/2015/03/16/there-is-nothing-wrong-with-payback/

So yes, there are enemies out there, and yes, we can seek to have God protect us from them, and we can ask God to get them saved, or justly judged. I have written before about how fully proper it is for Christians to hope and pray for justice and vindication – even in this life. See here for example: billmuehlenberg.com/2020/05/28/praying-against-enemies/

While we pray for our enemies and our persecutors, and hope they come to Christ, we can also seek God to bring about justice. Those two things are not mutually exclusive. Indeed, we have so many psalms for example in which this very thing is taught. Those prayers are the sorts of prayers we can pray as well: billmuehlenberg.com/2020/08/04/yes-seek-justice-and-vindication/

Again, we pray for everyone, but many will remain committed enemies of God, the gospel, and therefore of God’s people. We are told that we can and should seek God’s protection and his justice. Indeed, a few chapters later Paul says this: “Finally, brothers, pray for us, that the word of the Lord may speed ahead and be honored, as happened among you, and that we may be delivered from wicked and evil men. For not all have faith” (2 Thes. 3:1-2).

We need not be doormats, walked all over by the enemies of God. At the very least, we can pray that we are delivered from such people. And it is not un-Christian to rejoice in knowing that those who do not repent and turn from their wickedness will be justly dealt with by God, if not in this lifetime, then at the final judgment. That is good news indeed.