Pretending we are not in all-out warfare helps no one:

When most Christians are enjoying the good life on a cruise ship instead of enduring the hardships of a battleship in the midst of blistering warfare, it is hard to get them to take seriously the times that we are in. Those in the thick of the battle and those biblically cluey know full well that warfare is all around us.

But the carnal Christian, the fleshly Christian, and the nominal Christian has no idea of what is transpiring all around them. And even if you can alert some of them to the many attacks and assaults that are taking place on the faith, on freedom, and on family, they still think you are being melodramatic and overstating the case. 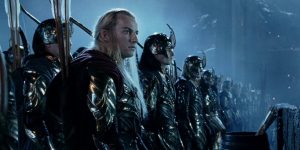 Even if they do see some of the dangers and some of the threats, they offer a policy of appeasement. They eschew the need for conflict and battle and seek the easy way out. Those familiar with the Lord of the Rings will recall the scene – at least from the film version – from The Two Towers in which we have this bit of dialogue:

GANDALF: This is but a taste of the terror that Saruman will unleash. All the more potent for he is driven now by fear of Sauron. Ride out and meet him head on. Draw him away from your women and children. [Leans forward and puts a hand on Théoden’s chair. Théoden looks at his hand warily.] You must fight.

ARAGORN: You have two thousand good men riding north as we speak. Éomer is loyal to you. His men will return and fight for their king.

THÉODEN: They will be three hundred leagues from here by now. Éomer cannot help us. I know what it is that you want of me. But I will not bring further death to my people. I will not risk open war.

[Gimli takes a bite of his bread as he watches the exchange between Aragorn and Théoden.]

ARAGORN: Open war is upon you. Whether you would risk it or not.

That exchange fully and graphically makes my point. Some want nothing to do with battles, conflict and warfare. Others know that such things are everywhere to be found, and we do not have a choice in the matter. We either fight, or we perish.

Of course the Christian knows that this is ultimately spiritual warfare, and the battles must be fought with spiritual weaponry. If the problem is spiritual, the solution must be spiritual. So we pray and fast and intercede and do spiritual warfare. But the hostilities and conflict are being fought on so many levels.

The spiritual battles also are being manifest on political, social, ideological and cultural levels. So we must engage on all fronts, and on every level. The many things I have written about of late – be it the Great Reset, the battle for life, or the various “conversion therapy” bills that will fully hamstring Christian help and counsel to those who need it most – are all examples of the numerous battlefronts that surround us.

The sad thing is that so many believers are utterly clueless. Everything that so many have warned about over the centuries, including of course what is found in Scripture – seems to be coming about right before our very eyes. It is so obvious the way it is all unfolding. Yet most folks have no clue. I just want to grab people, shake them, and shout “Wake up!!”

Let me mention just a few more hair-raising battlefronts that are already upon us. We just recently had Qantas airlines telling us that it will not take passengers without a vaccine – at least on international flights. Regardless of what you think of vaccines, this is a big worry indeed. Why does Revelation 13:16-17 come to mind?

And in the US if Biden does indeed get into the White House, the crackdown on Christianity will be ramped up all that much more. For example, Al Mohler warns about this: “A Direct Threat to Christian Education—The Human Rights Campaign Demands that the Biden Administration Deny Accreditation to Christian Colleges and Schools”.

The accreditation of Christian colleges and schools has just been directly targeted by the nation’s most influential LGBTQ organization. The Human Rights Campaign has recently issued a document directed at the incoming administration entitled Blueprint for Positive Change 2020. The Blueprint demands that President-elect Biden adopt a legislative agenda and enact specific executive orders that are in line with the LGBTQ movement—a movement that Biden pledged to champion.

Contained within its pages are perhaps some of the most alarming demands that threaten religious liberty, and the mainstream media has given little to no attention to this dimension of the report. The Blueprint is not ambiguous—it makes detailed policy positions and recommendations, department by department, for the Biden Administration to deploy once the president-elect assumes office. From the Department of Agriculture to the Department of Health and Human Services, the Human Rights Campaign demands the enactment of policies to prohibit what is identified as discrimination….

This is an undisguised attempt to shut down any semblance of a Christian college or university that would possess the audacity to operate from a Christian worldview. This comes with chilling specificity and clarity. We dare not miss what is at stake. albertmohler.com/2020/11/18/a-direct-threat-to-christian-education-the-human-rights-campaign-demands-that-the-biden-administration-deny-accreditation-to-christian-colleges-and-schools

And then in Canada we have the secular left leader Trudeau pushing even further censorship of all opposing voices. As one headline puts it, “Trudeau government introduces bill to force online media companies to push liberal content”. The article includes this warning from one commentator:

Jay Cameron, a lawyer for the Canada-based Justice Centre for Constitutional Freedoms told LifeSiteNews that Bill C-10 is the “first part of the push” amongst the Trudeau Liberals to limit or regulate speech online that does not follow the party ideology.”

“It is clear from recent statements by the PM and the Heritage Minister that the federal government wants to increase control and penalties for speech and content that is not approved of by the ideologues in the Liberal Party. Unsurprisingly, the purpose of Bill C-10 is not to increase freedom of ‘thought, belief, opinion, and expression’ (section 2(b) of the Charter) but to further restrict it,” Cameron told LifeSiteNews. www.lifesitenews.com/news/trudeau-government-introduces-bill-to-force-online-media-companies-to-push-liberal-content

All throughout the West there is a clear-cut war between good and evil taking place. There is an all-out battle between light and the darkness occurring. And at the end of the day, folks are on one side or the other. We either stand with God and his purposes or we stand with the devil and his purposes. In such cosmic warfare there is no neutral territory – there is no sitting on the fence,

And as these battles intensify, the one good effect of all this is that it separates the wheat from the tares. It demonstrates who really belong to God and who really do not. It shows us clearly, in other words, that there are two distinct humanities.

I have written often on this before. For a fuller discussion about all this, see this piece: billmuehlenberg.com/2017/06/07/two-humanities-two-destinies/

I listed a number of passages there, but since I have recently read through the epistles to the Corinthians, let me offer just a handful of verses that demonstrate this two-fold division of mankind:

1 Cor. 1:18 For the message of the cross is foolishness to those who are perishing, but to us who are being saved it is the power of God.

2 Cor. 4:3-4 And even if our gospel is veiled, it is veiled to those who are perishing. In their case the god of this world has blinded the minds of the unbelievers, to keep them from seeing the light of the gospel of the glory of Christ, who is the image of God.

2 Cor. 6:14-16 Do not be unequally yoked with unbelievers. For what partnership has righteousness with lawlessness? Or what fellowship has light with darkness? What accord has Christ with Belial? Or what portion does a believer share with an unbeliever? What agreement has the temple of God with idols?

Two distinct camps. In sharing such biblical texts I am not saying that every leftist or Democrat in the US or Labor supporter in Australia is a son of darkness, or is fighting against God and his Kingdom. But sadly there certainly is some sort of a connection here.

Those who promote and rejoice in the culture of death, the persecution of Christians, the full-frontal assault on marriage and family, and the rise of Big Brother government and the assault on personal freedoms are not exactly championing the cause of Christ.

So we must be aware that behind the various political and ideological battlegrounds lies an even more ominous spiritual battleground. And open warfare is indeed upon us, whether we like it or not. The only thing that remains is for Christians to decide what they will do, and where they will stand, in such dark times.

Or to return to Tolkien, and The Fellowship of the Ring:

‘I wish it need not happened in my time,’ said Frodo.

‘So do I,’ said Gandalf, ‘and so do all who live to see such times. But that is not for them to decide. All we have to decide is what to do with the time that is given us.’