This can be of help as you read and study the book of Daniel:

The last of the four so-called major prophets is quite a significant book, even though much shorter than the first three. While prophecy buffs and eschatology fans may especially pay a lot of attention to Daniel, all Christians should read, study and savour this vitally important book. It is much more than just fascinating stuff about the last days. As Wendy Widder puts it: 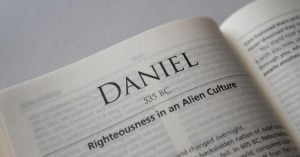 The book of Daniel is often read for its contribution to our understanding of end-times events, but sometimes Christians have been so obsessed with this that we have missed its main message: God is in control, no matter how things look, and his kingdom will one day fill the earth. This message grows out of the book’s primary theme: the kingdom of God — its king, its citizens, and its realization on earth. The book reveals why God is the king of all kings, and it offers perspective on how citizens of his kingdom should live while they await the full realization of God’s rule on earth.

Or as Bryan Chapell remarks:

These are incredibly important prophecies, but we can become so stressed and combative about the interpretation of particular aspects that we neglect the prophet’s central message: God will rescue his people from the miseries of their sin by the work of the Messiah. The righteous will be vindicated, evil will be destroyed, and the covenant blessings will prevail because Jesus will reign. All this occurs not because humans control their fate or deserve God’s redemption but because the God of grace uses his sovereign power to maintain his covenant promises forever. This gospel according to Daniel should give us courage against our foes, hope in our distress, and perseverance in our trials—if we will not let every prophetic mystery derail us from the main message of prevailing grace.

Getting the historical fit to a book like this is vital, so let me offer the timeline that Rodney Stortz presents (all dates are BC of course):

As with the book of Revelation, how one interprets Daniel, especially its second half, depends heavily on what eschatological system one adheres to. A premillennial interpretation will look at the book in rather different ways than from those of another slant. That lengthy and complex discussion cannot here be entered into, but for more on various millennial options, see this two-part article:

Like Revelation and parts of Zechariah, and some of the other prophets, large sections of Daniel are known as apocalyptic literature. In his book on the prophets Gary Smith says this about Daniel: “In these apocalyptic scenes, heavenly messengers revealed hidden secrets about history, the final judgment, and God’s salvation of the righteous in strange and mysterious symbolic messages. The visions include dramatic presentations of great conflicts to come in the future, with vivid images of earthly events and hints of heavenly turmoil.”

Tremper Longman says this about it:

The term apocalyptic describes the type of revelation that is found in Daniel and Revelation and some portions of the Old Testament that have some or all of the same characteristics as those two books (Is. 24-27; parts of Zechariah). . . . While virtually every chapter of the Old Testament contains figurative language of one sort or another, apocalyptic literature (Daniel, Revelation, and extrabiblical apocalyptic sources) has a certain distinctive and strikingly pervasive use of figurative language.

Finally, it is not hard to find those who describe apocalyptic literature as pessimistic. After all, the present is evil and the people of God are experiencing oppression and persecution. And the future is going to bring judgment and devastation. It all sounds very depressing.

Despite all the difficulties and differences in interpreting the second half of the book, a dominant message can still be found in the book. As James Montgomery Boice puts it, “The great and most important theme of Daniel is that there is but one God, who is Jehovah, and that he is sovereign over the events of history.” Or as J. Daniel Hays writes,

The central message of Daniel is unmistakable: God is sovereign and rules over all people and kingdoms even though it does not always look that way. Although the Babylonians (and then the Persians) seem to control the world, Daniel proclaims that Yahweh is still very much in control and is moving to bring history itself to his divinely directed culmination. Thus there is much more to history than is often apparent on the surface. In the meantime, the true and faithful followers of God can expect to suffer, but they can endure the suffering in the knowledge that God will ultimately bring history to a climax centered on the establishment of his kingdom.

As we read in Dan. 6: 26-27, “His kingdom will not be destroyed, his dominion will never end. He rescues and he saves; he performs signs and wonders in the heavens and on the earth.” That is glorious good news, and it will sustain God’s people in the roughest of times.

Without doubt the principal theological focus of the book is the sovereignty of God. Every page reflects the author’s conviction that his God was the Lord of individuals, nations, and all of history. In the stories in chaps. 1-6. Yahweh is set forth as the God who rules over the kings and nations of the earth. . . . Daniel 7-12 sets forth God’s sovereignty over the nations and empires of the world. The Lord of history raises them up and brings them down.

Or as Longman puts it in his commentary:

God is all-powerful, and this narration and demonstration of his power has one important purpose: the encouragement of a beleaguered people. Faithful Israelites must have suffered in exile as they remembered the good relationship that they as a people had with their God in the land of Palestine. They must have suffered as they were forced to work for the good of the nation that oppressed them. And they did suffer as they found themselves in situations where they were pressed to compromise or else face dire consequences. The message of Daniel that God is all-powerful and in control in spite of present conditions intended to present a powerful encouragement to these people.

Iain Duguid also stresses this idea of encouragement, even in a time of judgment:

To live faithfully in exile, we first need to know God’s faithfulness. This is not altogether as comforting a truth as you might imagine, since the first aspect of God’s faithfulness that we see in this chapter is God’s faithfulness in judgment. Judah’s exile from the land in Daniel’s time was not merely an accident of fate or the tragic result of the expansionist policies of imperial Babylon in the late seventh century B.C. As Daniel 1:2 makes clear, the exile came upon Judah because the Lord handed King Jehoiakim over to the power of Nebuchadnezzar. God gave His people into the hand of their enemies….

Yet the recognition that their fate came from the hand of God as a faithful act of judgment was itself an encouragement to the exiles. Their future was not controlled by Babylon or its gods, but by the Lord, the God of heaven (Dan. 2:19). The one who had sent them into exile had also promised to be with them there, and ultimately to restore them from exile after a time of judgment.

And Ernest Lucas offers some helpful application to these great themes:

Although Daniel exposes the hubris of human rulers and the divine judgment it attracts, it also states that God gives rule and dominion to humans. Daniel 4:10-12 paints a picture of the good that can be achieved by human rulers. When humans image God, they have the right to rule in his name. When they try to be God, they forfeit that right and may become “bestial.” Those who recognize God’s rule over them are in a position to allow God to rule through them.

Because God allows rulers enough freedom to become bestial, the faithful sometimes suffer. Daniel’s stories encourage the faithful to become involved in a pagan world, with the hope of some measure of success and effective witness, even if there are risks. In the visions this seems impossible. God’s sovereignty means that the faithful cannot take his response to their situation for granted. Belshazzar’s blasphemous conduct meets with swift retribution; that of the little horn is allowed much longer before being ended. The faithful may be delivered from death in a fiery furnace (ch. 3) or through death in the fires of persecution (ch. 12).

For more discussion on the book of Daniel see these two articles: billmuehlenberg.com/2015/09/11/on-the-book-of-daniel/

Chapell, Bryan, The Gospel According to Daniel (Baker, 2014)
Hamilton, James, With the Clouds of Heaven: The Book of Daniel in Biblical Theology (IVP, 2014)
Longman, Tremper, How to Read Daniel (IVP, 2020)