Here are some tools to help you read and study the book of Lamentations:

The book of Lamentations is usually grouped in the wisdom literature. If it were placed in the prophetic books, we would then have 17 books, instead of the usual 16. This short book (5 poems in 5 chapters) was penned after the fall of Jerusalem. It deals with the pain of the prophet as God’s people are taken away into Babylonian captivity in 587/586 BC. See the account of this in 2 Kings 24-25. 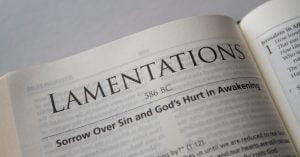 This is not the only biblical book that is about lament, grief and complaint. Job for example complains to God about his situation. And the psalter features numerous lament psalms. I have discussed these before in various places, including in this article: billmuehlenberg.com/2012/02/02/the-lament-psalms/

So this book is part of a larger biblical tradition. As J. Andrew Dearman explains:

Approximately half of Psalms is comprised of individual and corporate laments/complaints, with those of individuals being the most frequent. These psalms have some or all of the following formal characteristics: complaints and/or cries of dereliction, petitions for deliverance and/or judgment on the enemies, confessions of sin, expressions of trust, and vows. Lamentations 3 and 5 have enough of these formal characteristics to be described as an individual and a corporate lament respectively, quite apart from their place in the book.

Or as F. W. Dobbs-Allsopp states:

What gets voiced in Lamentations is as important as the fact of voicing itself. Four aspects of Lamentations’ voiced content may be highlighted initially: grief, complaint, anger, and fidelity. These poems show and voice grief throughout (1:2, 11, 16, 17, 20–21; 2:9–13, 18–19; 3:48–51; 5:15, 17). This liturgy of grief functions in multiple ways. Practically, through the example of its speech, Lamentations both gives permission to grieve and provides a vocabulary for grief. Indeed, by including expressions of grief in speech to God, Lamentations, like the Gospels’ portrayal of a grieved and grieving Jesus, witnesses grief and the work of grief as integral parts of biblical faith and piety….

Because of all this, in many ways this may be one of the most depressing books you will read in the entire Bible. How can it not be, given its subject matter? Jerusalem and the temple have been destroyed, God’s enemies have triumphed, and God’s people have been carried away as captives in a foreign land.

So certain were the people of their land, their capital, and their temple as being inviolate, that when it was all gone, the devastation and despair was overwhelming. Under King David and King Solomon Israel was the envy of the world, and seemed to be set for a wonderful, long-term future. How different things were three and a half centuries later. Says John Mackay:

There were also other territories which had come under the sway of Jerusalem for longer or shorter periods and, when it functioned as an administrative centre, wealth and resources flowed into the capital. But that has all gone. Jerusalem’s fortunes have been reversed and the city is a forced labourer. The capital, like other conquered territories, is compelled to pay tribute and provide compulsory labour for her conquerors. The city has moved from royal status to slavery.

O God, the nations have come into your inheritance;
they have defiled your holy temple;
they have laid Jerusalem in ruins.…
How long, O Lord?

By the rivers of Babylon we sat and wept when we remembered Zion. There on the poplars we hung our harps, for there our captors asked us for songs, our tormentors demanded songs of joy; they said, “Sing us one of the songs of Zion!” How can we sing the songs of the LORD while in a foreign land?

The Spirit then lifted me up and took me away, and I went in bitterness and in the anger of my spirit, with the strong hand of the LORD upon me. I came to the exiles who lived at Tel Abib near the Kebar River. And there, where they were living, I sat among them for seven days, overwhelmed.

So the king asked me, “Why does your face look so sad when you are not ill? This can be nothing but sadness of heart.” I was very much afraid, but I said to the king, “May the king live forever! Why should my face not look sad when the city where my ancestors are buried lies in ruins, and its gates have been destroyed by fire?”

That is the backdrop to the book – the reason for all the grief, all the sorrow, and all the lament. And even though God is not mentioned in this book, it is clear that it is the Lord, not Babylon, that is behind all this. Israel had broken its covenant obligations – that is why all this has happened. As Robin Parry comments:

Covenant is the context within which the theology of sin and punishment in Lamentations must be understood. The book presupposes the story of God’s covenant relationship with Israel. That the word “covenant” does not appear in the book is beside the point – the concept clearly underlies the poems…..

Lamentations never asks, “Why has this happened to us?” This is because the “why” is already known – Israel had broken the covenant law. Rather, the anguished questions behind Lamentations are, “Why punish so severely?” and “How long until you save?” The book at no point seeks to protest the innocence of the people, and the admission of sin is found on the lips of every speaker….

But the reader of the book understands that not everything here is gloom and doom. Even in the midst of all this darkness and despair, pain and anguish, there are still words of hope – wonderful hope. The centre of the book contains these glorious verses (3:21-26):

Yet this I call to mind
and therefore I have hope:
Because of the Lord’s great love we are not consumed,
for his compassions never fail.
They are new every morning;
great is your faithfulness.
I say to myself, “The Lord is my portion;
therefore I will wait for him.”
The Lord is good to those whose hope is in him,
to the one who seeks him;
it is good to wait quietly
for the salvation of the Lord.

These incredible words can speak for themselves. But let me offer a bit of commentary, nonetheless. Philip Graham Ryken offers us these thoughts:

These verses, in which Jeremiah praises God for his faithful mercies and surrenders to his timetable for salvation, form the climax of the book of Lamentations. According to the canons of Hebrew poetry, the most important truths are contained in a work’s center. In these verses, which form the heart of Jeremiah’s third lament, the prophet reaches a place of comfort and hope that marks a turning point in his spiritual experience.

The unbroken mood of despair was displaced by a beautiful affirmation of hope in spite of suffering (cf. Job 1:21; Hab 3:17–18; Rom 5:3; 1 Pet 4:12–13). The basis for renewed hope is God’s “great love.” . . . Whereas earlier the writer accused God of cruelty and faithlessness, now he exalted God’s love and “faithfulness.” Verse 23 is the best known verse in Lamentations (memorialized by the popular hymn “Great Is Thy Faithfulness”). In the midst of chaos and depression, the poet revealed a deep faith (vv. 22–24) in the trustworthiness of God: “Great is your faithfulness”.

And J. Daniel Hays also speaks to this message of the book, noting the tension between God’s judgment and his grace:

Lamentations is also a sad, solemn acknowledgment that Jeremiah had been right all along about the coming judgment on Jerusalem and Judah and about how horrific it would be. He warned repeatedly for years that if the people in Jerusalem and Judah did not repent and turn back to God, then the Babylonians would invade and God would use that terrible invasion to bring judgment upon them. Jeremiah, however, was not only ignored by the leaders in Jerusalem, but he was also persecuted. Thus the horror in Lamentations is a vindicating affirmation that Jeremiah’s words about the coming judgment were indeed true. It does also suggest, however, that if his words about judgment are true, then his words about the future restoration and new covenant are also true, leaving the readers with hope.

These solid and scholarly works are mainly from conservative, Reformed and evangelical points of view.