Here are some aids as you read and study Jeremiah:

The book of Jeremiah is a vitally important Old Testament book. He is one of the most well-known and most-read prophets, and for good reason. His persistence in proclaiming the whole counsel of God, even in the face of dogged and determined opposition is amazing to behold. For over forty years he preached a message that was overwhelmingly rejected. 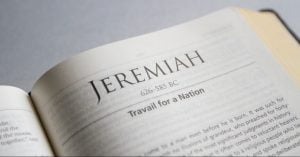 Yahweh even told him ahead of time that the people would not listen to him. We only read of two people in the entire book who respond favourably to his prophetic preaching. The overwhelming bulk of the people preferred the false prophets who told them what they wanted to hear.

But Jeremiah told them what they needed to hear, with repentance at the top of the list. Indeed, over 100 times in the book he tells the people to turn around or repent. But to no avail. Because he ministered in the decades just before the fall of Jerusalem in 586 B.C., he lived to see his warnings come to pass.

Having that historical framework in mind helps us to better understand this book. So too is the attempt to see the overall structure of the book. It can be rather disjointed, but some sort of outline can be established. Alec Motyer offers a succinct 10-point outline of the book:

As to the contents of this large book, there is so much that one can say about it. But let me look in some detail at just three key themes or emphases found therein.

We know more about Jeremiah than we do most of the other prophets. We learn a lot about the man in this book, and we learn that his heart broke with the things that broke the heart of God. He grieved over the people’s sins, and he grieved over their justly deserved punishment.

So close is Jeremiah to Yahweh that it is often difficult to tell who is speaking in the book: God or the prophet. Commenting on Jer. 14 for example, John Goldingay writes:

Here again is Jeremiah sharing the anguish of God, Indeed, it is a puzzle to decide whose anguish is referred to here. . . . We are not sure whether we are reading lyrical poetry or the words of Yahweh. But the reason why we cannot tell whether we are sharing Jeremiah’s anguish or God’s is that both are the same thing, because Jeremiah is identified with God. Jeremiah is torn apart not merely because of his one affliction, nor only because of Judah’s affliction, but because of the affliction of God, which God allows him to share.

Or as J. A. Thompson says in his commentary: “Jeremiah was never a dispassionate observer of his nation’s suffering, but entered into the anguish of the people and suffered with them.” He notes that other prophets share in this reality, and goes on to say,

The problem of these men was that they were bearing a message of divine judgment while at the same time sharing the sufferings of the people either in vision or in fact. But they were men torn asunder between God and the people, to both of whom they were bound with deep ties. This combination of love and anguish is nowhere seen more clearly than in Jeremiah.

Thus the prophet bore a double, even a triple, load of suffering: he not only had his own personal grief to carry, but he shared in God’s suffering, as well as the suffering of God’s people. The so-called confessions of Jeremiah are a good example of this.

Part of the personal pain of Jeremiah is found in his “confessions”. They have to do with his concerns about what is going on: why the wicked seem to flourish, why he is being persecuted, etc. They are laments or complaints, asking God why things are the way they are.

Various lists of them have been offered, with no unanimity as to exact passages, but most agree that parts of these chapters contain his 6 to 8 laments: Jer. 11, 12, 15, 17, 18, and 20. The earlier ones include a reply from Yahweh while the latter ones do not.

Consider the first one: Jer. 11:18-23 (which some extend to 12:4 or 12:6). Here Jeremiah bewails all the opposition he is facing, and asks God to vindicate him. Chris Wright says this about this first “confession”: “Jeremiah’s preaching was not calculated to make him popular – to say the least. In fact it put him in danger of his life.”

In these confessions “we have interwoven a series of deeply personal encounters between Jeremiah and God. They are a mixture of complaint, protest, grief, self-pity, loneliness and pain – closely similar to the psalms of lament, and doubtless owing some of their language and imagery to that source.”

Wright goes on to explain why Jeremiah received so much frenzied hostility and even death threats:

Jeremiah was engaged in a systematic attack upon the key pillars of Israel’s self-identity and worldview. We have seen how he dismantled the people’s confidence in the temple, in the land, in the written law, in circumcision, and now in the very covenant with YHWH itself. None of these things, Jeremiah argued, could provide security from the wrath of God now being unleashed. But all of these things had ancient tradition and profound theological weight behind them. To attack such precious foundational beliefs must have seemed radically undermining of all that the people’s life and faith were built upon. In fact, his relentless attacks probably appeared blasphemous.

This explains why Jeremiah was so alone and so full of grief. Yet his distance from his own people was offset by his nearness to his God. As Willem VanGemeren says of the confessions:

Jeremiah, forsaken and rejected by people, experienced many setbacks during his lengthy ministry, but he gradually adjusted to being a loner. Kings, leaders, priests, and false prophets opposed him. His “confessions” draw us into the personality of the prophet and into his dialogical communion with his God. . . . They are in the form of lament (soliloquies) by which he – like the psalmists and our Lord Jesus in the Garden – struggled with God’s will. . . . In Jeremiah, the suffering servant of God and the spokesman of God are one.

But interspersed in all the suffering and grief due to the people’s sin and God’s judgment are notes of hope. The famous new covenant spoken about in Jer. 31 is one such example. Jesus of course was the fulfillment of what Jeremiah had prophesied about. And like Jeremiah, Jesus knew all about suffering. Yet joy was a part of this.

As we read in Hebrews 12:2, “For the joy set before him he endured the cross, scorning its shame, and sat down at the right hand of God.” In his discussion on the prophetic imagination, Walter Brueggemann finds similarities between Jeremiah and Jesus and their respective ministries. He remarks,

The riddle and insight of biblical faith is the awareness that only anguish leads to life, only grieving leads to joy, and only embraced endings permit new beginnings. . . . Jesus had understood Jeremiah. . . . Jesus’ concern was, finally, for the joy of the kingdom. That is what he promised and to that he invited people. But he was clear that the rejoicing in that future required a grieving about the present order. . . . [This implies] that those who have not cared enough to grieve will not know joy.

These confessions certainly reveal the very real human face of Jeremiah. He was not an aloof, impartial spokesman for God, but one who felt the pathos and the pain. And if we find this in the book of Jeremiah, even more so is it found in the book of Lamentations.

The word of the Lord

Obviously, all of the prophets are spokesmen for God – they are mouthpieces for Yahweh. Thus the word of God and it proclamation is foundational to the prophetic task. But this is especially the case with Jeremiah. And we see in the above two themes how this was not just a job to be done, but a life to be lived.

I could appeal to many experts here to elaborate on this, but given that Andrew Shead has devoted 300 pages to this exact subject (see details below), it will suffice to simply quote from him. These three paragraphs come near the very end of his volume and offer us a good overview of things:

For many pages now I have been writing about the Word in the abstract, and it is easy to forget just how vivid and impassioned this Word is as it pleads, laments, denounces, declaims, suffers, exults, wonders, hopes, destroys, plants, feeds, transforms. Not as a theological construct, but in the most concrete and immediate ways, this Word inhabits the story as a person. This is a person whose fire and ardour, whose patience and longsuffering, whose raw, loving power we feel we would know anywhere.

The Word of God would be a different Word if it addressed his people from a distance, disengaged; to be what it is, it must come to them embodied as one of them, fully engaged with the objects of its address. The Word comes embodied in its prophetic speaker in order that we may know the Word, not the speaker, better. The prophet is a window through whom we look in both directions, and though we can draw a fair sketch of Jeremiah himself, it takes some squinting of the eyes to achieve. The Word of God is a message, made of words, spoken and lived out through a person whose life is an act of divine self-disclosure.

To speak this Word takes more than lips; it needs a life. And in the same way, to hear it takes more than ears. The words do not compel by mere force of logic, but commend themselves to the listener’s appetite. To recognize them as the Word of God is to receive them in obedient trust.

These solid and scholarly works are mainly from conservative, Reformed and evangelical points of view.