Are we now in the end times Scripture speaks about?

Just a few days ago I was asked if I thought we were living in the last days. I get asked this quite often. I replied as I usually do by saying four brief things: In one sense we have been living in the last days for 2000 years now; Jesus said, ‘Occupy till I come;’ yes, things certainly do seem bad right now; and it is possible Jesus could return today, or perhaps in a hundred years.

Since this conversation took place at a second-hand Christian bookstore in Melbourne’s outer east, let me mention something I read in one of the books I purchased there on the day. But first, here is a website for this terrific bookshop: www.findglocal.com/AU/Mooroolbark/927686310590092/New-Life-Books-%26-Archaeology 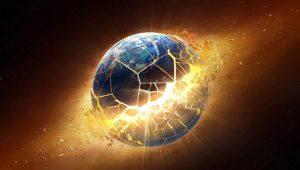 One of four books I got there (and all four were on my most wanted list) was an older volume I have been looking for some years to get a second hand copy of: Mark Noll’s 1992 volume, A History of Christianity in the United States and Canada, a magisterial work of 600 pages.

Sure, a second edition appeared last year, but I am more than happy to have this one. Noll is a top Christian historian, and I have a dozen of his books. I also took a course with him at Wheaton College some decades ago on de Tocqueville’s Democracy in America.

But one of the things that stood out to me as I read through the book was this remark as Noll was discussing the fundamentalist-modernist controversy in the early twentieth century. He wrote: “The fundamentalists who battled liberals and moderates in the 1920s had an ambiguous attitude toward the United States. Sometimes they spoke of it as ‘Babylon,’ far gone in its sins. Sometimes it was ‘God’s New Israel,’ still at least potentially a light to the nations. Often in the 1920s fundamentalists affirmed both.”

This got me thinking. One, just about every generation of Christians over the last 2000 years thought they might be living in the end times, and that their period was the worst. But two, I thought that yes, there have always been bad periods. But in the West, are not things really getting out of control?

So in one sense things really do seem much worse than before – at least in the West. And three headlines that I just came upon moments ago demonstrate this even further. These three articles all are making the same case: The West is going down the tubes fast, and this indeed may be how it all ends. The first piece deals with the radically liberal and leftist church in Sweden:

A new translation of the Holy Bible from the original Hebrew and Greek for children in Sweden is set to also include perspectives on diversity and gender. The new translation is the first in 25 years and will be undertaken by Church of Sweden Bishop Sören Dalevi, who assumed his role as Bishop of Karlstad in 2016. “The starting point was to make a Children’s Bible that has not existed in Sweden before for a very long time. Namely, one that has both the stories, the hymns, the most famous prayers and the Swedish children’s book illustration style, which is very unique,” Dalevi told broadcaster SVT.

Dalevi told SVT that among the gender perspectives will be the notion that man did not perhaps come before woman in the story of Genesis despite the Book of Genesis Chapter 2, verses 21 through 24 being reasonably clear on the point. The Church of Sweden is known as one of the most progressive liberal Christian churches in Europe and has long supported various causes such as the LGBT movement.

Last year, a church in Malmo came under criticism after unveiling an LGBT altar painting which depicted same-sex couples and transgender individuals set at the scene of the Book of Genesis. www.breitbart.com/europe/2020/12/09/new-swedish-childrens-bible-to-have-diversity-and-gender-perspectives/

And Jonathon Van Maren just recently looked at the bigger – and quite depressing – picture in Europe. The article begins:

Over the past several months, pressure on Christians has increased as the beliefs that form the foundation of Western civilization are relentlessly attacked as hateful and bigoted. Norway has just banned “transphobia”; a Finnish parliamentarian is under police investigation for defending traditional marriage; Dutch Christian schools are under attack by the government for teaching the biblical view of sexuality; a German pastor was fined 8,100 euros for statements against LGBTQ ideology. The list goes on. European Christians are increasingly trapped between the pincers of radical secularization and radical Islam.

I recently spoke with Madeleine Enzlberger of the Observatory on Intolerance and Discrimination Against Christians in Europe. Enzlberger, a native Austrian, has a background in conflict management and security politics and conducted field research in Iraq on the persecution of Christians and the promotion of International Religious Freedom Policy.

Are hate incidents against Christians on the rise in Europe?

Hate incidents are rising — not significantly in numerical terms, but the general culture is taking a shift. This means that we do have political and cultural changes that do not only affect Christians but individual freedoms in general. Areas like freedom of speech, conscience and religion are intrinsically linked to each other and restrictions on one can lead to limitations on one of the other freedoms.

Currently we can identify three main areas in which Christians are facing most pressure. The first category is violence, as in vandalism, which is considered a hate crime by the OSCE, against churches or Christian institutions. The majority of the cases we report fall under this category. Sadly, we also have actual physical assaults on Christians, like the recent tragic killing of Christians in the basilica of Nice, but they are very rare. The motive and bias of the perpetrators is very diverse. Among them we find anti-religious, radical feminist and LGBTQ+ groups, or radical Islamists.

The second field in which Christians face most adversities is radical secularization, which we can observe to take place on a political/legal level, but also a shift in general cultural attitudes towards Christians. Here we have cases of new hate speech or equality legislation, which potentially criminalize moral, faith-based arguments or the beliefs of Christians. In these cases, the basic human rights of committed Christians, like freedom of speech and conscience, are subdued under a new secular world view that claims moral authority.

Radical Islamists and radical Islamist groups are the third area of pressure for Christians. In these cases, Muslim converts, specially asylum seekers from the Middle East, are often targeted physically and mentally. Another new problem in this area is the growing phenomenon of hotspots in which radical Islamists or radical groups discriminate, marginalize or even attack Christians. France and the UK are among the countries who struggle most with this problem. www.lifesitenews.com/blogs/the-foundation-of-western-civilization-is-relentlessly-attacked-in-europe

Lastly, to nicely tie all these major themes together (the decline of the West, the war on Christianity, and the possible nearness of the Lord’s return) John MacArthur just offered this warning:

Grace Community Church Pastor John MacArthur has warned that today’s world is “perfectly suited for the Antichrist to come” amid the chaos and “lawlessness” stemming from the COVID-19 pandemic. MacArthur, whose Sun Valley, California-based church has repeatedly sparred with authorities over COVID-19 worship restrictions, said on Sunday that world governments “have done something that’s never been done in human history” by making the pandemic issue and the response “global.”

“Now we are a global world. And that is a setup that we’ve been waiting for through redemptive history since the Lord promised that there would come, in the future, an Antichrist who would have a global government,” the 81-year-old pastor said. “We literally have such power over people globally that we can shut them down so they can’t function,” he said.

“This suits the world of Antichrist. As you look at the book of Revelation, there’s the mark of the beast, the number, and if you don’t have that, you don’t buy, you don’t sell, you don’t exist. Everything about you, they know — the people who have access to all your data. They know all of it. You can go out of existence virtually any moment [and] somebody decides that. This is the kind of world that appears to be perfectly suited for the Antichrist to come, bring a certain amount of peace, [and] the world falls at his feet.”

The article goes on to say this:

The pastor said that while he’s not predicting that “the Lord is coming soon,” the unrest seen today reflect those prophesied in Scripture. “The Bible says in the End Times there will be lawlessness. And there is lawlessness [today] and an escalating lawlessness and an effort to create more lawlessness by taking restraints away,” he said. “This is a world that could find itself in such absolute chaos that the right satanic leader who promises to fix everything could be given the title of king of the world. That Antichrist, aided by the false prophet, is what we see in the book of Revelation. www.christianpost.com/news/john-macarthur-world-perfectly-suited-for-antichrist-to-come.html

So are we in fact just about at the end? It could be. But I will still stick with my four-fold response that I offered above. Yes, things are bad, but we need to keep working for Christ and the Kingdom until he does return. So remain faithful my friends, regardless of how dark things become.

As Christ promised us, the gates of hell will not prevail against the church.