If we do not learn from history, and real soon, we are all toast:

From the what? Hang in there – all will be explained in a moment. First, some background to this piece. The other night I was flicking television channels and came upon a documentary. It was part of a series from the US that I had never seen before. It was a few years old, but may have been aired for the first time here in Australia. 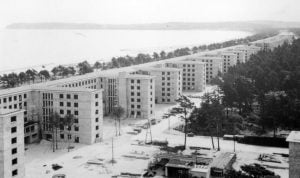 The series is called “Mysteries of the Abandoned.” A blurb on the show says this: “Some of the world’s most incredible engineering projects now lie in ruins. These deserted places are home to extraordinary mysteries and untold secrets, and we revisit them to understand how they were built, and why they were abandoned.” www.sciencechannel.com/tv-shows/mysteries-of-the-abandoned/

The particular episode I watched had four different segments. It was the third one, and what was said at the end of it, that really got my attention. It was called “Nazi Ghost Town” and had to do with a massive structure built by Hitler. I found a video of this online, watched it again and took some notes. I also did some further online research on this.

Here is what the Prora Complex was all about: it was a Nazi propaganda and indoctrination centre in northern Germany on the Baltic Sea. It was built during 1936-1939 and was a top-secret project. The 2.8-mile-long building complex was 6 stories tall. It had over 10,000 rooms that could hold 20,000 people in eight giant accommodation blocks.

The site never went into full operation: with the onset of World War II in 1939 construction workers were transferred elsewhere. But what the Nazis had in mind for it was sinister indeed. It was to be a mind control centre to create a master race that thought like the Nazis thought. It was sold to German workers as a wonderful holiday location. It promised Germans a terrific retreat by the seaside, but it was really a massive indoctrination centre.

It was to feature a monumental auditorium that could hold all 20,000 German workers staying there. It would really have a hypnotic effect – it was just so grand, just like the image of the Aryan race. It was a very impressive structure that would function like the Nuremberg rally arena. It was all about the manipulation of the masses.

The Complex was to have all-day programs to keep the Germans busy. The doco mentioned “Kraft Durch Freude” (“Strength through joy” – known as the KdF for short), a program led by top Nazi Robert Ley. One history site says this about it:

The doco I watched said similar things. It was a mass political propaganda endeavour: it seemed to be a subsidised holiday break for millions of low-paid industrial workers. But it was really designed to unite them fully behind Hitler and to brainwash them for war and sacrifice.

The truth is, the Nazis needed propaganda for the Third Reich to succeed. It was all about uniting the people to Hitler – they had to have everyone to be on board in order to be successful. As the doco narrator said, they needed “an ideological way of making people feel really happy about giving 100 per cent of their free time being indoctrinated with:
-‘Aren’t we the greatest’
-‘Isn’t it worth the suffering?’
-‘Shouldn’t we all be in this together?’”

It was those last lines that really got me thinking about things today. Most of 2020 I have been trying to sound the alarm about how power-drunk rulers and states have used corona alarmism to massively increase the size and scope of government, and to take away individual freedoms.

Some of my many pieces on this explicitly looked at some parallels with what happened in Germany in the 30s. See these two articles for example: billmuehlenberg.com/2020/10/15/statism-and-crises-learning-from-20th-century-germany/

But the idea of brainwashing the masses, convincing them of a grand cause set over against some great evil, and the need to convince us all to make whatever sacrifices are necessary does sound so very 2020-ish. The corona alarmists and the political- and media-led hysteria about it has resulted in a massive increase in the powers of the State, and a corresponding decrease in individual freedoms of all kinds.

Even the same phrases and concepts have been heard repeatedly this year: ‘We are all in this together’ and ‘We must be willing to make these sacrifices for the greater good’ etc. The ability of our leaders and the media to get the masses to so willingly and easily lay down their rights and freedoms to beat the Rona has been frightening to behold.

So many folks like sheep to the slaughter simply went along with everything the various ‘experts’ told them, no matter how often and how glaringly they contradicted each other, and even themselves. Various chief medical officers who were nobodies last year now found themselves being given celebrity status as they and various premiers did their daily briefings, often to scare us witless.

No matter how ludicrous and how unscientific and how un-medical their ideas were, the masses went right along with all of it, and lapped everything up. Even today I still see folks walking around in the middle of nowhere with their masks on. Fear and paranoia have utterly immobilised and lobotomised far too many people.

Our leaders have certainly learned one very invaluable lesson this year: the masses are utterly pliable and fully able to be moulded however the elites want them to be moulded. They will basically do anything they are told if they think it will keep them ‘safe’.

Now in drawing parallels here, I am not saying that every political leader and media outfit today are reincarnations of the Nazis. I did not say that. But I have been saying all year that we MUST learn from history. We must see what has happened before, in order to hopefully not repeat the same mistakes.

Political leaders know full well the value of mass propaganda and indoctrination, and the place of fear. That was clear in Germany in the 30s. And we have seen far too many similarities all around the world this year. It really is frightening.

Thankfully the Prora Complex was never finished and used for its nefarious purposes. Indeed, today it is being turned into a resort where people can live in fancy refurbished apartments, with tennis courts, a swimming pool and a shopping centre part of the ongoing redevelopment.

But if one of the most well-educated, culturally-advanced, and civilised nations on earth could use things like this for such evil ends just 90 years ago, there is no guarantee that similar things will not occur today – all for our own good of course.

BTW, the 42-minute documentary which I saw – which was first aired on 20 April 2017 in the US – can be seen here: www.dailymotion.com/video/x5ryvy1

13 Replies to “Lessons from the Prora Complex”