Why do I suspect that most Christians have given this Old Testament book a wide berth, and never bothered to read it? While perhaps most Western Christians may not have even read the entire OT, many would be put off by this book simply because of its title.

Too many Christians today want only the happy-clappy stuff, the cheerful stuff, and the positive stuff. Anything that seems to be negative or hard or downbeat will send them heading to the hills. But this brief (five chapter) book is part of the inspired Word of God, and contains so very much important spiritual truth.

While most Christians would love singing the great hymn, “Great is Thy Faithfulness,” how many even realise that it comes directly from this book (Lam. 3:23 to be precise)? Thus we need to go back and read this book – perhaps for the very first time.

The lament is fully understandable if we are aware of the context. Something incredible has just happened which had left the surviving people of Judah in a state of shock. In 588-587 the Babylonians laid siege to and destroyed Jerusalem and the temple, killing many and sending many others into exile in faraway Babylon (see Jeremiah 52 eg.).

The terrible destruction, carnage and suffering are described in great detail in this book. It was horrific in the extreme, with graphic language describing graphic realities. As Tremper Longman comments, “The language is vivid and intense; the reader can almost smell the smoke from the smouldering buildings, see the bodies lining the street, and, most poignantly, hear the cries of the children.”

Beyond the horrible physical realities were even more shocking spiritual realities: how could this happen to God’s people? “We are God’s chosen people? We thought we were inviolate and unassailable!” They really did think that they were indestructible. They thought that since the temple was there, they could never suffer harm.

But Jeremiah and other prophets had warned for a long time about judgment to come if they did not repent of their sins. And the Northern kingdom had already fallen to the Assyrians in 722. Yes, Yahweh had miraculously preserved them in 701 B.C. when the Assyrian king Sennacherib had threatened Jerusalem (2 Kings 18-19).

But these folks thought they were free of any negative outcomes. They felt (rightly) that Yahweh was a Divine Warrior who fought against her enemies. What they forgot was that this same Yahweh sometimes fought against Israel.

As John Mackay notes, “In absolutizing the promise of the covenant, they had forgotten the two-sided nature of the covenant relationship and so neglected the need for loyal commitment and obedience as their response to the blessings conferred on them. Repeated breaches of their covenant obligations had led inexorably to the withdrawal of God’s protection from them.”

Yes, how wrong they were. This was a tragedy of enormous proportions. The unthinkable had happened, and it was devastating. Consider simply the first five verses of Lam. 1:

How deserted lies the city,
once so full of people!
How like a widow is she,
who once was great among the nations!
She who was queen among the provinces
has now become a slave.
Bitterly she weeps at night,
tears are on her cheeks.
Among all her lovers
there is no one to comfort her.
All her friends have betrayed her;
they have become her enemies.
After affliction and harsh labor,
Judah has gone into exile.
She dwells among the nations;
she finds no resting place.
All who pursue her have overtaken her
in the midst of her distress.
The roads to Zion mourn,
for no one comes to her appointed festivals.
All her gateways are desolate,
her priests groan,
her young women grieve,
and she is in bitter anguish.
Her foes have become her masters;
her enemies are at ease.
The Lord has brought her grief
because of her many sins.
Her children have gone into exile,
captive before the foe.

Of course elsewhere in the OT we read about the grieving and lamenting over fallen Jerusalem, as in Psalm 137:1-6:

By the rivers of Babylon we sat and wept
when we remembered Zion.
There on the poplars 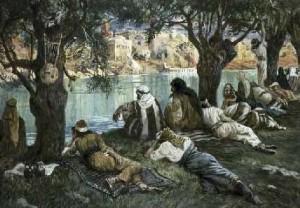 we hung our harps,
for there our captors asked us for songs,
our tormentors demanded songs of joy;
they said, “Sing us one of the songs of Zion!”
How can we sing the songs of the Lord
while in a foreign land?
If I forget you, Jerusalem,
may my right hand forget its skill.
May my tongue cling to the roof of my mouth
if I do not remember you,
if I do not consider Jerusalem
my highest joy.

All five acrostic poems in the Book of Lamentations contain such gloom and misery, except for one amazing exception. As mentioned, in the very centre of the book, in the centre of chapter 3, there are wonderful words of hope and comfort. Despite everything that has happened, the writer can still say this in 3:21-26:

Yet this I call to mind
and therefore I have hope:
Because of the Lord’s great love we are not consumed,
for his compassions never fail.
They are new every morning;
great is your faithfulness.
I say to myself, “The Lord is my portion;
therefore I will wait for him.”
The Lord is good to those whose hope is in him,
to the one who seeks him;
it is good to wait quietly
for the salvation of the Lord.

Even in the darkest periods imaginable, there is still hope. Even in the just judgment of God, there is still always a glimmer of grace and a good end. But we must take the messages of Lamentations seriously – the good and the bad. “Divine sovereignty, justice, morality, judgment, and the hope of blessing in the distant future” are some of the themes found in this book, as R.K. Harrison writes.

Indeed, there is application to be found here for New Testament believers. Among other things, we must realise how familiar Jesus was with lamentation and suffering. As Christopher Wright states in his new commentary:

Jesus not only wept, like Lady Zion, over Jerusalem, like her he also suffered desertion by his friends, mockery from his enemies, and apathy from passers-by. Like her, he was stripped naked, publicly exposed and humiliated, with none to comfort. Like her, he suffered all this at the hands of an implacable foreign enemy wielding idolatrous imperial power through blood and brutality. Was there, indeed, any sufferings like his, that the Lord laid on him in the day of his fierce anger?

And F. B. Huey offers some contemporary application from this important book:

1) The wickedness of any people will eventually result in the disintegration of that society; 2) we should never take God’s past blessings as assurance that they will continue when we continue to sin; 3) our nation and our churches are subject to God’s judgment when they are no longer faithful; 4) God fulfils his word; 5) though many solutions for human suffering have been proposed, ultimately the only satisfactory way to deal with it is through deep and abiding faith in God in spite of the circumstances.
God is patient and compassionate, not willing that any should perish (2 Pet 3:9; 1 Tim 2:4); but when all warnings are ignored, nothing remains but his judgment. We should never presume upon God’s mercy and compassion. The Book of Lamentations contains the implied warning that sometimes it is too late to weep and repent; nonetheless, God is always faithful (3:23).

Much more can be said about this vital book. As Paul reminded us in 2 Timothy 3:16-17, “All Scripture is God-breathed and is useful for teaching, rebuking, correcting and training in righteousness, so that the servant of God may be thoroughly equipped for every good work.” And that includes the Book of Lamentations.

If you have not read it yet, I encourage you to do so now. And if you already have, why not read it again?

6 Replies to “The Book of Lamentations”