If God chose Moses, why did he seek to kill him?

This certainly is a difficult passage, one that appears abruptly in a narrative about Moses, and leaves many readers scratching their heads. The immediate context is the return of Moses to Egypt to confront Pharaoh and to help bring about the release of the Israelites, after he was in the wilderness for 40 years. 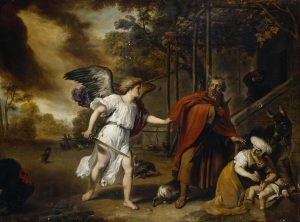 The actual fuller passage under question is Exodus 4:24-26: “At a lodging place on the way the Lord met him and sought to put him to death. Then Zipporah took a flint and cut off her son’s foreskin and touched Moses’ feet with it and said, ‘Surely you are a bridegroom of blood to me!’ So he let him alone. It was then that she said, ‘A bridegroom of blood,’ because of the circumcision.”

So what is that all about? God wanted to kill Moses – after he just commissioned him to go and challenge Pharaoh? And what is the circumcision stuff all about? As one Scottish commentator put it over a century ago, these are the “three most obscure and most mysterious verses in Moses’ history.”

But getting some background to this whole episode can help us a great deal in understanding what is going on. Around forty years earlier Moses had fled Egypt after killing an Egyptian. He came to stay with the Midianite Jethro, and he married one of his daughters, Zipporah. They had two sons. You can read about this in Ex. 2:11-22.

Because she was not a believer, it seems she objected to Israelite religious practices, so the sons were not circumcised. (Other cultures did however do certain forms of circumcision back then.) This was a serious matter indeed. Back in Genesis 17 we read about how Abraham was given the covenant of circumcision. Verses 9-14 say this:

Then God said to Abraham, “As for you, you must keep my covenant, you and your descendants after you for the generations to come. This is my covenant with you and your descendants after you, the covenant you are to keep: Every male among you shall be circumcised. You are to undergo circumcision, and it will be the sign of the covenant between me and you. For the generations to come every male among you who is eight days old must be circumcised, including those born in your household or bought with money from a foreigner—those who are not your offspring. Whether born in your household or bought with your money, they must be circumcised. My covenant in your flesh is to be an everlasting covenant. Any uncircumcised male, who has not been circumcised in the flesh, will be cut off from his people; he has broken my covenant.”

So here was Moses, heading back to Egypt to deliver God’s people out of bondage, but he had failed in carrying out this crucial command. So God intervened. It seems he struck Moses down with some sort of potentially fatal disease.

Whether God works through secondary sources and means (such as an illness or disease), he is still ultimately behind all things, accomplishing his purposes. Thus he could be said to be seeking to kill Moses. Indeed, we see similar things earlier on when Moses was complaining about not being eloquent of speech: “Then the Lord said to him, ‘Who has made man’s mouth? Who makes him mute, or deaf, or seeing, or blind? Is it not I, the Lord?’” (Ex. 4:11).

So God struck him down, and it was left to his wife to carry out the circumcision, something she was perhaps not very happy about (although other understandings of the Hebrew text are possible here). Once that procedure was finished, Moses evidently recovered, and he could go on to do the work God had called him to do.

To round out the story, Moses went on to Egypt to confront Pharoah while his wife and sons went back to Midian. But as we read in Ex. 18, they and his father-in-law Jethro are eventually reunited with him after the miraculous exodus took place.

That in brief is how we are to understand this puzzling episode. Let me offer the thoughts of a few commentators here, then conclude with a bit of practical application for believers today. In his commentary on Exodus Victor Hamilton lists not one or two but nine major questions that can be asked of these three short verses. I will not deal with them all here, but they show what an enigmatic passage this is.

Alec Motyer offers some helpful considerations, if this was indeed some sort of illness Moses had been afflicted with:

Probably, it seemed at first sight to Zipporah that Moses was suffering a seizure or some other illness that had every appearance of being fatal. Presently, however, she realized that its cause was not physical but spiritual, and not demonic but divine. The Bible carefully avoids the two extremes of saying that every sickness is an oppression from God and of saying that no sickness is an oppression from God. We must face every illness and ailment with the upward look and the question, ‘Lord, what is in this as between you and me?’

The lessons for us today should be clear. Even if we have a clear sense of God leading us to do his work, it is always dependent upon our obedience. If we do not do all that God asks of us, we risk losing out on the assigned task we have been given.

No matter how great someone may seem to be in the church, in leadership, and in the mission of God, obedience is always crucial. And lest we think that some are making too much of obedience, let me return to Moses. Despite what had happened to him, it seems he really did not learn this lesson. As we read in Numbers 20:7-12:

And the Lord spoke to Moses, saying, “Take the staff, and assemble the congregation, you and Aaron your brother, and tell the rock before their eyes to yield its water. So you shall bring water out of the rock for them and give drink to the congregation and their cattle.” And Moses took the staff from before the Lord, as he commanded him. Then Moses and Aaron gathered the assembly together before the rock, and he said to them, “Hear now, you rebels: shall we bring water for you out of this rock?” And Moses lifted up his hand and struck the rock with his staff twice, and water came out abundantly, and the congregation drank, and their livestock. And the Lord said to Moses and Aaron, “Because you did not believe in me, to uphold me as holy in the eyes of the people of Israel, therefore you shall not bring this assembly into the land that I have given them.”

Instead of just speaking to the rock, he gave a speech to the people and struck it twice. ‘No big deal,’ you might think. But it was to God. This is the old Moses once again seeking to do things his own way in his own strength. He had tried that 80 years earlier in killing the Egyptian.

Two things become clear from these two episodes. If God calls us to do a work for him, he does not take lightly our disobedience and refusal to take seriously what he requires of us. In the first instance, God was even willing to give Moses the flick, and find someone else to do the job.

Sure, Moses was a great leader and mightily used by God, but he almost missed out on this vital assignment. Also, if God does use us – by his grace – we can still miss out on some very real blessings because of our disobedience. Imagine how much Moses would have desired to enter into the promised land.

That was the real reason for the exodus: to take possession of the land promised to the forefathers. But this tremendous blessing was denied to him because of his disobedience. So we really need to take this matter seriously. God is not to be trifled with. As we read in The Lion, the Witch and the Wardrobe by C. S. Lewis:

“Aslan is a lion- the Lion, the great Lion.” “Ooh” said Susan. “I’d thought he was a man. Is he – quite safe? I shall feel rather nervous about meeting a lion”…”Safe?” said Mr Beaver …”Who said anything about safe? ‘Course he isn’t safe. But he’s good. He’s the King, I tell you.”