The church is always at risk of being undermined by another gospel:

Sadly, not everyone who claims to be a Christian is one. While all true Christians should seek for unity where possible, and allow for various differences on some less important issues, there can be no unity with those who end up denying the Christian faith in various ways. 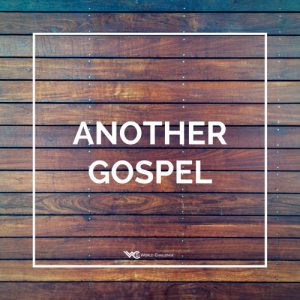 We are seeing this occurring increasingly at the present moment, and we have seen it occur before. Theological liberalism has been around for a while now, and today we see it more and more being brought into what are supposed to be evangelical, Bible-believing churches.

Today we have what are called “progressive” Christians, various social justice warriors, and woke religious leftists. They are doing much the same as the older theological liberals did a century ago. I have spoken before about how radically different these groups are from biblical Christianity. It is not just a rather heterodox gospel – it is another gospel.

The Apostle Paul of course warned us about those who would preach another gospel, and proclaim another Jesus (see for example 2 Corinthians 11:4). We see this happening quite a lot today in the evangelical world. Many on the left have decided that religious conservatives such as myself are somehow the enemy, and our views must be directly challenged.

There are those who really have been running with another gospel. As with the older liberals, the new leftists happily use biblical terminology, but strip the words and concepts of their biblical content, and replace them with various leftist agenda items.

As to the very real problems of progressive Christianity, see this article: billmuehlenberg.com/2011/01/23/progressive-christianity/

And as to the older theological liberalism and how it relates to today’s religious left, see this piece:

A key figure that I often appeal to in this regard is J. Gresham Machen (1881-1937). He was a leading light in standing up for biblical Christianity, showing conclusively how liberal theology is NOT in any way similar to it. His major volume on all this was the 1923 book, Christianity and Liberalism.

I have often quoted from that book. Let me again repeat a few notable passages, all from his introductory chapter:

“But manifold as are the forms in which the movement appears, the root of the movement is one; the many varieties of modern liberal religion are rooted in naturalism, that is, in the denial of any entrance of the creative power of God.”

“[W]hat the liberal theologian has retained after abandoning to the enemy one Christian doctrine after another is not Christianity at all, but a religion which is so entirely different from Christianity as to belong in a distinct category.”

“[D]espite the liberal use of traditional phraseology modern liberalism is not only a different religion from Christianity but belongs in a totally different class of religions.”

“[L]iberalism in the modern Church represents a return to an un-Christian and sub-Christian form of the religious life.”

As I say, we see the same battles taking place today. But instead of liberalism taking over the mainstream denominations of last century, we now have radicalism attempting to take over evangelical churches and denominations.

Many others have been warning about this worrying trend. One brand new piece on this just appeared today which is worth sharing from. It concerns Egyptian-American Michael Youssef, the 72-year-old pastor of a major church in Atlanta, Georgia.

The piece features an interview with him, and is entitled “’Woke’ culture creeping into evangelical church is ‘deadly’ for the Gospel of Christ”. His message is based on his new book, Hope for This Present Crisis: The Seven-Step Path to Restoring a World Gone Mad. Here is part of the interview:

[He] recalled how, as an Episcopal priest in the 1980s, he watched with dismay as the mainline Episcopal denomination slowly moved away from biblical principles, eventually voting to approve same-sex marriage in the denomination. But in recent years, Youssef told CP that he’s seen the same subtle bend toward leftist ideology slowly permeating the wider evangelical church.

“Those same battles that I fought in the mainline denominations are now invading the evangelical churches,” he said. “It’s the same arguments, the same lingo, and the same words repeating themselves with such precision I am deeply, deeply concerned.” According to Youssef, who also founded the Leading The Way television ministry, more and more pastors are “falling into the trap” of woke culture because it’s “popular and appeals to the flesh.”

“Bowing to woke culture allows you to avoid rejection by culture and society,” he said. “It’s a very, very popular message that is now being preached from many evangelical pulpits; traditionally Bible-believing, Gospel-preaching churches. We have gone so far that it just grieves me to the point that I literally sometimes just weep tears.”

“I’ve always believed, as goes the pulpit, so goes the pew. As goes the pew, so goes the culture,” he continued. “As a pastor, I put the full blame on us, right in our laps, because we want to be liked, loved, and followed on social media by millions of people. Pastors are the culprits. We need to be about Jesus, not about being liked, because that is deadly as far as the Gospel of Jesus Christ is concerned.”

His heart, he told CP, is especially burdened for young pastors and ministry leaders who are tempted to waver from biblical truth amid societal pressure. “Young pastors must realize that this is a deception. It’s very subtle and very clever, but it’s a deception nonetheless,” he continued. “And that is the burden that God laid on my heart to such a point I just couldn’t sleep. I had to address it. I believe people are in a state of confusion and need a clear word from Scripture.”

Youssef, who was born on the African continent, said that one example of bowing to woke culture is the increased popularity of Critical Race Theory, even in the Church. The theory utilizes race as the lens through which every area of life is examined, categorizing everyone into oppressor and oppressed groups.

“It’s a very Marxist ideology that people are taking very seriously,” he said. “The idea of the oppressed and the oppressors is not that simple. Now we have private Christian schools here in Atlanta where white children are apologizing to black kids. Apologizing for what? They are innocent; they haven’t done anything. It’s crazy; it’s just going insane.”

Amen brother. I am glad that some are speaking out. Just as vital voices like Machen were needed a hundred years ago to take on the main challenges to the gospel, so too today we need brave Christians willing to stand up and challenge the inroads of various forms of destructive liberalism which is eroding the core of the Christian faith.

Thank you Michael for taking a stand. Who else will stand up and be counted?