OK, so this article is not entirely about this Hollywood power and glamour couple, but I did get your attention right? So now that I have it, please read on, since it does have a fair amount to do with Brad Pitt at least, and especially his mother, and even some to do with Angelina Jolie. 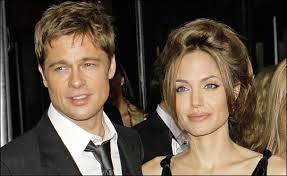 By now most of you would have heard of the major controversy which has arisen because of some remarks made recently by Jane Pitt, Brad’s mother. Indeed, all hell seems to have broken out because she dared to suggest that Christians should not be voting for Obama for president.

Her letter appeared in a newspaper on July 3. It said this: “I have given much thought to Richard Stoecker’s letter (‘Vote for Mormon against beliefs,’ June 15). I am also a Christian and differ with the Mormon religion. But I think any Christian should spend much time in prayer before refusing to vote for a family man with high morals, business experience, who is against abortion, and shares Christian conviction concerning homosexuality just because he is a Mormon.

“Any Christian who does not vote or writes in a name is casting a vote for Romney’s opponent, Barack Hussein Obama — a man who sat in Jeremiah Wright’s church for years, did not hold a public ceremony to mark the National Day of Prayer, and is a liberal who supports the killing of unborn babies and same-sex marriage. I hope all Christians give their vote prayerful consideration because voting is a sacred privilege and a serious responsibility.”

Way to go Jane! She is 100 per cent right in everything she wrote. Foolish Christians who think they can just sit out this American election will have blood on their hands big time. And anyone who calls himself a Christian who dares to vote Obama back in also will have blood on his hands.

So she was absolutely correct in everything she said. And for daring to share her Christian beliefs in public, the homosexual hate squad in particular, and the secular left anti-Christian bigots in general, have come out in force big time. One article offers a bit of background here:

“Obama has been labeled the ‘abortion president’ because of his radical views on the ‘right to choose’. His pro-abortion views are so extreme that he has even opposed protections for victims of failed abortions who are born alive. As a state senator in Illinois, he voted against a bill that would require abortionists to provide care to an infant who is born alive during the course of a failed abortion. The legislation was brought forward after Jill Stanek, a nurse at Christ Hospital in Oak Lawn, exposed abortionists’ practice of abandoning babies born alive after failed abortions, leaving them to die in a hospital utility room.

“In January, he marked the 39th anniversary of Roe v. Wade by praising the ‘fundamental constitutional right’ to abortion. Obamacare, his hallmark legislation that was upheld last week by the Supreme Court, has been called the largest expansion of abortion since Roe v. Wade.

“Jane Pitt’s letter has generated controversy in part because Brad Pitt is known for his liberal views on social issues—he and partner Angelina Jolie famously vowed not to marry until all same-sex couples could as well—and only months ago he backed Obama in an interview with The Hollywood Reporter. ‘I’m an Obama supporter, no question,’ he said.”

The hate mail and death threats – as expected – have been pouring in hot and heavy. Another report says this: “After news of her letter broke, Twitter lit up with messages such as ‘kill the b—h’ and ‘Brad Pitt’s mom, die.’ She has since declined media comment, something many speculate is motivated by fear for her safety.”

Yep, more sweetness and light from the tolerance brigade. Just what we have come to expect from those who scream the most about the need for acceptance, tolerance and openness. And the story has taken more turns since then. “Academy Award-winning actor Jon Voight, the father of Angelina Jolie, said he stands with Jane Pitt, who has received death threats since publishing her views supporting the rights of the unborn and traditional marriage—and opposing President Barack Obama.”

But wait, there’s more: “She is soon to be her daughter-in-law. But Angelina Jolie is not exactly seeing eye-to-eye with Brad Pitt’s mother Jane. In fact the actress is reportedly ‘mortified’ by her. The 37-year-old Tomb Raider star was apparently left outraged after her future mother-in-law urged readers of a local Missouri newspaper to vote against President Barack Obama because of his support of gay marriage.”

There you go – here is a case of sane, moral and rational parents disagreeing with their immoral, irrational and radical lefty kids. Go Jane! Go Jon. Boo Brad. Boo Angelina. Columnist Michelle Malkin offers a bit of common sense and rationality on this entire brouhaha:

“Hilton angrily scrawled across a photo of Mrs. Pitt with her son: ‘A vote for Romney is a vote for God.’ After taking obligatory potshots at Christians, Hilton, who calls himself the ‘queen of all media,’ fumed: ‘Ugh! How can one woman birth such a beautiful boy, but have such unattractive views???’

“You want ugly? Hilton knows ugly. He’s the same trash-mouth blogger and former beauty pageant judge who attacked Miss USA contestant Carrie Prejean with misogynistic profanities in 2009 because she said she opposed legalizing gay marriage at the federal level in favor of states’ rights to put the question up for a vote. ‘She lost not because she doesn’t believe in gay marriage,’ Hilton railed. ‘She lost because she’s a dumb bitch!’

“You want ugly? When word of Mrs. Pitt’s letter spread on social media late last week, Twitter lit up with a stream of death threats, smears and slurs. My Twitter curation site, Twitchy.com, compiled just some of the vile bile aimed at Mrs. Pitt for supporting traditional values and standing up for the unborn:

“‘BRAD PITT’S MOM WROTE AN ANTI-GAY PRO-ROMNEY EDITORIAL. KILL THE B***H.’
‘Brad Pitt’s mom, die’
‘F*** you, Brad Pitt’s mom. The gay community made your kid a star, you whacko.’
‘Brad Pitt’s mother…what a brainless old b***h…’
‘Brad Pitt’s Mom Slams Obama, Gays. That stand makes her a deluded, dumba** Fascist Repuke’
‘I hope Brad Pitt has been supporting his mother and decides to cut her off. What a b***h.’
‘Brad Pitt’s mom can choke on a (redacted).’

“The usual civility police were in their usual place when the No H8 bullies mauled Mrs. Pitt: nowhere to be found.”

She concludes with these spot-on remarks: “The overwhelming majority of Hollywood libs live in a fantasyland bubble where every Obama critic is a racist, every pro-life activist is a terrorist and every defender of traditional marriage is a Neanderthal. Hold a mirror up to their hatred, and they’ll call it an incitement to hatred.

“Ironically, the iconic ‘No H8’ campaign logo features celebrities with their mouths taped shut with duct tape to symbolize how they’ve purportedly been silenced. It’s classic psychological projection from the practitioners of repressive tolerance.”

Exactly right Michelle. It does not matter who you are – if you dare to express a differing point of view from the secular left militants and the pink mafia, you will be hunted down and destroyed. That is simply how the tolerance brigade operates.

You better keep Jane and Jon in your prayers. It sounds like they sure need it right now. Millennia ago someone else was crucified for his unpopular views, and I am sure these lefty trendies who oppose the death penalty would be happy to make an exception in some of these cases.