The Bible says so very much about the deceptive nature of riches. As we have seen, the Old Testament speaks to this constantly. The New Testament is equally concerned about the dangers of wealth. Only some representative examples can be given. Jesus of course had much to say on the subject.

Mark 10:17-27 is the familiar story of Jesus and the rich young ruler. The point of the story is not that riches and Christian discipleship are necessarily incompatible, but that anything which becomes a god (which wealth often does) must be renounced before the true God can be followed. 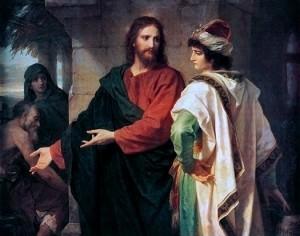 As D. A. Carson writes, because of his wealth, the young man “had a divided heart. His money was competing with God; and what Jesus everywhere demands as a condition for eternal life is absolute, radical discipleship.” This is the big danger of riches – it leads to a false sense of security and self-reliance.

James Edwards says this, “Jesus does not teach or uphold poverty as an ideal, but he does, as here, regard the awareness of need that results from poverty as a blessing. The greatest enemies to faith and obedience are self-satisfaction and pride, and nothing removes those bulwarks more effectively than poverty.”

All three synoptic gospels include Jesus’ words about how hard it is for the rich to enter the kingdom of God. We are told his listeners were astonished at this remark. Most of the commentaries point out that they had good reason to be so astonished. The Jews of Jesus’ day presumed that wealth was a sign of God’s blessing. But even if such a concept appeared in the OT, Jesus redefines it, alters it. Thus we again see an example of Jesus’ upside-down kingdom.

Again the emphasis is not on riches per se, but on their ability to lead people away from God. R. V. G. Tasker says, “Jesus does not say that it is impossible for a rich man to enter God’s kingdom; and from Zacchaeus onwards there has been a long line of rich men who have devoted their wealth to the service of God and their fellow men. But, because great wealth enables a man to shut himself away from his fellows … it is more difficult for him than for others to enter the narrow gateway leading to eternal life.”

One also has to account for such passages as Luke 6:20: “Looking at his disciples, he said: ‘Blessed are you who are poor, for yours is the kingdom of God’.” The context of Luke makes it clear that material poverty is in view. As John Nolland comments:

“In the Lukan text the best starting point for the identification of the ‘poor’ is in v 24 with its reference to the ‘rich’ to whom the poor are the antithesis. There can be little doubt that the rich in v 24 are the literal rich, who are, however, addressed not simply in relation to their material prosperity, but rather in view of the personal orientation that almost inevitably accompanies such material prosperity. In v 20 the ‘poor’ will be the literally poor who presently have a hard life (thus the hunger and weeping of v 21).”

Many other NT passages can be examined, but just a few will have to do. Perhaps one of the more important is 1 Timothy 6:5 which speaks about false teachers “who have been robbed of the truth and who think that godliness is a means to financial gain”. One cannot help but think of this verse when watching the prosperity televangelists in action. The constant appeal to money, the luxurious settings of the TV sets, the lavish lifestyles they live, all remind one of this verse.

Peter likewise issues some stern warnings about the misuse of wealth. He cautions his readers about certain false teachers who “in their greed … will exploit you with stories they have made up” (2 Pet. 2:3). Says Richard Bauckham, they “make a good financial profit out of their followers, who are taken in by their teaching and contribute to their support.”

Such a word should give all Bible teachers and preachers cause for concern. Indeed, Paul specifically contrasts his life and ministry with these false teachers: “Unlike so many, we do not peddle the word of God for profit” (2 Cor. 2:17).

Also worth noting is 1 Timothy 6:9,10: “People who want to get rich fall into temptation and a trap and into many foolish and harmful desires that plunge men into ruin and destruction. For the love of money is a root of all kinds of evil. Some people, eager for money, have wandered from the faith and pierced themselves with many griefs.”

Most commentators point out two ways in which this passage is often misinterpreted. First, the love of money, not money itself, is the cause of the problem. Secondly, it is a root of all evil, not the only root. But even with these provisos, William Mounce is right to make this claim about the passage: “This is one of the most powerful condemnations in Scripture of the destructive lure of possessions.”

Paul seems to especially have in mind those involved in the commercialisation of religion; it is not just the desire to get wealthy, but the exploitation of religion for material gain. In his comment on this passage Philip Towner is right to note: “Nowadays it is difficult to decide which is more dangerous – the love of money in a materialistic society or the Christian’s rationalization for joining in the chase.”

Says J. N. D. Kelly, “His warning is for ‘those who want to be rich’,’ i.e. those who have fixed their desires on material wealth and made it their overriding motive; again he is probably thinking of the sectaries and their view of religion as a profitable enterprise.”

Thus the message of this passage is especially applicable to our present discussion. Prosperity teachers may not love money, but one gets the strong impression that wealth, and its acquisition, is placed on a pretty high pedestal. Moreover, their teaching seems to appeal to a person’s greed. It seems to create a discontent in those who are not wealthy. Constant exposure to the prosperity message can only cultivate a longing for wealth, an expectation of wealth, a desire for wealth. It is this very desire for wealth which James condemns.

As Donald Guthrie writes, “Strong words are used in the description of those whose desires are set upon the acquisition of wealth. The words apply to all whose aims are controlled by the passion to increase material possessions, yet there is no condemnation of such possessions in themselves. The apostle is not so much thinking of those already rich, as those ever grasping to become so.”

Or as Gordon Fee put it, grasping to become rich seems to be the only logical outcome of a steady diet of, and exposure to, prosperity teaching: “Paul’s point is that the very desire for wealth has inherent spiritual dangers.”

The epistle of James is a book which is replete with warnings about riches. Indeed, four out of five chapters contain warnings about the dangers of riches. One passage worth looking at is James 2:1-9. Especially significant for our present purposes is v. 5: “Listen, my dear brothers: Has not God chosen those who are poor in the eyes of the world to be rich in faith and to inherit the kingdom he promised those who love him?”

Unlike much of the prosperity gospel which equates material wellbeing with God’s favour and blessing, James takes a much different approach. Indeed, God’s blessing seems to especially rest on the poor. As Douglas Moo expresses it, “Christians, however poor in material possessions they may be, both possess spiritual wealth presently and anticipate greater blessings in the future. It is from this spiritual vantage-point, not the material, that Christians should judge others.”

Once again such warnings are not meant to be taken as a carte blanche condemnation of all riches, just the misuse of riches. Says Tasker, “Neither here nor elsewhere in the New Testament are the rich denounced merely for being rich, but rather for yielding so readily to the temptations to which the rich are especially prone.”

And that is something we must constantly keep in mind. So we can be thankful if God does bless us with financial abundance, but we must be very careful with it. We must all take with extreme seriousness the plenteous warnings found in Scripture about wealth and riches. Far too many people have shipwrecked their faith and/or lost it altogether by not carefully heeding these warnings.

Part One of this article can be found here: billmuehlenberg.com/2014/06/10/warnings-about-riches-old-testament/