If ever there was a subject which is almost universally surrounded in falsehoods, deception and misinformation, it is the topic of homosexuality. So powerful is the homosexual juggernaut that very few media outlets are left which will dare to challenge anything it claims.

Not only is the lamestream media pretty much useless here, but the activists have done a great job of taking over the schools, the judiciary, the political sphere, and even the corporate arena. There is almost nothing that takes more courage today, and features more risks, than daring to publicly resist the radical homosexual agenda. 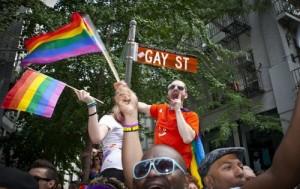 My new book which will soon be out documents hundreds of cases of the gaystapo in action – and it sure ain’t pretty. No wonder hardly anyone is willing to speak up and challenge this activist movement. But fortunately there are a few brave voices yet which have not bowed to the activists’ agenda, and are willing to speak truth, even if very costly to do so.

Let me cite a few of these recent voices. And sometimes they come from rather unexpected quarters. One very interesting piece recently appeared by a homosexual historian. In it he argues that nobody is ‘born that way,’ and offers a lengthy case to make his point. David Benkof says in conclusion:

Of course, none of this means people don’t have sexual orientations today, it just means sexual orientations are specific to our culture, and thus not basic human nature. In tech-speak, that means being gay is in the software of some people’s lives, but it’s in nobody’s hardware.
The compelling evidence nobody’s born gay doesn’t necessarily have to shred the LGBT agenda. Legitimate reasons for more liberal attitudes and policies regarding gays and lesbians still exist, such as freedom of association, the right to privacy, and respect for other people’s experiences. But those who demand social or political change because gays are born that way just don’t know much about history.

And also quite revealing is the recent announcement by the Royal College of Psychiatrists that people are not actually born homosexual. Instead, “sexual orientation is determined by a combination of biological and postnatal environmental factors”. Indeed, they even went on to say, “[it] is not the case that sexual orientation is immutable or might not vary to some extent in a person’s life.”

And a lesbian academic has also come out recently saying some very non-PC things about all this. Sex researcher Dr. Lisa Diamond has looked carefully at some of the research on this, and takes a much more nuanced approach than many of the activists and most of the MSM. Her concluding words are these:

1. fluidity in identity, attraction and behavior is NOT specific to women but a general feature of human sexuality, one which is also confirmed by historical and cross-cultural literature;
2. the various sexual categories currently in use (LGBTQI, etc.) are useful heuristics (mental shortcuts, rules of thumb, educated guesses or stereotypes), but though “they have meaning in our culture, … we have to be careful in presuming that they represent natural phenomena” (38:55);
and 3. it is “tricky” to use these categories for advocating rights based on the concept of immutability “now that we know it is not true … As a community, the queers have to stop saying: ‘Please help us, we were born this way and we can’t change’ as an argument for legal standing.”

Finally, major study has found what many of have already known: relationship issues are among the main cause of homosexual suicide. As one story begins:

While many assume that family rejection is the leading cause of depression among LBGTI individuals, a new study has found that in fact the problem appears to stem predominantly from the higher incidence of relationship problems among homosexuals. Dr. Delaney Skerrett led a team of researchers from the Australian Institute for Suicide Research and Prevention (AISRAP) in studying suicides in Queensland. He found that a leading cause of suicide among “lesbian, gay, bisexual, transgender, and intersex” (LGBTI) people is stress from their romantic partners.
“We tend to assume that the psychological distress LGBTI people are often going through is due to family rejection. But it seems that’s not so much the case. The conflict seems to be largely related to relationship problems, with partners,” Dr. Skerrett said. In fact, he said, “The numbers are telling us there’s a general acceptance at the family level,” something he said is “great” and “really heartening!”
Instead, the study, which was published on April 2 in Asia Pacific Psychiatry, found that “LGBT individuals experienced relationship problems more often” than heterosexuals, “with relationship conflict also being more frequent than in non?LGBT cases.” That confirms previous studies finding that homosexuals also face higher rates of intimate partner violence than heterosexuals.

Dissent will be punished

So there we have four different voices taking a rather differing line to the orthodox homosexual mantra. But as I said, those who dare to speak out will often be harshly dealt with. Consider just one more recent example of this. One expert who dared to warn about the dangerous nature of homosexual activity has lost his job as a result:

He’s a pioneer in the realm of clinical infectious diseases in the Caribbean. And now he’s under fire for testifying that homosexual intercourse is dangerous to those who practice it—and to public health in general. Professor Brendan Bain, a practicing Christian who serves to treat AIDS patients, was the director of the regional coordinating unit of the Caribbean HIV/AIDS Regional Training Network (CHART) at the University of the West Indies in Jamaica, until his anti-gay sex comments caught up with him.
Bain was fired in the wake of fallout related to his testimony on behalf of a group of churches working to keep Belize’s sodomy law in place in 2012. It took two years, but now he’s paying the price for his beliefs. Bain’s testimony was based on his research, which shows the relative risk of contracting HIV is significantly higher among men who have sex with other men (MSM) in Belize than in the general population. His research concludes the same truth in several other countries for which data is available, including countries that have repealed the law that criminalizes anal sex and countries where the law still applies.

Yep, speaking the truth can be very costly today, especially when you dare to speak truth about the homosexual lifestyle and agenda. But it is good to see a few brave voices being raised. We need much more of this of course. But it is a good start, and I will continue to publicise it.

15 Replies to “Truth-Telling and Homosexuality”