So what do you do when the whole world goes mad? Or at least when so very much of the Western world goes over the edge? These are not just rhetorical questions either. Often after I give a talk on the collapse of Western culture, people come up and ask me with all seriousness, “Where can I go to escape this?”

The trouble is, there are very few places left in the West which are “safe” from all the moonbattery going on. The truth is, as the West continues to shake its fist at God and tell him he is no longer wanted, then every sort of madness, immorality, degeneracy, debauchery and ugliness rushes to the fore.

Political correctness comes in like a flood, and all sorts of ungodly agendas take charge. Thus the war on the sanctity of life, the war against marriage and family, the war against truth and absolutes, and the war against logic and common sense are all breaking forth after we have declared war on God.

So every day we see more examples of the secular left madness sweeping the globe. This website of course documents on a daily basis such developments. Sometimes the individual cases may not seem like so much, but of course it is the incremental effect that we must be concerned about here. 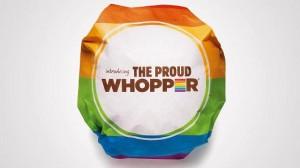 One act of PC foolishness will not bring down a civilisation, but many thousands of such cases may well. No society can for too long withstand the incessant war against its core values, beliefs and principles. As the moral foundations of a nation are eroded, eventually the whole culture must topple.

The trigger for writing this piece is another example of PC madness. Again, in and of itself it may not seem like such a big deal. But when seen as yet another of countless such assaults, then yes, it does become a real worry. I refer to the American hamburger chain, Burger King (known as Hungry Jacks in Australia).

In yet another example of corporate appeasement to the militant homosexual lobby, it seems we now have homosexual burgers. I kid you not. Another corporation bends over backwards (pun sort of intended) to placate the homosexual militants. Here is how one news item covers this story:

Burger King has concocted yet another way to have it your way: a gay pride burger. The Proud Whopper, as it’s called, comes wrapped in a rainbow colored wrapper with this inscription: “We are all the same inside.” It will be sold through Thursday at one Burger King restaurant on San Francisco’s Market Street, that was at the heart of the route for last weekend’s 44th annual San Francisco Pride Celebration & Parade. Burger King on Wednesday morning at 8 AM EST plans to post a two-minute video about the Proud Whopper on its YouTube channel.
“It showcases who we are as a brand,” says Fernando Machado, senior vice president of global brand management at Burger King. “It shows how we, as a brand, believe in self expression.” The inspiration behind the unusual burger wrap and video, he says, is Burger King’s localized efforts to put into motion actions that support its recently-tweaked slogan: “Be Your Way.”
The move also demonstrates BK’s desire to stay connected to its base of Millennial customers. Gay rights is an issue that reverberates strongly with many Millennials both inside and outside the U.S. Burger King also was a sponsor of San Francisco’s gay pride parade. Machado says that’s the first time Burger King has sponsored a gay pride parade in the U.S., though it may have sponsored some outside the country.
The downtown San Francisco Burger King sold “Proud Whoppers” last weekend, during the parade and also passed out some 50,000 rainbow Burger King crowns, that were worn by parade participants and spectators. The video, created by the Miami office of Burger King’s ad agency David, captures customers discussing whether or not the burger, itself, is different. At $4.29 it costs the same as a conventional Whopper. And, indeed, customers ultimately discover the only difference is the rainbow wrap. All Proud Whopper sandwich sales, Machado says, will be donated to the Burger King McLamore Foundation for scholarships benefiting LGBT high school seniors graduating in spring 2015.

This is so bizarre on so many levels. So will BK also have a Jesus Whopper to cater to the far greater number of Christians in the West, including so many who find the rampant promotion of the homosexual lifestyle to be morally repugnant?

Why do I suspect we will never see such things. Such corporations do not seem to give a rip about how much they offend, alienate and turn off ordinary Americans who have had a gutful of political correctness and the radical activist lobby groups.

Now, in the West a time-honoured means by which ordinary citizens can show their displeasure with a company or business is to boycott it. I suspect that plenty of Americans and others will now boycott a company which has devoted itself to promoting and parading sodomy. Indeed, many people have told me already this is exactly what they plan to do.

But what happens when the whole world goes mad? I tell these people I too fully support such boycotts, and/or taking your patronage elsewhere. But the trouble is, what do you do when one corporation or big business after another starts heading down this path?

Whether it is appeasing Islam and becoming duped dhimmis, or pushing abortion rights campaigns, or sponsoring homosexual activism, more and more groups are jumping into bed with these radical causes. If you say you will stop going there, and instead go to their competitor, more often than not the competitor is also flogging some ugly PC cause.

It is getting to the point that if we don’t want to subsidise with our custom and hard-earned money these lousy businesses, that we soon might all have to head for the hills. So many businesses and MNCs are pushing so many radical secular left causes lately, that it is hard to keep oneself morally uncontaminated.

And of course many people are doing just that – they are heading to the hills, seeking to be self-sufficient with their own gardens or farms, and remain aloof from an ever increasing diabolical culture. That is one way to proceed here.

Of course those like myself who believe in the importance of the biblical injunction to be salt and light feel the tension here. I too am getting so sick of our decadent godless culture. But I know we have a job to do here, and we must stay and fight. Sure, in the process I may have to forego having a Whopper, and so many other products which have now gone totally PC.

But we must take a stand, and we must let these groups know what we think. So please, don’t just stop having Whoppers. Actually contact BK and let them know why you are doing what you are doing. We must keep the pressure on the system, as the saying goes, and as the other side knows so well.

And if we do keep the pressure up, we might see some of these big companies relent and reverse course in some of these areas. It has happened before and it can happen again. So unless you feel a specific call of God to head for the hills, I urge you to stand, to fight, and to speak out.

It is only because we have been so silent and so inactive, while the other side has been working overtime, that so much of the PC madness is taking place. It is time to stand up and be counted.

22 Replies to “Homosexual Hamburgers: When the World Goes Mad”