Like so many institutions around the West, the Australian Army has become a hotbed of political correctness and anti-Christian bigotry. It will side with every idiotic cause around while actively siding against Christians. And tragically, Major Bernie Gaynor knows all about this. 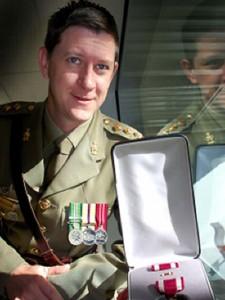 I have written about this brave man and dedicated Christian before. He has rightly made a stink about how the military is aggressively promoting decidedly unhelpful things for the national interest like Islam and homosexuality, while engaging in persecution of Christians: billmuehlenberg.com/2014/01/31/more-ugly-anti-christian-bigotry/

Well, for taking a courageous stance against some of this moonbattery in the military, the good Major has been given the flick. Yep, he is now seen as an enemy of the military, and he had to go. Gaynor has just written about his sacking, and I share parts of that with you now:

At this stage, the Australian Defence Force will be marching in Sydney with those who vilify Jesus Christ and Christianity next year and General Hurley will be Governor of New South Wales. While I am not surprised at this decision, I am surprised at how disappointed it made me feel. However, it is the military’s continued involvement in vitriolic anti-Christian activity that upsets me the most. The Australian Defence Force should be an honourable institution and, indeed, it has been. It has a proud place in Australian history defending our nation and its Christian values, culture and heritage.
But not anymore. Notwithstanding the many fine and honourable men and women who still serve this nation in uniform today, it is an organisation that has been corrupted at the top. Christians in the military have been sent a severe warning: do not defend your faith publicly if you want to keep your job. They must accept that their beliefs can be ridiculed by the Australian military.
The situation is so miserably bad that the same investigation that found Jesus Christ was vilified at the Mardi Gras also stated that Defence members would be severely dealt with if they attended an event that attacked Mohammad in the same way. In black and white writing, Defence has stated that Islam, the religion of our battlefield enemies, is to be protected while policy now allows attacks on the Christian faith.

Finally, I would like to thank you for your interest, support, donations and prayers over the last 18 months. I cannot properly emphasise how much encouragement I have taken from this and how it has made this journey easier for our family.
And please rest assured, I will continue to write and fight for family values and our Christian heritage. This is a personal defeat, but the war goes on. And when we are in God’s Army, victory is assured. We just need to accept that it will not always be at the time and place of our choosing.

In my books Gaynor is a hero and a champion. And the PC leaders in the military should be ashamed of not only how they have treated him, but how they are destroying our capability to properly defend this nation by following every leftist trend and activist agenda item.

At least one other person has rallied to his defence. Columnist Paul Sheehan has come out today with a great piece on Gaynor. He writes:

Gaynor served three tours of duty in Iraq while serving in Army intelligence. In a column published on March 17, I quoted a speech he had given to a conference in Melbourne: “It is my unpleasant duty to inform you that the Australian Defence Force has a fundamentally broken approach to religion, an approach shaped partly by the triumph of bureaucratic administration over battlefield considerations but mostly by political correctness …
“The ADF has a fundamentally flawed understanding of Islam. Just look at Iraq. I was one of the last Australians to serve there. All the politicians and military hierarchy were saying the withdrawal of Western military force was based on success. And yet al-Qaeda today controls more of Iraq than it ever did while Western forces were in the country …”
That was four months ago. It is much worse now. What Gaynor has predicted has spread, deepened and metastasised into Afghanistan.
“While everyone is watching the spread of the Islamic state in Iraq and Syria, we’re not noticing that areas where British and American troops fought and died in Afghanistan are being taken by the Taliban even before NATO forces have left the country … Helmand Province is being overrun by the Taliban. It is next to Oruzgan Province, where the Australian military was deployed and 40 Australians died.”

Gaynor sees this military failure as a symptom of a cultural issue over which he was willing to sacrifice his army career: his Christian faith. On this issue, by his own admission, he has been a provocateur and a serial litigator.
He formally protested the decision by the army to allow service personnel to march, in uniform, in the Gay and Lesbian Mardi Gras. He argued that army personnel are barred from participating in political activities while in uniform and that the Mardi Gras is a political event as defined by its own articles of association.
He also pointed out that Mardi Gras had a long history of openly vilifying the Catholic church, and Catholic clergy, over its opposition to same-sex marriage. Gaynor, who is Catholic, argued this was offensive to many Catholics, who make up about 40 per cent of military personnel.

15 Replies to “The Australian Army’s War Against Christianity”