That huge numbers of Christians today are selling out big time concerning their faith is not surprising. We were warned about this 2000 years ago. Jesus and the disciples made it perfectly clear that many would abandon the faith, succumb to carnality and sensuality, and end up siding with the world.

We see this being played out all around us these days. The massive capitulation to the homosexual agenda by so many churches and so many Christians is just one prime example of this. Instead of standing true to Jesus Christ and the Word of God, these compromising Christians simply follow the world wherever it goes.

Instead of defending biblical truth, and facing the music for doing so, they take the easy path of making friends with the world and going along with its ungodly agenda. And amazingly they still think they are actually Christians while doing all this.

Well, I have news for them: they are spineless wonders who will one day stand before the Judge of all things. There is nothing brave about slavishly pushing what the world is pushing. Real strength comes when we resist the siren song of a world at war against God.

Opposing the seductive agenda of trendy leftist secularism is what really takes courage and strength. Indeed, any dead fish can simply float downstream. It takes a strong living fish to move upstream, against the flow. Sadly the church today seems to be filled with dead fish, simply floating in the world’s wake.

And when we compromise in one key area of biblical truth, then we are almost certain to compromise in other areas. New research makes this altogether clear. Mark Regnerus analyses data from a study of 16,000 Americans, and the results are shocking, yet not really surprising.

The key finding is this: “Churchgoing Christians who support same-sex marriage are more likely to think pornography, cohabitation, hook-ups, adultery, polyamory, and abortion are acceptable. And it’s reasonable to expect continued change in more permissive directions.”

His recent article goes into detail on this, and it makes for very sobering reading. But as I say, it is not unexpected: when we tell God he is wrong about one thing, we will soon tell him he is wrong about many other matters. Regnerus explains the research:

I rely on the Relationships in America survey, a data collection project I oversaw that interviewed 15,738 Americans, ages 18-60, in early 2014. It’s a population-based sample, meaning that its results are nationally representative. The survey asked respondents to indicate their level of agreement or disagreement with these seven statements:
1. Viewing pornographic material is OK.
2. It is a good idea for couples considering marriage to live together in order to decide whether or not they get along well enough to be married to one another.
3. It is OK for two people to get together for sex and not necessarily expect anything further.
4. If a couple has children, they should stay married unless there is physical or emotional abuse.
5. It is sometimes permissible for a married person to have sex with someone other than his/her spouse.
6. It is OK for three or more consenting adults to live together in a sexual/romantic relationship.
7. I support abortion rights.
There is more to sexual and relationship morality than just these seven items, to be sure, but they do offer us a glimpse into how people perceive various practices and relationships. In order to ensure this is not just an exercise in documenting the attitudes of Christians “in name only,” I’ve restricted the analysis to churchgoing Christians—here defined as those who report they attend religious services at least three times a month and who self-identified with some sort of Christian affiliation. And I’ve restricted the analysis to those who report a position either for or against same-sex marriage. (I’ve excluded the one-in-four who reported they are undecided.)
For comparison purposes, however, I report the population average for each measure here, to use as a gauge of where the country is as a whole, as well as the attitudes professed by self-identified gays and lesbians who also report affiliation with a Christian tradition, and gays and lesbians that do not report a Christian affiliation. Because there is no attendance proviso attached to these two groups, the minority of gay and lesbian Christians that are regular churchgoers may also appear in one of the first two columns. 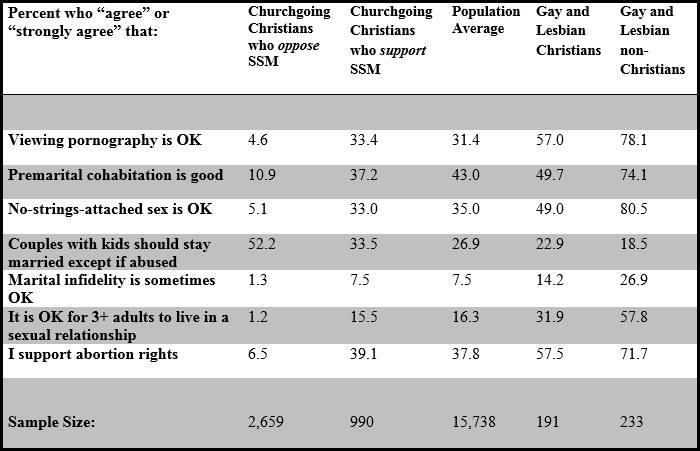 The accompanying graph says it all, so there is no need for me to repeat the findings. Read the figures and weep. Regnerus concludes with these words:

Again, if anyone is even remotely familiar with the warnings of Jesus and those of the other writers in the New Testament, this will not come as a surprise. Indeed, all of Scripture speaks to this. The many warnings – and examples – of Israel falling into compromise, carnality and capitulation in the Old Testament also demonstrate these sad truths.

So while these pro-homosexual “Christians” today will speak about how enlightened they are, how progressive they are, and how tolerant they are, they of course are no such thing. They are rebels and apostates who have called God a liar, and will one day give an account to the Holy and Righteous God about their disobedience, immorality and rebellion.

I would not want to be in their shoes on that day.

28 Replies to “Christians, Compromise and Carnality”