My title may seem oxymoronic, and perhaps it is. But here I am speaking about cooperation amongst Christian political parties. I realise putting the word “Christian” in front of this phrase does not mean everything becomes sweetness and light, but in theory it should be a bit easier for such parties to work together.

Specifically, I am referring to something I am often asked about: we now have four smaller basically Christian political parties in Australia. Without looking up the details, I list them here roughly in order of when they first came on the scene:
-the Democratic Labor Party
-Australian Christians (new name, but an offshoot of Fred Nile’s long-standing Christian Democratic Party)
-Family First
-Danny Nalliah’s Rise Up Australia Party

These four minor parties have stood candidates at various elections now, for the most part without much success. Of course in its heyday, as a breakaway from the Labor Party, the DLP did rather well. But now it often only has one Senator in Federal Politics.

Family First has also had just a handful of elected candidates at state or Federal level. While Fred Nile has long been successful in NSW, the new AC party so far has no one elected (but it is quite new). The same with RUAP. So here we have four small parties with many similar aims and platforms, struggling to enter and stay in the political arena.

As I say, people often ask me why they don’t all just merge into one bigger Christian party. It is a good idea in theory perhaps, but I usually reply that it may be unlikely for various reasons. So here I want to discuss those reasons, but then move on to a hopeful development.

As to why a major merger is unlikely, consider these issues:

It is often true that when any organisation – be it political or not – is started and lead by strong, charismatic figures, it may not always be easy for such leaders to relinquish power or agree to share power with other such leaders. This is of course true in the world, but sadly can be equally true in the Christian world.

While all four parties share many common visions, directions and policies, there are some differences. All can be called Christian parties, but differences still exist. The DLP always has been and likely always will be overwhelmingly Catholic in makeup.

The other three are primarily evangelical Protestant. So that can be a sticking point of any future unity tickets. And FF, although really mainly Christian in outlook and membership, is trying hard to bill itself as just another political party, without the Christian baggage.

AC and RUAP are then the closest in terms of being up front Christian parties – unashamedly so. They are quite happy to announce and proclaim their biblical Christian roots and orientation. So for the four to join when one or two are downplaying their Christian roots and identity can be a major stumbling block from the outset. 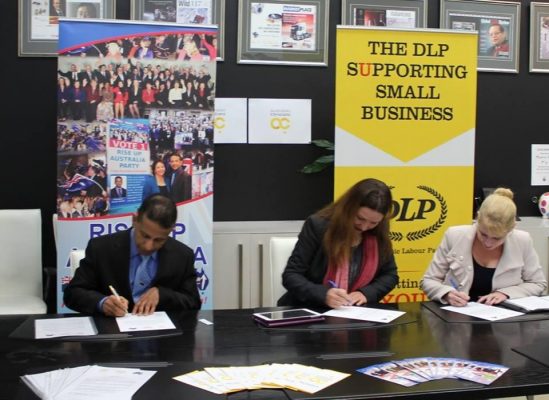 For these and other reasons a grand merger where all four lose their individual identities and they all become one big happy political party seems rather unlikely – at least at this stage. But things may change in the future. Indeed, one brand new development does give hope that some sort of unity and cooperation here may be possible.

Three of the four parties did in fact just come together, at least on a more limited, tactical front. They have agreed to cooperate in their preference deals, for the sake of standing up for life. This limited and presumably short-term trial arrangement is a promising one, and more such cooperative efforts may occur in the future. Here is how the press discusses this move:

Three socially conservative minor parties are seeking to make abortion an election-deciding issue by promising to help candidates who share similar views. The Democratic Labor Party, the Australian Christians, and Rise Up Australia Party, have signed an agreement to create a preference flow based on “shared values” such as being opposed to abortion.
And the group says it will direct supporters to preference either the Labor or Coalition candidate in key seats based on whether that candidate supports watering down abortion laws. Victorian state director of the Australian Christians, Vickie Janson, said protection of “the unborn” was one of the primary motivations of the group.
“Today, Australian Christians, the Democratic Labor Party and Rise Up Australia Party have agreed to preference candidates in this upcoming state election, who have the courage to be a voice that affirms the value of life itself,” she said.

The DLP Victorian president Rachel Carling-Jenkins said the historic agreement would allow people of similar views to ensure their vote counted. The parties are likely to only get a small fraction of the vote, but by combining forces they say they could do some damage in marginal seats.
Party strategists point to the marginal seat of Monbulk, held by Deputy Opposition Leader James Merlino, as an example of where the group’s actions could make a real difference. The group intends to preference Mr Merlino, because of his social views.

There was even a very short segment on this in one of the television news broadcasts. This move seems to be a helpful and sensible one, which may well pay off dividends in at least small ways. Putting political and other differences aside, if even for the short-term, for the sake of principle and the greater good is certainly commendable.

The cause of life is one of those crucial issues which all so-called Christian parties should be committed to, and should be willing to cooperate with other like-minded groups about. Why FF did not come on board here I am not privy to. But perhaps they may one day also make some such moves.

So there is hope yet. As separate parties, each running their own candidates, these parties will have little chance of much success. The truth is, the electorate pie that these groups can draw from is small to begin with, and by having four separate parties, each piece of the pie they get becomes even smaller.

So by banding together, if even on limited aims, is a sound and sensible way to proceed. Well done to these three parties for being willing to work together, to make perhaps a small bit of compromise in order to achieve a higher good and a better outcome for the unborn.

I hope the strategy works, and I salute these three parties and their leaders for making this happen. Well done one and all. And well done especially to the three who signed the “Public Assurance of Cooperation”: Vickie Janson (AC), Rachel Carling-Jenkins (DLP), and Daniel Nalliah (RUAP).

24 Replies to “On Political Cooperation”