So, when’s the last time you wrote four million words? If you were to ask me that, I would have to say, “Well, in the past decade or so”. For good or ill, that is exactly what I have done. My 3000th article has just appeared on CultureWatch, and that means a whole lotta writing has been going on.

OK, so let’s get the math out of the way first. I am guessing, but my average article length may be 1300 words. So that means we have here 3.9 million words. Alright, round it off to a tidy four mil. Not bad work I suppose for just an ordinary Joe. 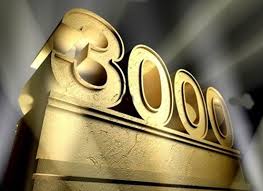 I posted my first article on my website April 5, 2006, and today I posted article number 3000. True, there were some older articles which I posted and backdated, so we are talking more than just eight years here. But the great bulk of these pieces would have been written during that period.

Some specific areas within those categories warrant special attention. New developments which are of concern thus get a fair look at. Pieces on the emerging church amount to 33, while articles assessing and critiquing the health and wealth gospel number 46.

Some issues are of course mega-topics given how seriously they impact on things like faith, freedom and family. Thus the homosexual issue is covered in over 500 articles. And I make no apologies for this whatsoever. The simple truth is, the homosexual juggernaut is one of the most serious ethical, social, cultural, political, legislative, and spiritual problems facing us in the West today.

It is of course not the only threat we face, but it is a major one. Islam is another such threat. I believe that Geert Wilders was quite right to state that Islam is the Communism of today. Just as godless Communism was hell bent on taking over the world, slaughtering millions along the way, so too is Islam.

That is why I have penned well over 300 articles on Islam, totalling some 400,000 words. This is a key area which we must be fully aware about, and since the lamestream media is hardly giving us any truth about Islam, then sites like this must fill in the gaps.

And there are well over 1000 articles on ethical issues of all sorts. Also, for book lovers, I have over 400 book reviews on all sorts of topics. It is clear that there is certainly no shortage of things to write about. As long as there are things happening in the world, I will continue to write about them.

This site does not just feature my writings however. It is an interactive blogsite, with plenty of people offering their comments. The 46,000th comment appeared on my site earlier this month. Those 46,000 comments did appear on my site in the past eight years, so it means at least that some folks are reading it and interacting with it.

While the majority of those comments would be supportive, there would be many thousands of comments from my many critics. Of course there may be another 10,000 comments which had to go into the bin, as they violated my commenting rules. Often they were just too foul, vile and hate-filled to appear in a public forum. One thing you discover very quickly with a public website is there are a lot of haters and fiendish trolls out there.

So it can be a major headache at times. There are always things happening in the world that deserve commenting on, and there are always people who want to send in their two cents’ worth. So it really is a 24/7 ministry, which keeps me going continuously.

But I am not just doing a lot of writing and interacting with the comments of others. My work also entails plenty of involvement with the media. Indeed, during the past two decades or so I have done over 3000 media engagements, including well over 700 radio interviews, and nearly 1000 articles printed in various magazines and journals.

Speaking engagements, teaching assignments, conference speaking and church preaching is also part of the work that I do. And when all that is not taking too much of my time, I continue to write books. I penned three books in the past four years, and have another three hopefully to appear within the next 12 months.

So, the question remains: why do all this? Why keep up with not only a frantic schedule, but daily loads of abuse, hatred, opposition, and ridicule? The answer is simple really: this is the work I have been called to do, and I will perform this task to the best of my ability, and by the grace of God.

In a world starved of truth and the Christian message, I will work at this until I am no longer able to. Sometimes people ask me if I will retire. But how can you retire from doing God’s work? How can we stop being salt and light? How can we just stop being a Christian witness to a needy world?

As long as I have strength and the ability to keep going, I will. And of course most important of all, as long as I know that I have prayer warriors who are praying for me, interceding for me, and standing with me in the heavenlies, I will keep plugging away.

This ministry is of course not perfect, and I have done many things wrong, made many errors, have not always represented Christ as well as I might, and have not always been the best example of an ambassador for Christ. So where I have gotten it wrong or overstepped the mark, I ask for your forgiveness.

I have not always gotten it right, and will likely continue to be off the mark. All the more reason why I covet you prayers and your regular intercession for me and this ministry. I am quite aware of how important it is to accurately represent the Lord, and it is my desire to do so more faithfully and more truly each passing day.

All glory to God.