This is an absolute classic! I love it! It just makes my day. I could not have made any of this stuff up. Sweeeeet. So what’s it all about? Well, let me tell you: homosexual activists are fuming in New Zealand, because two males are about to get married.

So?? Well, the happy couple happen to be heterosexual. And for that, the homosexual brigade is spitting chips and going absolutely nutzo. Yes you heard me right. Just when you thought all this madness could not get any worse, now we have homosexualists upset about, and discriminating against, those with other lifestyle choices.

Bizarre as. My mind is still reeling! But hey, I am not making this up. Here is how the story goes: 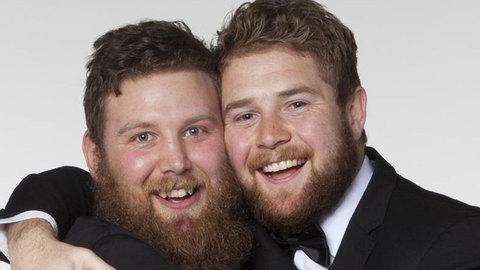 Travis McIntosh and Matt McCormick wrote their wedding vows yesterday, brimming with”nervous excitement” about their big day. The Dunedin men will marry tomorrow, but their move has horrified gay groups. The pair are heterosexual best mates. Engineering student Mr McIntosh, 23, and teacher Mr McCormick, 24, will tie the knot to win a The Edge radio station competition and a trip to the 2015 Rugby World Cup in England.
Mr McCormick said from Auckland yesterday opposition to the wedding was understandable but the pair never intended to offend anyone. “We are not here to insult anyone. We are here to do our own thing and travel our own path.” Mr McIntosh said the wedding was not mocking the institution of marriage. It’s just seeing how far two good mates would go to win a trip to the Rugby World Cup. We picked up our wedding certificate and the nerves are starting to really hit home.”
They will marry in front of 60 family and friends at Eden Park, Auckland. Mr McIntosh said most guests would travel from Dunedin and Central Otago, paying their own way. A celebrant would make the union legally binding and Crowd Goes Wild television presenter James McOnie would be MC. The pair said their wedding vows would touch on their friendship and recall their time playing rugby together at King’s High School in Dunedin.
They were undecided if they would take hyphenated surnames and who would walk down the aisle. The couple’s wedding song is Cruisin’, by Huey Lewis and Gwyneth Paltrow. Mr McIntosh said he thought the marriage would last at least two years. Mr McCormick, a teacher at Musselburgh School, said the friendship began after the two met at Pirates Rugby Club in Dunedin when he was aged 6. His family, like Mr McIntosh’s, was excited about the wedding. “They’re backing us 100 per cent,” Mr McCormick said.

So are the homosexual activists celebrating in yet more cases of diversity and equal love? Are they over the moon with more marriage equality? Are they going to be there, joining in on the festivities? Um, no. They are completely ticked off to be honest, and think it is just terrible:

However, gay rights groups have condemned the union. Otago University Students’ Association Queer Support co-ordinator Neill Ballantyne, of Dunedin, said the wedding was an “insult” because marriage equality was a “hard fought” battle for gay people. “Something like this trivialises what we fought for.” The competition promoted the marriage of two men as something negative,” as something outrageous that you’d never consider”, Mr Ballantyne said. LegaliseLove Aotearoa Wellington co-chairman Joseph Habgood said the competition attacked the legitimacy of same-sex marriages.

I am still laughing at all this. The assault on marriage and family is now coming back to bite them – and they don’t, like it! Well toughen up fellas. You started all this, and now you are whinging about how it is now simply going to its logical conclusion.

So now people actually follow your advice, and you throw a major hissy fit. Hey, grow up already. If two male sodomites can marry, then why in the world can’t two male heterosexuals marry?! Why are you so opposed to what these guys are up to?

Hey, they are in love – isn’t that all that matters? How can you be so discriminatory and so bigoted just because of someone’s sexual orientation? Why are you trying to drag us back to the stone age? Why are you so judgmental and narrow-minded?

Get with the times, cry babies. This is the 21st century you know. Stop your bigotry, hatred and discrimination – now. Love should always be affirmed, celebrated and promoted, no matter what form it takes.

16 Replies to “Heteros Biting Back”