Imagine this scenario if you will. A Christian bookshop in the leafy suburbs of an Australian city is actually much more than it appears to be. Inside it has all sorts of literature calling for the killing of non-Christians, and attacks on Jews.

It features books arguing for the second class citizenship of women, and urges Australian Christians to rise up against the nation and overthrow democracy, rule of law, and religious freedom. Not only is it selling such literature, but it actively recruits Christians to go and fight overseas, killing in the cause of Christ.

And it is involved in raising funds for such overseas terror activities. But hey, it is a good Christian bookshop, so we really should not get too excited about some of these extra-curricular activities. Plus we don’t want to be seen as racist, bigoted or intolerant, now do we?

Now let me assure you that if a Christian bookstore were involved in such things, every news outlet in the country would feature it as their lead story, would demand that it be shut down at once, and urge that we look closely into whether we allow Christianity to continue in this country.

Well, I have a bit of good news here for those who might be getting worried: there is no such Christian bookshop in Australia, or in any other country that I am aware of. This is not at all what biblical Christianity is about, and if it were found to exist, every true Christian in the nation would denounce it in the strongest of terms.

But there is also some bad news here. You see, this scenario happens to be perfectly true. It is just that it is not a Christian bookshop, but – wait for it – an Islamic bookshop. Yep, this is an actual Muslim shop up in Brisbane, Queensland. 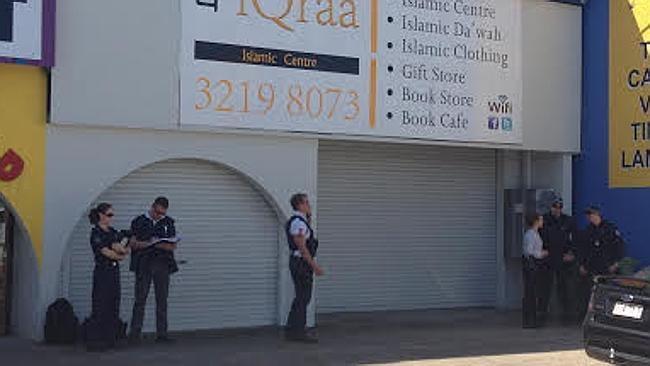 The story first broke 4 days ago. Here is part of that initial report:

A Logan man believed to be the brother of Australia’s first suicide bomber in Syria is running a bookshop south of Brisbane which is accused of promoting extremist views. The Courier-Mail has been told that the iQraa Islamic Centre at Underwood had developed ties to firebrand Perth preacher Mohammed Junaid Thorne.
The centre this year “promoted’’ and helped raise funds for two “sermons’’ by the self-styled preacher, who is a vocal supporter of jihad and has had ties to the Australian branch of the Millatu Ibrahim group, which is banned in Germany. It can also be revealed the centre hosted a lecture this year on what followers should do if they were contacted by national security organisation ASIO.
The lecture included being aware of the “tell-tale’’ signs of spies and examples of when a group had been infiltrated.
But a spokesman for the Logan centre said it merely engaged people to speak on a range of opinions. A key figure in the bookshop is Omar Succarieh, who in an online promotional video is described as “one of the main brothers’’ at the centre. Succarieh’s brother Ahmed has been investigated by Australian agencies in relation to a suicide bombing in Syria, where a truck laden with 12 tonnes of explosives was driven into an army checkpoint last September, killing 35.

And then there are the very interesting books on offer there:

While the iQraa Islamic Centre does offer books promoting peaceful coexistence and respect for women, it also carries on its shelves books that call for men to restrict the movements and employment opportunities of their wives and some that even assert that “beating” can be used “as a last resort”. One such book, Forty Solutions to your Marriage Problems, describes the “Jewish plan to emancipate women and thus corrupt them and society” and says women “should remain in (their) homes, but go out only if it is necessary”.
It discourages women working, unless “necessary”, because it may lead to mixing with the opposite sex and possibly “illegal sexual intercourse”. Author Muhammad Salih Al-Munajjid also lists as recommendation 25 “hanging a whip in a visible place”. “Hinting at punishment in different ways is one of the elegant methods of punishment,” he writes. He does note that it has been previously said that the whip is not explicitly “meant for beating”.

If all that was not bad enough, today new revelations are appearing, with a police raid actually resulting in the arrest of two men:

Two Brisbane men face terrorism charges after Australian Federal Police raided an Islamic bookstore and seven homes on Brisbane’s southside. It will be alleged the men were involved in recruiting, facilitating and funding people to travel to Syria to engage in hostile activities, the AFP says.
The charges come after an Islamic book store and drop-in centre south of Brisbane was raided by the Australian Federal Police this morning. Officers are still on scene at the iQraa Islamic Centre on Logan Rd, Underwood several hours after the raid. Two men were taken into custody. At the same time, there were seven raids on homes across the Logan area. Bullet holes were also found in a window at the centre.

Now that is serious stuff. But as I have documented plenty of times, this is simply Islam 101. It is not an aberration or perversion of Islam. It is not extreme Islam. It is not Islam gone bad. It is Islam, pure and simple. It is the house that Muhammad built.

But so far I have not seen mass rallies in the streets by “moderate” Muslims condemning both the extremist literature in such bookshops, nor the recruiting and funding of jihad which happens also in mosques and elsewhere. I am often hearing Muslims defend these sorts of things, but those criticising it seem to be on holiday or something.

As I have said before, when it comes to all the so-called moderates in the Islamic community, the crickets keep chirping. No mass protests, no taking to the streets, no angry letters to the editor condemning all the terror, bloodshed, beheadings and jihad. Just business as usual.

8 Replies to “The House that Muhammad Built”