I just came back from a speaking engagement. I, as a Christian, gave a Christian message to a group of Christians at a Christian men’s breakfast at a Christian church. But I assured them in the strongest possible terms that all this had absolutely nothing to do with Christianity. Really.

I mean, if we can be assured by all our leaders that when Muslims committing Islamic acts in the name of Islam have absolutely nothing to do with Islam, then I guess I can do the same. Why not? Whether it is Obama or Cameron or Abbott or the police or whoever, everyone is bending over backwards to tell us that Islam has nothing to do with Islam.

Whether it is planned Islamic beheadings in downtown Sydney, or the Islamic State doing its Islamic thing in the Middle East, none of this has anything to do with Islam! And you can count on that. After all, Barack Hussein Obama told us so.

As have so many other Western leaders. You know, there is actually a term for all this. It is called dhimmitude. A dhimmi is a non-Muslim who is treated as a second-class citizen by his Islamic overlords, and who submits willingly to the humiliation, degradation and insult that the Islamic captors pour upon him. 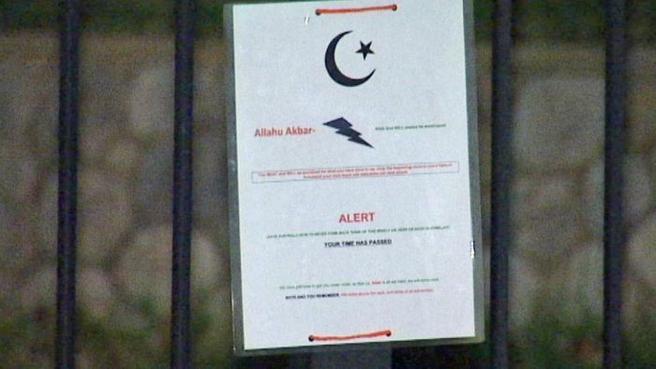 I document this almost on a daily basis now. And here is another prime example of all this. It seems there was an arson attack on a home in Melbourne’s east overnight. But along with it was a threatening note, complete with Islamic symbols and the words Allahu Akbar.

But the absolutely amazing thing is, most of the lamestream media is playing down the Islamic note threat, as are the police! What? Say that again! OK, the MSM and police are doing all they can to say this has nothing to do with Islam or terrorism. I kid you not.

Most of the media outlets I have looked up online do not even mention the threatening message, and if they do, they omit any reference to Islam. One online newspaper even showed the note, but not the top of it with the Islamic symbols and Islamic sayings!

One site at least did post a pic of the whole sheet penned to a fence. Here is how this site runs with the story:

A threatening note has been attached to the front fence of a house that was engulfed by flames in Melbourne’s east overnight. A vacant house in George Street, Doncaster, that was due to be auctioned on Saturday was fully alight when fire crews arrived about 10:00pm on Friday. Crews found a note with a symbol associated with Islam at the top and a message that, in part, said “ALERT … your time has passed”.
It also said: “Only the beginning more to come here or homeland, your next move will determine our next attack. “We strike above the neck.” Detective Senior Sergeant Ian Shepherd said police were investigating if the note and the fire were linked. “The investigation will look into whether or not that’s connected to the fire or not. It’s possible that it’s not,” he said. “But it’s certainly of interest to the investigation and the subject on that note is of interest as well.”

The head in the sand approach is even more pronounced and appalling in another newspaper account:

A laminated note on the fire-ravaged house in George Street, Doncaster, contained a symbol associated with Islam and made a number of threats. “ALERT … your time has passed,” it said. “Only the beginning more to come here or homeland, your next move will determine our next attack. We strike above the neck.” But police are not treating the arson as a terror attack or hate crime.
Senior Sgt Tim Hardiman said police would forensically examine the note and its contents. “There were some comments in the note which we do have some concerns about but at this stage we are not treating it as anything other than a house fire and an arson. The note is something we are investigating but we are not jumping to any conclusions. I understand it can be alarming for people in the vicinity but what I can say is Victoria Police is here to protect everyone in the community regardless of race or religion.”

What!? Not a terror attack or a hate crime!? Nothing to do with race or religion!? Not jumping to any conclusions!? Um, duh. Let’s just turn this around for a moment. Imagine if a similar note were left at an arson attack, but instead it featured a cross on top, and words about this being a Christian strike force or some such thing.

Would we really have police saying we can’t jump to conclusions, it is not hate based, and it is not religiously motivated? And imagine if this were done to a Muslim’s home. We know for a fact that every media outlet in the country would make this front page news, and every single television news report in the evening would have this as their lead story.

‘Yep, those nasty ugly Christians are at it again! We all knew Christians were hate-filled bigots.’ They would be guilty until proven innocent. Yet here, when we have a 1400-year track record of religious violence done proudly in the name of Islam, we have everyone in the media and in authority running for cover, spending their whole time as Muslim apologists.

How in the world have we arrived at that place? How have we come to such a bizarre and dangerous situation? How is it that every Islamic thing done by Muslims in the name of Islam we are insisting has nothing to do with Islam? What sort of utter fools have we become in the West?

It is one thing to cower in fear at a political ideology and death cult like Islam, but to actually do their work for them? To actually be their PR agents? To actually spruik for everything Islamic? What in the world is happening in the West? We are not only allowing Islam to destroy the West, but we are actively helping them out in the process.

Lenin called Westerners who did the same thing in terms of communism “useful idiots”. It is clear that the West is now overrun with useful dhimmi idiots.