The news of the major foiled Islamic terrorist raid in cities around Australia is still developing, and we keep learning more about what was being planned. For example we now know that attacks on Parliament House in Canberra were also being considered.

As one report states: “Mr Abbott said Parliament House was ‘certainly a potential target’ for terrorists. ‘There has been chatter amongst these terrorist support networks for some time about possible attacks on government here in Australia,’ he told Channel Seven.”

Also, more raids and more arrests are expected shortly. Other cities may well be targeted, and this is in fact an ongoing investigation and security concern:

The Australian Federal Police has not ruled out further arrests following yesterday’s raids. Police are expected to continue searching some properties today as part of the major operation into alleged terror plots. AFP acting commissioner Andrew Colvin said police would take their time digging up backyards and combing homes for “hides” — stashes of cash or firearms that could have been hidden. He declared the massive counter-terror operation was only just beginning. “In many ways it’s just a new phase,” he told ABC TV.

Of interest has been the initial reaction from Australian Muslims. As usual, our radical left media outlets such as the ABC and SBS have been running hot, telling the story of ‘Muslims as victims’ once again. Instead of focusing on the horrible acts of terror that were being planned, these dhimmi media groups were telling us about all the poor Muslim victims. 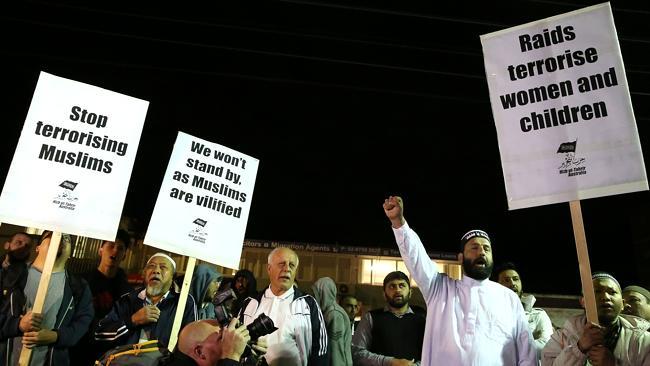 Thus we heard about how family members of arrested suspects described the raids. Here is one such description:

When asked why police had targeted his brother, he said he had no idea. “I dunno, I got a lot of anger. It’s a war on Islam just because we grow our beards. They want to label us as a terrorist, or supporters of IS, whatever, that’s up to you.” he said. He later said he believed Kawa may have been targeted because he hung around with “hot heads”. “He’s just trying to live his life, do his own thing. I know ASIO is on to them [other friends targeted during the raids].”

And then we had public protests last night. To condemn the terrorism and jihad? Nope, to condemn the police and the raids! Thus we had banners with the words, “Stop terrorising Muslims” and “We won’t stand by as Muslims are vilified”. Really!

At rallies in Lakemba in Sydney’s west, speakers referred to the police as “pigs” and “dogs”. A Facebook site devoted to this said, “The Muslim community is squarely the target of these raids and laws, the climate of hysteria only increases as the government fabricates reasons for these draconian laws.”

Not to be outdone, Hizt ut-Tahrir spokesman Uthman Badar said the Islamic community was getting angry and that Muslims must stop being victimised: “We are tired of being made scapegoats. The government is the terrorist”. Wow. Governments seeking to protect their own innocent citizens from Islamic beheadings and jihad are the real terrorists.

It is clearly time to act on this hothead and his group. It is now being discussed:

The federal government will consider expanding the criteria for proscribing terrorist groups following fresh advice it could not act to curb the activities of the radical group Hizb ut-Tahrir under existing laws. The Daily Telegraph has learned the government recently sought fresh advice on whether it could proscribe the global organisation, which has accused Prime Minister Tony Abbott of demonising jihadist fighters in Iraq and Syria, as a terrorist group.

And how have Australia’s so-called moderate Islamic leaders responded? So far very few have spoken out, and those who have done so have not been all that reassuring. For example, Dr Jamal Rifi, a leading figure in Sydney’s Muslim community, simply offered us more moral equivalence:

“We are calling on all our community to take care because, just as we have extremist people in our community with intention to hurt Australians, we also know there are some racist elements who may react to innocent members of our community. If something like this happens, then we haven’t learnt the lesson from the Cronulla riots.”

And the usual red herring of “racism” is of course brought up. Anyone concerned about Islam and all the violence we find associated with it are simply racists. Never mind that Islam is not a race, but a religion, or more accurately, a political ideology bent on global conquest.

But hey, at least we had some major mass marches of angry moderate Muslims denouncing the violence and terror and jihad – or, maybe not. Indeed, I have been waiting for years now to see just one mass march of these “moderate” Muslims on our streets denouncing all forms of Islamic terror and jihad. Why do I keep thinking I will be waiting for a long time to see all this?

And this thwarted terror plot was certainly not the first such affair. Australia has had others unfortunately. One writer lists four major failed terror plots in recent Australian history:

So this was not the first such attempt at mass Islamic terror in Australia, and we can be guaranteed it won’t be the last. There are at least two ways to prevent such terrorism. One is for the very active and vigilant policing work of our counter-terrorism, security and police forces. They did an excellent job with this latest threat, and deserve our praise.

The other is for the mainstream Muslim community to come out en masse to protest what is being done in the name of their religion. But I won’t be holding my breath on that one.

13 Replies to “Australian Jihad: The Aftermath”