And I am proud as punch to be listed there! I only discovered yesterday that I am featured on this site, but it seems I have been there for a while. The only question I have is this: What took them so long? This site deals overwhelmingly with folks in America of course, but evidently I am such a notorious enemy of theirs that they had to include me as well, even though I live on the other side of the globe. 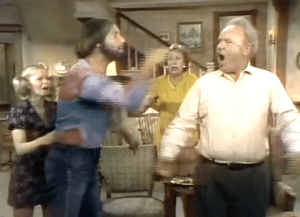 So what in the world is this listing all about? It is part of what is called Right Wing Watch, and it is put out by the fabulously misnamed People For the American Way. But let me provide some background here. Some of you may remember the hit 70s TV comedy show, All in the Family, which pitted a conservative redneck bigot, Archie Bunker, against his lefty trendy son-in-law.

The show was quite famous in breaking new ground as it dealt with controversial issues at the time, such as the Vietnam War, homosexuality, abortion, feminism and so on. So what does all this have to do with this honour roll and my listing on it?

Well, the guy who produced that TV show was Norman Lear, an arch secular lefty. And he was the one who founded People For the American Way (PFAW). Ahh, so the pieces of the puzzle begin to fall into place here. Here is how one description of this lefty outfit goes:

The PFAW, a leftist activist group and “watchdog” of what it deems to be the fearsome and shadowy Religious Right in America, was created in 1981 by former TV producer Norman Lear to combat Christian conservatives, promote progressive policies, and elect progressive candidates. It features such fair-minded intellectual powerhouses on its board of directors as actor-and-politician-wannabe Alec Baldwin and Seth MacFarlane, whose animated TV series Family Guy routinely and viciously ridicules Christians and conservatives. Currently in the crosshairs are those who speak out about the dangers of Islamic radicalization and the stealth jihad in this country.

About Right Wing Watch
People For the American Way’s Right Wing Watch is dedicated to monitoring and reporting on the activities of right-wing political organizations, in order to expose the agenda of the extreme Right. Our researchers monitor dozens of broadcasts, emails and websites, and use their expertise on right-wing movements to analyze and distill that information for the general public.
We hope that by shedding light on the activities of right-wing organizations, we can expose the risks that their extreme and intolerant agendas present to our country. We do not endorse the views of groups that we report on.

So Norm and his team now consider me to be the new Archie Bunker! I am now public enemy number one, or at least in their top 500 or so! Wow, I must be doing something awful to earn the wrath of these guys. OK, just include me with Attila the Hun and Jack the Ripper!

Yes, it seems that because I speak truth, adhere to biblical Christianity, think marriage and family are important, and value the sanctity of human life, that makes me a really evil dude. These are all “extreme and intolerant agendas” after all!

So now they do regular pieces on me, as they do on those other great champions I listed above. Well, as I say, it is an honour to be included with such wonderful company. If they want to blast me in this way, that is fine by me. I will wear all their indignation, scorn and hatred as a badge of honour.

Admittedly it is early days yet. There seem to be only seven hit pieces on me so far. But hey, give them time. I have so much material out there that soon enough they will do hundreds of hatchet jobs on me no doubt. And I will be proud of every single one of them. www.rightwingwatch.org/search/node/muehlenberg%20type:blog

Of course as can readily be seen, these pieces are primarily made up of lies and name-calling. Truth-telling and actually dealing with argument and evidence has never been a strongpoint of the secular left. They much prefer to sling mud, tell falsehoods, and simply abuse anyone they disagree with.

But the good thing is (although it is really stupid on their part), they end up featuring large slabs of my writing, and that of other conservatives. Sure, they rip things out of context and put their own jaundiced spin on everything, but still, at least some words of truth get to be heard.

Consider this piece for example: www.rightwingwatch.org/content/barbwire-warns-subway-has-joined-stealth-jihad-against-freedom

Hey, I get three or four paragraphs of my stuff printed there, so that is good news. That means truth is reaching even further – in this case, into the very citadel of radical leftism. They certainly need to hear the truth, so it is very kind of them to do me such a favour by running with my stuff.

I have long said that it is vital that we get truth into the public arena. The mainstream media refuses to do so for the most part, which is why the alternative media came into existence. And that is why I have over 3000 articles on my CultureWatch website.

So if leftist hate groups think I am important enough to regularly monitor and report on, that is fine by me. (I already have entire websites devoted to attacking me here in Australia.) That just means that my reach has gotten even wider, and more people will be exposed to truth, including those who need it so very much on the secular left.

So pray that my words continue to have an impact, along with the words of the many others I now share with as part of this honour roll. Pray that the truth will break through, and we may win some for Christ and his Kingdom.

I just read yesterday the words of Jesus as found in Luke 7:23: “And blessed is the one who is not offended by me.” Many of course were greatly offended by who Jesus was and what he said. Well, the servant is not above his master, so we can expect that people will also be offended by us and what we say as we seek to follow our Lord and represent him to a broken and needy world.

17 Replies to “On the Haters’ Honour Roll”