As many of you know, the Rolling Stones are now in Australia. While they may not quite be octogenarians, they certainly are in their 70s, amazingly. Soon their appearances will have to be undertaken with the aid of wheelchairs, one suspects. But they still keep on rocking.

But I here wish to talk about earlier times with the Stones. 45 years ago they were at a rock concert in San Francisco, and what happened there forever destroyed my optimism as a stoned-out hippy. But let me offer some background here.

I happened to live during that really remarkable but tragic period known as the hippy culture. It was a brief but amazing period, running roughly from the mid to late 60s to the early 70s. I was into it as much as a teenager from a small conservative Wisconsin town could be.

I often wonder how I would have turned out if I were a bit older and living in, say, California. But as a quite young person, living in a quite isolated town, I fully turned to the hippy scene and the counterculture. But I tell this story in more detail elsewhere: billmuehlenberg.com/2012/06/27/coming-home-my-testimony-part-1/

On August 15-18, 1969 the now forever famous Woodstock festival was held. In the minds of many of us hippies, it was the realisation of a dream: heaven had indeed come to earth. No police, no armies, no violence, yet 600,000 people lived together peacefully and harmoniously with free music, drugs and sex. The hippy dream had become reality.

So many of the heavyweights were there: Jimi Hendrix, Janis Joplin, Santana, Ten Years After, The Who, Crosby Stills and Nash, etc. It was the high point of the hippy generation. It was billed as “Three days of peace and music”, and was meant to be the dawning of a new age. 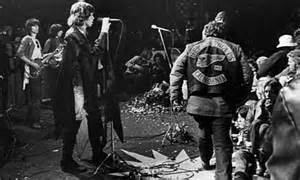 But at Altamont the bubble burst. The Jefferson Airplane, the Grateful Dead, the Rolling Stones were among the hardcore highlights. Unfortunately however, some of the groups seem to have decided that the Hells Angels would make for handy bodyguards and security.

They had served in this capacity at other rock events, after all. Unfortunately, they gave the bikers free beer as a payment – supposed around $500 worth – which was a pretty good amount back then. But Hells Angels and plenty of free beer is a bad combination.

I remember often as a young teenager back in Wisconsin being high on drugs, and meeting up with hardcore bikers. On the one hand we were on the same page, because we were both into dope, and lots of it. But it was always such a heavy trip when they were around, and I at least really got bad vibes.

It was just scary to be around them, even though we shared a common drug culture. And that was certainly the case at Altamont. As was to be expected, the crowd was always getting out of hand and trying to rush the stage. Before the eyes of thousands of young counterculture idealists, the Angels stabbed to death an over-zealous fan, and the demise of the counterculture began.

The really interesting thing is – looking back now as a Christian – that this happened while the Stones were singing their song, “Sympathy for the Devil”! Wow. “We always have something very funny happen when we start that number” Jagger said as he restarted the song.

There are various accounts of how and why 18-year-old Meredith Hunter was killed. Some say he pulled a gun as he again charged the stage. Whatever the case, it was a seismic shift in the entire hippy culture. When the Hells Angels stabbed to death a young concert goer that night, we all knew the Age of Aquarius was over.

It was the most devastating moment in our lives. It just left so many of us cold, and dead inside. Everything that Woodstock was and achieved, was lost at Altamont. This was the end. There could be no coming back. For those interested, there is a powerful 9-minute clip on this:

Obviously those who were not part of this culture and this period in recent American history may not get the same impact as those of us who were. But even if you were not even born back then, this really is a moving and heavy-duty video clip.

The Stones tried to keep going, and Jagger tried to calm things down. So many young concert goers looked up to the stage hoping to get some reassurance, direction and help from the Stones. But what could these British rockers do? It was already too late: young Meredith was already dead.

One of the most heart-jerking moments of this clip is at the end where we see a girl at the front of the stage with tears in her eyes (see from 8:10). She was all of us. We knew we had just witnessed the death of a dream. This was the death of a utopian quest. We all came crashing back to earth.

I remember it well. I was in fact back in Wisconsin, but one of my hippy friends, Cheryl, was in California during that period. One night around then I had a dream that she had returned. The next day we got a call that she was back home in rural Wisconsin. We went out to see her. She had been at Altamont.

By then we all knew about what had happened there. It was all such a big bummer. All over America we freaks were devastated about this. It was the defining moment of the hippy culture. It was the end of it. But it took a while before some of us turned to the true dream, the true hope.

It was not until two years later that I became a disciple of Jesus Christ. In fact, the gal who led me to Christ was the same gal who was at the concert – Cheryl. She, I, and so many other seeking hippies were utterly devastated at what happened on December 6, 1969.

We were left in a daze. Many of us were just lost and without hope. Too many of my friends died of drug overdoses or committed suicide. I should have died from both causes. But God was gracious. Many of us were on a journey, a quest. We were seriously seeking.

We really did think that the counterculture was the answer. We really did believe it would pan out. But it was a false dream. As Jesus said, when we try to build a house on sinking sand instead of the rock, the foundation will not hold. But God allowed it to happen, to bring many souls to Jesus Christ. At the same time the counterculture took place, God did his own work: the Jesus Revolution.

Hundreds of thousands of stoned-out lost hippies were swept into the Kingdom of God. I was one of them, and this is my story. Forgive me for my tear-soaked remembrances here. I am not even sure why I am writing this. I guess having the Stones in town jogged my memory.

But it is all about God and his amazing grace. While so many searching hippies never found what they were really looking for, many did. And God could even use events at a major California rock concert to work out his purposes. Soli Deo Gloria.

10 Replies to “The Rolling Stones, the End of the Hippy Dream, and My Story”