As I write, the Islamic hostage situation in Sydney is still underway, now for over seven hours. One or more militants with their Islamic flag are holding at least 13 hostages, and the entire scene is developing right now before the eye of the world. So this is a very preliminary piece of course and not a final word on the situation by any means. 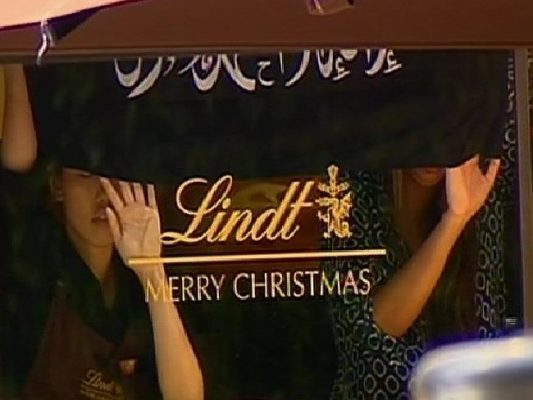 The Lindt Chocolat Cafe in Martin Place is the place of this ongoing drama. Lindt chocolates are of course non-halal, so this may be a partial factor in all this. But this is a strategic location. Parliament, government offices, the financial district, and Channel 7 are all in the immediate area.

Reports of bombs found at the Sydney Opera House, and so on, are also being aired. Evidently five hostages have now made it out safely. So this is a developing story which could go on for quite some time now. However, some preliminary things can be mentioned here.

As I was being driven to where I will be speaking all week in Perth, I heard various radio reports on this case. And incredibly I heard plenty of the usual nonsense already: this may have been triggered by Australian actions; it is not real Islam; we have to be careful not to alienate Muslims, etc, etc.

Indeed, the mainstream media is still terribly hesitant to use the M word or the I word. Never mind that rather Muslim-looking men with at least one IS flag are seemingly behind all this. Never mind that this all fits perfectly with the avowed goals of the militant jihadists.

I just finished telling a group of students this morning that we really should take seriously any group which openly tells us they plan to kill us. For 1400 years the political ideology of Islam has made it crystal clear that it seeks a universal caliphate where everyone bows the knee to Allah and sharia law – or else.

And with at least 240 million deaths at the hand of Islam, we really should start taking them seriously. And all the more so with radical groups like IS who have much more recently said time and time again that their members will be specifically targeting the West.

Since 9/11 alone, there have been 24,621 Islamic terror attacks around the globe. This is not, and has never been, the religion of peace. We must be absolutely clear about who our enemy is. A political ideology which hates the West and wants it destroyed must never be underestimated or ignored.

As G. Murphy Donovan has recently written, we must understand “Islamism, Islamofascism, and Islam”. He explains:

If only ten percent of Muslims (150 million) are militant, then the threat is substantial by any measure.
Neologisms are born when ordinary language fails to capture a phenomenon or an idea. Terms like Islamism and “Islamofascism” fill a void of meaning. Yes, the majority are not terrorists. They are worse! Passive aggressors might be a better description for most of the silent Muslim majority.
Germans were Nazis in the beginning? The numbers never have to be large. Militancy and terror are usually a minority and minorities still prevail. A kinetic vanguard can always depend on the silence and apathy of majorities. The Islamist menace is no different today.
Indeed, the propagandists and the swords are the lesser of two evils. We know what they believe, what they fight for, and we see what they do on a daily basis. Militants make no secret of their Islamic motivation. Whatever the number of radicals, they will never be as numerous, or as guilty, as the larger Ummah which is routinely disingenuous, routinely apathetic, routinely absolved, routinely hypocritical, and routinely given a pass on accountability.
Most Americans and Europeans believe that most Muslims are innocents. How is this different than what most Muslims believe? Sadly, the great crimes of any century are more a function of apathy and appeasement, and less a product of militancy. Apathy and denial about the Islamism problem is as much a problem in the West as it is in the East.
A malignant force, once set in motion, tends to stay in motion unless confronted by an equal or superior force (hat tip to Isaac). The real strength of Islamists is the apathy of 57 Muslim nations worldwide, a sixth of the world’s population. Islamofascism is an Ummah community problem. The progressive West cannot save the Islamic East from itself.
Calling Islamists criminals, militants, radicals, fundamentalists, or even terrorists might be necessary but not sufficient. These are half-truths, euphemisms at best. Proselytizers, apologists, and jihadists must also be linked precisely, directly, and routinely to the ideology that motivates them. Without motive, crime or any barbarity would not be a problem. That culture is Islam!

This is the Communism of our day which we face. Millions died during the Cold War as the godless ideology of Communism sought to attain global hegemony. Today the jihadists are involved in the same cause. What we find happening all over the world is the outworking of this centuries-old ideology which has always thrived on bloodshed, fear and terror.

By the time this article is posted, things may have changed radically at Martin Place. For now, the area is in lockdown, and the whole world is focused on this. We can and we must of course pray as this terrible drama unfolds. So many innocent people are being directly impacted by all this.

If all this does indeed turn out to be yet another Islamic terror attack, it will hopefully serve as a real wakeup call. Our political leaders need to get real – they need to get with the program here. We must insist that our leadership stops playing games, stops the failed policy of appeasement, and starts getting real about an enemy which has vowed our destruction.

Having just watched some 6pm television news coverage from the mainstream media, I should mention that the ‘defend Islam at all costs’ offensive by clueless dhimmies is now in full swing. Many Muslim leaders were interviewed, all assuring us that this has nothing to do with Islam.

One even claimed that 99.99 per cent do not support terrorism. Um, no. We know that a good 10 to 20 per cent of Muslims do indeed support jihad and violence, and that figure is much higher in some countries. But trying to deceive a gullible West into believing that killing in the name of Islam has nothing to do with Islam is a classic tactic of the Muslim community, and their duped supporters in the media.

26 Replies to “Jihad in Sydney”